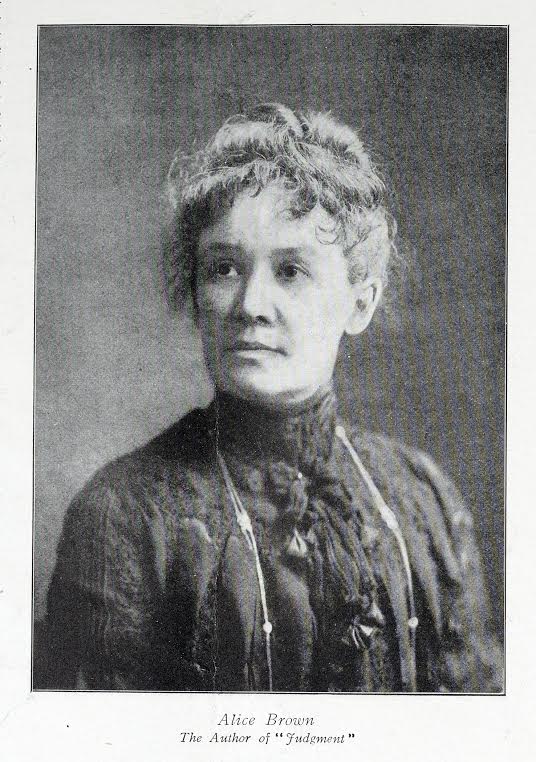 Known in her day as a “cornerstone in Boston’s most Bostonian life and lore,” after her death in 1948 Alice Brown’s vibrant regional writing faded from local and literary memory. However, a resurgence of interest in overlooked women authors of the nineteenth and twentieth centuries has prompted recent reprinting and reissues of numerous of Brown’s regional short story volumes, bringing her to the spotlight once again as a talented and central figure in New England local color writing.

Alice Brown was born in 1857 on a farm in Hampton Falls, New Hampshire, a small agricultural community about six miles from the sea that later acted as a template for the towns in her works. She attended Robinson Female Seminary in Exeter, where she displayed a talent for writing at a young age. After graduating in 1876 she taught there, “hating it more and more every minute.” Restless with her small town life, Alice moved to Boston in her early twenties to serve on the staff of The Christian Register, a bold move for a woman of her time. It was during her early years in Boston that Brown published her first novel Stratford by the Sea (1884), set in a small coastal community; it was this novel, with her rich descriptions and candid characters, that established Brown as a regional color writer.

Having begun a new editing job at Youth’s Companion, Brown began to draw attention from Boston’s literary elite. She made the acquaintance of Louise Imogen Guiney, a successful poet, and this became one of the most fruitful friendships of her personal and literary career. Guiney and Brown shared both a love of prose and a fondness for travel, and the two women spent ten weeks walking through the English countryside together in 1895. Upon their return, the friends founded the Women’s Rest Tour Association to provide reputable and reliable information to like-minded women about travel abroad. In 1896, Brown also published a series of essays about her travels with Guiney in her collection By Oak and Thorn. Guiney left to live in England in 1901, but the two stayed close friends until Guiney’s death in 1920. Brown wrote a tribute to her friend, Louise Imogen Guiney (1921), detailing and appreciating her friend’s life work and character.

Though remarkable for both her variety and volume of work, Brown was best known for her popular New England tales, mostly published from 1895 to 1910. Collected into volumes, her stories of idyllic New England life portray the traditional simplicity and bounteous goodness of country life. Tiverton Tales (1899), The Country Road (1906), Meadow Grass (1886), and Country Neighbors (1910) portray female protagonists in domestic spaces, with a leisurely pace, happy endings, and an unforced dialect. Some of the stories first saw print in Atlantic Monthly, Harper’s Monthly, and Harper’s Bazaar.

A great many other of Brown’s works were popular in her time. In 1914 she won the Winthrop Ames Prize in Drama for her play Children of the Earth, an award that carried a cash payout of $10,000. The Road to Castalay and Ellen Prior displayed Brown’s devotion to poetry. She also published a wide range of novels, ranging from her first book My Love and I (1896, published under the pseudonym Martin Redfield) to Willoughbys (1935). Other books include John Winterbourne’s Family (1910), The Prisoner (1916), Bromley Neighborhood (1917), and Dear Old Templeton (1927), which deal with darker themes of sexual repression and family strife.

Alice Brown’s later years were somewhat lonely—she never married—but she did enjoy a vibrant spiritual correspondence with Reverend Joseph M. Lelen of Falmouth, Kentucky for 18 years. They exchanged sentiments of faith and poems on occasion. Brown’s work fell to the wayside due to her mid-Victorian optimism and sentimentality as she aged into the 1930s. Brown died at Massachusetts General Hospital in 1948 at 91 years of age.

Brown was a dedicated member of the Athenæum during her time living in Boston, and also acted as a term president of the Boston Authors Club. Brown’s personal library, including autographed copies of books from her author friends, is housed at the Hampton Falls Free Library in Hampton Falls, New Hampshire. Some of her personal papers are available at the University of New Hampshire Library in Durham, and the rest of her personal material is kept at the Beinecke Rare Book and Manuscript Library at Yale University in New Haven.