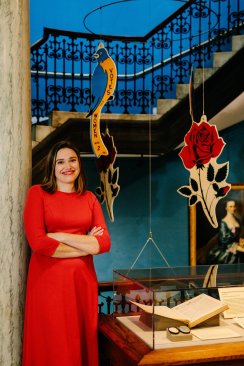 On the day Allison Lange and I spoke on the phone, she was working on a lecture about Victoria Woodhull, the first woman to run for president in the United States, as part of a series of lectures on 12 important women in American history for The Great Courses. She said, “It feels incredibly fitting to think about a past presidential race while we’re thinking about our current one. She’s fascinating! So radical early on in her life…She was also a spiritualist and the first woman to edit her own weekly newspaper. She did so many cool things!”

And just as it felt fitting to Lange to be focused on Woodhull in this election season, so too did it feel fitting to me to be talking with Lange, who is a leading expert on the history of the women’s suffrage movement (and also does “so many cool things!”).

Like so many others, Lange had heard of the BA, but needed a little extra push to come through the door. That necessary push was a fellowship from the New England Regional Fellowship Consortium in 2012 to conduct research for her doctoral work at Brandeis University. She arrived at 10½ Beacon Street having previously earned her MA from Brandeis and her BA from the University of Georgia, both in history.

Lange dove headlong into the Athenæum’s collections, examining a wide range of visual materials such as prints, photographs, and illustrated advertising cards to understand the images of gender that people were encountering on a regular basis. Over the course of her research, she studied a published account of Susan B. Anthony’s trial for voting, which became one of her favorite items in the collection. “The BA’s copy is…signed by Susan B. Anthony. It shows how proud of it she was—she wasn’t ashamed. She was proud of her arrest for voting and happy to share it with her friends and activists.”

In 2017, Lange returned to the Athenæum as a Mudge Teacher Fellow to develop a bibliography of the BA’s collections related to women’s suffrage (and the case against it). Her bibliography has informed the subsequent work of BA fellows, interns, and staff.

But lest you think Lange is the BA’s in-house historian (we could dream!), she has extensive accomplishments beyond the walls of the Vershbow Special Collections Reading Room. She served as historian for the United States Congress’s Women’s Suffrage Centennial Commission, helping to shape the national conversation about the centennial into a broad discussion on voting rights and making historical research accessible to general audiences. Locally, she curated exhibitions related to the centennial of the Nineteenth Amendment at the Massachusetts Historical Society and Harvard’s Schlesinger Library, and has lectured at multiple venues, including at the Boston Athenæum. She teaches history at Wentworth Institute of Technology, helping her students understand how the past influences current events.

Lange’s research at the Athenæum and work promoting and teaching women’s history, specifically the history of the women’s suffrage movement, has enabled multiple organizations to create exciting projects, including the BA’s 2020 Primary Sources in the Classroom workshop for educators and (Anti)SUFFRAGE exhibition. Lange embodies the legacy of the suffragists she studies, laying groundwork for others to succeed.