Home » Blog » And Kindness For All

And Kindness For All 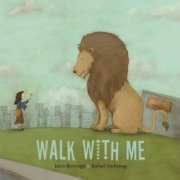 A list of books about immigrants, refugees, and empathy. For more, see the March 2017 list Immigrants and Refugees.

“In this moving and timely story, a young child describes what it is like to be a migrant as she and her father travel north toward the US border. They travel mostly on the roof of a train known as The Beast, but the little girl doesn’t know where they are going. She counts the animals by the road, the clouds in the sky, the stars. Sometimes she sees soldiers. She sleeps, dreaming that she is always on the move, although sometimes they are forced to stop and her father has to earn more money before they can continue their journey. As many thousands of people, especially children, in Mexico and Central America continue to make the arduous journey to the US border in search of a better life, this is an important book that shows a young migrant’s perspective.” — Provided by publisher.

Walk With Me by Jairo Buitrago, illus. by Rafael Yockteng

A little girl imagines a lion taking the place of her father who no longer lives with her family, an animal that keeps her safe on her travels from school to home.

The Name Jar by Yangsook Choi

After Unhei moves from Korea to the United States, her new classmates help her decide what her name should be.

The Matchbox Diary by Paul Fleischman, illus. by Bagram Ibatoulline

Follow a girl’s perusal of her great-grandfather’s collection of matchboxes and small curios that document his poignant immigration journey from Italy to a new country.

Watch the Stars Come Out by Riki Levinson, illus. by Diane Goode

Grandma tells about her mama’s journey to America by boat, years ago.

While helping his family in their work as migrant laborers far from their home, Tomás finds an entire world to explore in the books at the local public library.

Just in Case by Yuyi Morales

As Señor Calavera prepares for Grandma Beetle’s birthday he finds an alphabetical assortment of unusual presents, but with the help of Zelmiro the Ghost, he finds the best gift of all.

A Different Pond by Bao Phi, illus. by Thi Bui

“As a young boy, Bao Phi awoke early, hours before his father’s long workday began, to fish on the shores of a small pond in Minneapolis. Unlike many other anglers, Bao and his father fished for food, not recreation. Between hope-filled casts, Bao’s father told him about a different pond in their homeland of Vietnam.” — Provided by publisher

The Journey by Francesca Sanna

What is it like to have to leave everything behind and travel many miles to somewhere unfamiliar and strange? A mother and her two children set out on such a journey; one filled with fear of the unknown, but also great hope. Based on the author’s interactions with people forced to seek a new home, and told from the perspective of a young child.

The Princess and the Warrior by Duncan Tonatiuh

“Award-winning author Duncan Tonatiuh reimagines one of Mexico’s cherished legends. Princess Izta had many wealthy suitors but dismissed them all. When a mere warrior, Popoca, promised to be true to her and stay always by her side, Izta fell in love. The emperor promised Popoca if he could defeat their enemy Jaguar Claw, then Popoca and Izta could wed. When Popoca was near to defeating Jaguar Claw, his opponent sent a messenger to Izta saying Popoca was dead. Izta fell into a deep sleep and, upon his return, even Popoca could not wake her. As promised Popoca stayed by her side.” — Provided by publisher

Each Kindness by Jacqueline Woodson, illus. By E.B. Lewis

When Ms. Albert teaches a lesson on kindness, Chloe realizes that she and her friends have been wrong in making fun of new student Maya’s shabby clothes and refusing to play with her.

A boy must leave his home and find another. He brings with him a teacup full of earth from the place where he grew up, and sets off to sea.

In 1960s New York, fifth-grader Ruthie, a Cuban-Jewish immigrant, must rely on books, art, her family, and friends in her multicultural neighborhood when an accident puts her in a body cast.

The Epic Fail of Arturo Zamora by Pablo Cartaya

Arturo’s Miami summer is marked by the arrival of poetry enthusiast Carmen, who helps him use the power of protest to fight the plans of a land developer who wants to demolish his Abuela’s restaurant.

Lulu and the Dog from the Sea by Hilary McKay

Seven-year-old Lulu and her cousin think their vacation house is the most perfect place ever until they find a trouble-prone, stray dog living on the beach.

The First Rule of Punk by Celia C. Pérez

Twelve-year-old María Luisa O’Neill-Morales (who really prefers to be called Malú) reluctantly moves with her Mexican-American mother to Chicago and starts seventh grade with a bang—violating the dress code with her punk rock aesthetic and spurning the middle school’s most popular girl in favor of starting a band with a group of like-minded weirdos.

Esperanza and her mother are forced to leave their life of wealth and privilege in Mexico to go work in the labor camps of Southern California, where they must adapt to the harsh circumstances facing Mexican farm workers on the eve of the Great Depression.

A Land of Permanent Goodbyes by Atia Abawi

After their home in Syria is bombed, Tareq, his father, and his younger sister seek refuge, first with extended family in Raqqa, a stronghold for the militant group, Daesh, and then abroad.

The House on Mango Street by Sandra Cisneros

“ The House on Mango Street tells the story of Esperanza Cordero, whose neighborhood is one of harsh realities and harsh beauty. Esperanza doesn’t want to belong–not to her run-down neighborhood, and not to the low expectations the world has for her. Esperanza’s story is that of a young girl coming into her power, and inventing for herself what she will become.” — Provided by publisher

” … three kids go on harrowing journeys in search of refuge. All will face unimaginable dangers — from drownings to bombings to betrayals. But there is always the hope of tomorrow. And although Josef, Isabel, and Mahmoud are separated by continents and decades, shocking connections will tie their stories together in the end.” — Provided by publisher

“Fifteen-year-old Ari Mendoza is an angry loner with a brother in prison, but when he meets Dante and they become friends, Ari starts to ask questions about himself, his parents, and his family that he has never asked before.” — Provided by publisher

The Inexplicable Logic of my Life by Benjamin Alire Sáenz

Sal used to know his place with his adoptive gay father, their loving Mexican American family, and his best friend, Samantha. But it’s senior year, and suddenly Sal is throwing punches, questioning everything, and realizing he no longer knows himself. If Sal’s not who he thought he was, who is he?

I Am Not Your Perfect Mexican Daughter by Erika L. Sánchez

“Perfect Mexican daughters do not go away to college. And they do not move out of their parents’ house after high school graduation. Perfect Mexican daughters never abandon their family.But Julia is not your perfect Mexican daughter. That was Olga’s role. Then a tragic accident on the busiest street in Chicago leaves Olga dead and Julia left behind to reassemble the shattered pieces of her family. And no one seems to acknowledge that Julia is broken, too. Instead, her mother seems to channel her grief into pointing out every possible way Julia has failed. But it’s not long before Julia discovers that Olga might not have been as perfect as everyone thought.” — Provided by publisher

The Arrival by Shaun Tan

In this wordless graphic novel, a man leaves his homeland and sets off for a new country, where he must build a new life for himself and his family.

Her Right Foot by Dave Eggers, illus. by Shawn Harris

In this honest look at the literal foundation of our country, Dave Eggers and Shawn Harris investigate a seemingly small trait of America’s most emblematic statue. What they find is about more than history, more than art. What they find in the Statue of Liberty’s right foot is the message of acceptance that is essential to an entire country’s creation.

“A desperate last hope for safety and freedom. The plight of refugees risking their lives at sea has, unfortunately, made the headlines all too often in the past few years. This book presents five true stories, from 1939 to today, about young people who lived through the harrowing experience of setting sail in search of asylum: Ruth and her family board the St. Louis to escape Nazism; Phu sets out alone from war-torn Vietnam; José tries to reach the United States from Cuba; Najeeba flees Afghanistan and the Taliban; and after losing his family, Mohamed abandons his village on the Ivory Coast in search of a new life.” — Provided by publisher

This Land is Our Land: A History of American Immigration by Linda Barrett Osborne

“This book explores the way government policy and popular responses to immigrant groups evolved throughout U.S. history and the fundamental ways in which immigration forms an essential part of the American identity. The book also recounts the experiences of three centuries of immigrants in their own words.” — Provided by publisher

“As a child in Pakistan, Malala made a wish for a magic pencil. She would use it to make everyone happy, to erase the smell of garbage from her city, to sleep an extra hour in the morning. But as she grew older, Malala saw that there were more important things to wish for. She saw a world that needed fixing. And even if she never found a magic pencil, Malala realized that she could still work hard every day to make her wishes come true.” —Provided by publisher