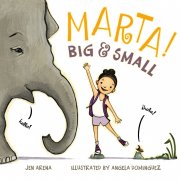 Marta! Big and Small by Jen Arena with illustrations by Angela Dominguez

In this story that incorporates Spanish words, Marta explores the world of opposites and animals.

Count the Monkeys by Mac Barnett

The reader is invited to count the animals that have frightened the monkeys off the pages.

One Day in the Eucalyptus, Eucalyptus Tree by Daniel Bernstrom with illustrations by Brendan Wenzel

Gobbled by a snake, a crafty boy finds a find a way out of his predicament by encouraging the snake to eat an increasing number of animals.

Badger Girl is delighted to find the biggest turnip she has ever seen growing in her vegetable garden, but when the time comes to harvest the giant root, she is unable to pull it up without help from family and friends.

Adrian Simcox Does Not Have a Horse by Marcy Campbell

“Adrian Simcox brags about owning a horse, and Chloe just knows he’s making stuff up … until she learns an important lesson in empathy.” —Provided by publisher

Introduces many different species of sharks, pointing out such characteristics as the small size of the dwarf lantern shark and the physical characteristics and behavior that makes sharks killing machines.

Maria Had a Little Llama by Angela Dominguez

In this bilingual version of the classic rhyme, set in Peru, Maria takes her llama to school one day.

Ducks Away! by Mem Fox

One by one five little ducklings tumble off the bridge into the river below—and mother duck follows them.

Mr. and Mrs. Mallard proudly return to their home in the Boston Public Garden with their eight offspring.

Let Me Finish! by Minh Lê

“A young boy wants to read his favorite books without interruption, but the creatures around him keep spoiling the ending!” —Provided by publisher

In simple text, a set of animals, each one linked to the previous one by some trait of shape, color, or pattern, greet and interact with one another.

Tiger vs. Nightmare by Emily Tetri

“Tiger is a very lucky kid: she has a monster living under her bed. Every night, Tiger and Monster play games until it’s time for lights out. Of course, Monster would never try to scare Tiger–that’s not what best friends do. But Monster needs to scare someone … it’s a monster, after all. So while Tiger sleeps, Monster scares all of her nightmares away. Thanks to her friend, Tiger has nothing but good dreams. But waiting in the darkness is a nightmare so big and mean that Monster can’t fight it alone. Only teamwork and a lot of bravery can chase this nightmare away.” —Provided by publisher

Fox decides to become a tiger because they are fast and sneaky, and soon, his other animal friends are joining in.

Days With Frog and Toad by Arnold Lobel

Frog and Toad spend their days together, but find sometimes it’s nice to be alone.

The Tiger Rising by Kate DiCamillo

Rob, who passes the time in his rural Florida community by wood carving, is drawn by his spunky but angry friend Sistine into a plan to free a caged tiger.

Mercy Watson to the Rescue by Kate DiCamillo

After Mercy the pig snuggles to sleep with the Watsons, all three awaken with the bed teetering on the edge of a big hole in the floor.

The Wind in the Willows by Kenneth Graham

“Friendly Rat, mild-mannered Mole, wise Badger, and kind—but conceited—Toad all live on the banks of the Thames. While Mole and Rat are content to go out in a row boat or travel the roads in a caravan, Toad prefers the excitement of motor cars. He’s already wrecked seven! While his friends try to keep him out of trouble, his passion for cars eventually results in his being caught and kept prisoner in the remotest dungeon of the best-guarded castle in all the land. Somehow, he has to escape and get home but what will he find when he gets there?” —Provided by publisher

Roy, who is new to his small Florida community, becomes involved in another boy’s attempt to save a colony of burrowing owls from a proposed construction site.

The Beasts of Clawstone Castle by Eva Ibbotson

While spending the summer with elderly relatives at Clawstone Castle in northern England, Madlyn and her brother Rollo, with the help of several ghosts, attempt to save the rare cattle that live on the castle grounds.

“Twelve-year-old Sophie Brown feels like a fish out of water when she and her parents move from Los Angeles to the farm they’ve inherited from a great-uncle. But farm life gets more interesting when a cranky chicken appears and Sophie discovers the hen can move objects with the power of her little chicken brain: jam jars, the latch to her henhouse, the entire henhouse…. And then more of her great-uncle’s unusual chickens come home to roost. Determined, resourceful Sophie learns to care for her flock, earning money for chicken feed, collecting eggs. But when a respected local farmer tries to steal them, Sophie must find a way to keep them (and their superpowers) safe. Told in letters to Sophie’s abuela, quizzes, a chicken-care correspondence course, to-do lists, and more, Unusual Chickens is a quirky, clucky classic in the making.” —Provided by publisher

The adventures of Christopher Robin and his friends, in which Pooh Bear uses a balloon to get honey, Piglet meets a Heffalump, and Eeyore has a birthday.

Dog Man, a crimefighter with the head of a police dog and the body of a policeman, faces off against his archnemesis Petey the Cat.

“Some Pig. Humble. Radiant. These are the words in Charlotte’s Web, high up in Zuckerman’s barn. Charlotte’s spiderweb tells of her feelings for a little pig named Wilbur, who simply wants a friend. They also express the love of a girl named Fern, who saved Wilbur’s life when he was born the runt of his litter.” —Provided by publisher

“Stuart Little is no ordinary mouse. Born to a family of humans, he lives in New York City with his parents, his older brother George, and Snowbell the cat. Though he’s shy and thoughtful, he’s also a true lover of adventure.” —Provided by publisher

The Golden Compass by Philip Pullman

Accompanied by her daemon, Lyra Belacqua sets out to prevent her best friend and other kidnapped children from becoming the subject of gruesome experiments in the Far North.

Bonkers About Beetles by Owen Davey

Did you know that the horned dung beetle can pull over a thousand times its own weight? With over 400,000 known species of beetles on earth, there are endless curious crawling creatures to discover! Shares information on different types of beetles.

Owen & Mzee: The True Story of a Remarkable Friendship by Isabella Hatkoff, Craig Hatkoff, and Dr. Paula Kahumbu with photographs by Peter Greste

“This book has been adapted from the original e-book, Owen and Mzee, … which was first launched on the WNBC New York Five O’Clock News, April 29, 2005, as part of the Tribeca Film Festival.” —Provided by publisher

The Brilliant Deep: Rebuilding the World’s Coral Reefs by Kate Messner with illustrations by Matthew Forsythe

Looks at the life of the coral restoration pioneer Ken Nedimyer, from his early fascination with the ocean to his ongoing efforts to save and rebuild the world’s coral reefs.

Reptiles and Amphibians by Simon Mugford

Sea Otter Heroes: The Predators that Saved an Ecosystem by Patricia Newman

“Marine biologist Brent Hughes discovered a surprising connection between sea otters and sea grass at an estuary in northern California. Follow science in action as Hughes conducts the research that led to this major discovery.” —Provided by publisher

From the Sibert medal winning author of Team Moon and the bestselling Girls Think of Everything comes a riveting, timely account of panda conservation efforts in China, perfect for budding environmentalists and activists.