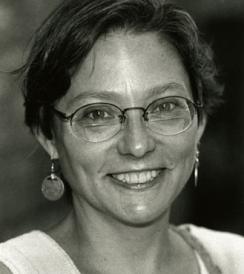 Why doesn’t anyone in the South End sit on their front stoops anymore?  How did female college students circumvent their curfews in the 1960s? What was it like to live in the same neighborhood as God?  For answers to these questions, look no further than Athenæum member Anne Alison Barnet’s South End News column – “Alison’s Adventures.”

Barnet moved to the South End in 1964 as a Boston University student.  This may come as a surprise to anyone who sees her apartment filled with books, posters, photos and other South End paraphernalia, but Barnet was actually born in Staten Island, NY.  It was there at the age of nine that she wrote her first short story in a diary with a lock and key—a piece of “true crime” about a neighborhood boy who took out his friend’s eye with a BB gun.  In a finale rather appropriate to our current Edward Gorey exhibition, the sharpshooter’s parents buy the aggrieved friend a Superman suit—which he dons—but not being able to see very well with only one eye—eventually flies into a glass window and breaks his hand.  Since then, Barnet has never been without a journal for recording the bizarre and unconventional.  Even her gym bag has one.

But these days, it is most certainly the South End that drives her writing.  In fact, it wasn’t until she learned that her great-grandfather had lived in the South End that she began research for her book Extravaganza King: Robert Barnet and Boston Musical Theater.  So began a ten year journey into the life of a prosperous sugar merchant, who in the 1890s turned librettist, director, stage manager, and costume designer in order to raise funds for the building of the armory of the First Corps of Cadets in Boston.  His “extravaganzas,” with their lavish productions and enormous casts, featured cadets and many male Harvard graduates trained in the Hasty Pudding tradition.  The men played the female roles and these “hefty, muscular leading ladies raised laughter rather than eyebrows from the audiences of prominent Bostonians who attended the shows.”

By the time Barnet joined the Boston Athenæum in the late 1990s, she had mostly completed her manuscript for Extravaganza King.  Nevertheless, when her volunteer work in the art department allowed, she amused herself by looking up Robert Barnet and his friends in the Harvard directories and alumni books.  When asked what she likes best about being an Athenæum member, she replied, “I feel like in here I can just go around and find things that interest me and nobody’s going to bother me…I crave quiet.”

At present, Barnet is spending these quiet moments preparing a series of articles and lectures on “obscure and eccentric” South End residents, such as Dr. Merrill Moore, who was both psychiatrist and poet and Lorin Deland, who was not only a businessman and advertising pioneer, but an actor who spent his free time assisting unwed mothers.  While other resident historians have tended to focus on the neighborhood’s architecture, churches and sports teams, Barnet says her interest will always be primarily in the neighborhood’s people.  Her former landlady, the Franklin Square House porters (a.k.a. “eunuchs”) and Mel Lyman, who declared himself God in the late 1960s a few blocks from Barnet’s student residence, make frequent appearances in her writing.  If you’d like to become further acquainted with Barnet’s wry sense of humor and the extraordinary cast of characters she has immortalized in prose, just check out her articles in the South End News or attend one of the lectures she gives periodically at her local library and the South End Historical Society.  Rumor has it she showed up at the last one dressed as a 1970s rooming house landlady.