Back to School: September 2021 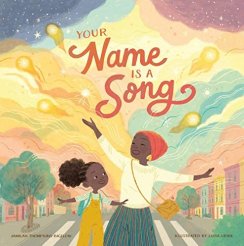 It’s that time of year again! Here are books to enjoy all about school, even some for those who don’t go to school just yet.

Your Name is a Song by Jamilah Thompkins-Bigelow, illustrated by Luisa Uribe
(Children Picture Book + THOMP)
A young girl meets her mother after the first day of school and is distraught after so many teachers and students mispronounced her name. On their walk home, the mother explains the musicality of the child’s name and other names from various cultures. The next day the girl feels empowered to share this knowledge with her class and teach them all to sing her name.

All Are Welcome by Alexandra Penfold and Suzanne Kaufman
(Children Picture Book + PENFO)
In this book you will meet a class of children from all different backgrounds. Every child and adult are welcomed and appreciated for their differences.

Don’t Let the Pigeon Drive the Bus by Mo Willems
(Children Picture Book WILLE)
This hilarious classic focuses on a pigeon as he pleads with the reader to let him drive the bus when the usual driver steps away.

Lilly’s Purple Plastic Purse by Kevin Henkes
(Children’s Picture Book HENKE)
Lilly loves school! She is especially excited for today because she gets to share her purple purse at show-and-tell time. Her excitement leads to impatience, however, and her teacher has to take her purse away because she can’t wait her turn. In anger, Lilly does something she will later regret. Will she be able to apologize?

Gaspard and Lisa’s Ready for School Words by Anne Gutman and Georg Hallensleben
(Children Picture Book GUTMA)
Two puppies go off to nursery school and learn school vocabulary along the way. The perfect book to help little ones adjust to daycare or preschool.

George by Alex Gino
(PZ7.G379 Ge 2015)
Everyone thinks George is a boy. It is what she looks like from the outside. But she knows she is truly a girl. When her teacher announces they will be performing a play of Charlotte’s Web, George really wants to play Charlotte. The teacher won’t allow her because she is biologically a boy. With the help of her best friend, George comes up with a plan not only to get the part but also to live as her true self. This humorous and heartwarming tale of a young trans girl won the Stonewall Children’s award in 2016.

Amina’s Voice by Hena Khan
(PZ7.K496 Am 2017)
The start of middle school has shaken up Amina’s life. Her best friend Soojin has started hanging out with the “cool” girls at school and is thinking of changing her name to something more American sounding. Does Amina need to change too? She loves her Pakistani culture, but also wants to fit in. This stress about her identity is magnified when her local mosque is vandalized. Amina will need to raise her voice and bring the community together.

Merci Suárez Changes Gears by Meg Medina
(PZ7.M5128 Me 2018)
As a scholarship student, Merci has never felt at home at her private school among all her wealthy peers. The start of sixth grade brings drama at school when mean girl Edna focuses her jealousy on Merci. At home, her grandfather has begun acting strangely. He is forgetting things, falling off his bike, and has a short temper. No one in her family will tell her what is wrong. Join Merci as she navigates all of these changes with humor and heart.

The School Story by Andrew Clements, illustrated by Brian Selznick
(PZ7.C59118 Sc 2001)
Twelve year old Natalie has written a book. She and her best friend, Zoe, believe it will be the next best seller. But how can a middle schooler get a book published? Good thing Zoe has a plan! Natalie can submit the book under a pen name and Zoe can pretend to be her agent. Will the girls be able to fool the publishers into thinking that they are grown ups?

The School for Good and Evil by Soman Chinani, illustrated by Iacopo Bruno
(PZ7.C34874 Sc 2013)
Sophia knows she will fit in with the other princesses at the School for Good. She has the glass slippers and everything. Agatha, dressed in all black with her black cat always close by, seems like she is destined to join the villains at the School For Evil. Despite how the two girls appear, they are placed in the opposite schools: Sophia with the villains and Agatha with the fair maidens. Was it a mistake or the first step to the girls finding out who they really are?

Smile by Raina Telgemeier
(PZ7.T245 Sm 2010)
Raina is looking forward to a nice normal year in sixth grade. That is, until she falls after girl scouts and injures her two front teeth! She then has to deal with braces, headgear, and retainers on top of all the typical drama at school. This graphic novel hilariously follows her failures and triumphs of sixth grade.

New Kid by Jerry Craft, with color by Jim Callahan
(PZ7.C8844 Ne 2019)
Jordan loves to draw cartoons and was hoping his parents would send him to the art school of his dreams. Instead, they enroll him at a prestigious private school where he is one of the only kids of color. He finds he doesn’t fit in at this new school and starts to feel like he doesn’t fit in in his neighborhood either. Will he be able to navigate this new school culture and stay true to himself?

The Absolutely True Diary of a Part-Time Indian by Sherman Alexie, illustrated by Ellen Forney.
(PZ7.A382 Ab 2007)
Junior leaves his troubled school on the Spokane reservation for an all white farm town high school. When he arrives, he finds the only other Native American there is the mascot. He will have to learn to navigate this new school and very different culture. This laugh out loud funny story is partly based on the author’s own experience growing up on a reservation, but attending a predominantly white school.

Blue Sargent has been warned her entire life that if she kisses her true love, he’ll die. Being the only non-psychic in a family of mediums, Blue is used to this sort of warning. Regardless, she lives by two rules: never kiss anyone, and stay away from the Raven Boys, aka the students of prestigious Aglionby Academy. While joining her aunt for a reading, Blue is forced to confront both of her rules. She sees the ghost of a boy wearing an Aglionby sweater, which can only mean one thing: He’s her true love, and she killed him. This richly written book will keep you enthralled. Luckily, the rest of the series is available.

Etiquette & Espionage by Gail Carriger
(PZ7.C23455 Eti 2013)
Sophronia’s family is desperate for her to learn manners and start acting like a lady, so they enroll her in Mademoiselle Geraldine’s Finishing Academy for Young Ladies of Quality. When she arrives, Sophronia discovers that the school is not quite what her mother thought it would be. In addition to learning the arts of dance, dress, and etiquette, the young women also learn how to hide behind politeness to become master spies.

This Promise of Change : one girl’s story in the fight for school equality by Jo Ann Allen Boyce and Debbie Levy
(F444.C68 B69 2019)
This autobiography tells the story of Jo Ann Allen, one of the “Clinton 12,” the first group of Black students to integrate into an all white public high school in the American South. The eastern Tennessee town’s bigotry was masked with false southern courtesies. That is, until the school integrated and a much darker side of the town’s white population came to the surface. The Clinton 12 faced extreme bigotry and violence as they tried to attend the high school. This heartbreaking personal account brings a new light to this historic moment, highlighting that among this national attention and historic pressure, Jo Ann also wanted to live life as a normal teenager. She wanted to play music, hang out with friends, and learn as white students were able to do without combating bigotry.

Emergency Contact by Mary H.K. Choi
(PZ7.C44623 Em 2018)
Penny is happy to leave her self proclaimed mediocre life behind when she heads to college. Sam is stuck at a job in a coffee shop with just seventeen dollars in his bank account. When the two meet, it is far from a “meet cute.” Despite the awkward introduction, the two share numbers and quickly begin sharing everything with each other over text. Where will this digital relationship take them?

Fangirl by Rainbow Rowell
(PZ7.R79613 Fan 2013)
Cath is hoping college won’t change a thing between her and her twin sister, Wren. They are enrolled at the same school after all. Wren has other plans. Hoping to flourish on her own, she has requested that they not be roommates. Cath is left overwhelmed on her own. Her surly roommate with an ever present, overly friendly boyfriend doesn’t help her feel any more at home. She finds solace in writing fanfiction about her favorite fantasy world. But will she be able to find that same confidence in real life?