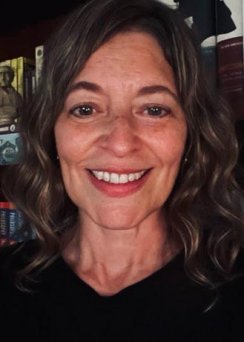 Brouillette has lovingly nurtured the tenet that it’s never too late to explore one’s curiosities, wasting no time in putting them into action. A lifelong learner, seasoned cellist, solo traveler, and designer of themed European experiences, she has recently welcomed feature screenwriting into her world.

Mainly self-educated through books, scripts, movies, and podcasts, Brouillette completed her first screenplay in 18 months, before submitting to various competitions for judge scores and critique notes. She is now in the feedback rewrite stage.

On a cloudy afternoon, tucked away in one of the many private spaces in the Boston Athenæum, we were lucky enough to be able to speak with a member who recently wrote her very first screenplay. As it is with a great number of those who now call the Athenæum a home away from home, Brouillette hadn’t heard of the library until walking by one day with a friend who pointed it out to her. Before the week was over, Barb had joined the ranks of a select group of Bostonians who are brought together not only by the awe-inspiring architecture and design of the building, but also by their deep love and appreciation for reading, learning, and sharing knowledge with others.

Brouillette spent countless hours writing, revising, and rewriting her screenplay within our institution, considering spots like the silent fifth floor and the Art Department to be sacred spaces. When asked to discuss her favorite locations in the library, Brouillette (like many members before her) gave away a few special locations, but kept the most important and well-loved to herself.

“It’s never too late to try something new…”

BARB BROUILLETTE: I started dreaming up some of these ideas long before COVID, but I figured I’d take the opportunity during the quarantine period, which provided a lot of good solitary time to put the project in motion.

A screenplay is meant to be a map…a blueprint. It’s not really meant to be overly flowering narrative, it’s meant to be very succinct in action descriptions, and as much as I love this format it’s not without strict industry guidelines. It has to be a certain number of pages, for each genre, a certain font, a specific format. Even when you can’t be too narrative in your action description, you can still be creative and selective in your word choice and order, so that you’re making suggestions to the camera. You can’t really make camera or lighting suggestions, editing ideas, or music choices in there—that’s for the professionals and they know what they’re doing. I’m just here to tell a story. You can be creative with how you suggest things so that the camera might have a certain focal point.

A screenwriter’s main goal is a tricky one: to give the audience the same vision that you have. The tricky thing is that a script is ultimately meant to be seen and not read, which causes you to approach it differently.

Q: Can you take us through your writing process for this project?

BB: I have never done anything formal before, never done any kind of writing project. This was my first ever. I haven’t taken any classes on it. I’m fully self-educated through books and scripts. It took about 18 months, but it took two things: learning how to write a screenplay, and then after that, actually writing the screenplay.

Maybe the next story I do will be different, but this one is a crime thriller that takes place in Oxford. The main character is a musician whose instrument is being hunted down. She isn’t sure why until the end of the story.

At first I wanted to do this project only for myself, known only to me. The more I got involved, and the more I got attached to my characters, the more interested I was to receive feedback on my script. So, I entered competitions in an attempt to see an unbiased opinion on my work. I just wanted to get judge scores and critique back, wanted to manage my expectations and see where I was.

[When we spoke to Brouillette, she had just gotten her manuscript back from a few different competitions, and with it, feedback.]

“…if we only do what is comfortable, what is life?”

A theme of the script is that living to meet others’ expectations is not living. We have to be our authentic selves, instead of what others want to pressure us into being.

The rewrite process was difficult—there are so many different ways to go about doing a rewrite, and for this project it was better for me to go back and focus on one thing at a time (characterization, storytelling, etc) rather than rushing to put it all together at once.

BB: I started the cello at 29 years old…I knew I wasn’t going to be a concert soloist, but I wanted to see how far I could go with it. Doesn’t have to be a big, thriving career, but I’ve played with different orchestras and thoroughly enjoy my time.

This screenplay has been so much work, but I have been having the best time! It’s like putting a puzzle together. I love problem solving.

Q: What are some favorite scripts you’ve read?

BB: Alien, Sideways, and Chinatown are strong examples of what a screenplay should be. They’re well paced, everything has a purpose in the script, they have an even read (the page has a lot of white), succinct action sequences, and there are lovable/relatable characters for the audience to get to know and share some commonalities with.

Q: What are you reading now?

BB: I’m reading Directed By James Burrows—if you’re a fan of Cheers, Friends, Will & Grace, you’re gonna have seen that name hundreds of times. I’ve always had a creative crush on James Burrows…not only is he a genius with what he does and knows how to get the most out of his actors, he is also a very welcoming presence. He is an approachable person who wants to foster a collective effort, which seems an admirable quality for directors.

After writing the screenplay, I feel as though I am a much different viewer of movies and television. I feel as though I’m paying a lot more attention to the credits. I think I just take for granted so much that when we look at a final work, it looks like it just came together so naturally, when really there was so much involved! Big choices, little choices, everything that comes together just makes the end result look effortless. All those little details make a scene impactful (or not).