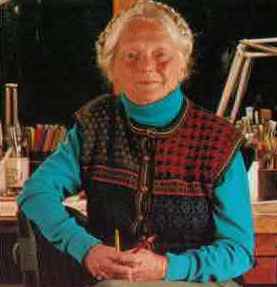 Barbara Cooney brought us the lively and lovely images in such children’s book classics as Miss Rumphius (The Lupine Lady) and Hattie and the Wild Waves.  While her favorite places were the beautiful wilds of Maine, Cooney has lived, traveled, and illustrated a great variety of places and stories.

Cooney was born in Brooklyn, New York on August 6, 1917, to stockbroker father, Russell Schenck Cooney and amateur painter mother, Mae Evelyn Bosser.  She had three brothers, two younger and another who was her twin.  The nature of her father’s work kept the family near the bustle of the city, though Cooney preferred the Maine countryside near her Grandmother’s residence.  To keep herself entertained, young Cooney played with her mother’s oil paints and watercolors.  As long as Cooney cleaned the paint brushes, her mother left her to explore and create, a freedom the yet-to-be illustrator appreciated.

Cooney was sent to boarding school as a child and later went on to Smith College as a young adult.  She graduated from Smith in 1938 with a degree in art history. Eager to put this accomplishment to use, Cooney decided to transform her portfolio into a new career: children’s illustrator.  She improved her artistic skills by taking printmaking classes at the Art Students League in New York City, and she began showing her work to publishers in the area.

Her plans were disrupted by World War II, and in 1942 she enrolled in the Women’s Army Corps, eventually reaching the rank of second lieutenant.  She left the Corps upon her marriage to Guy Murchie Jr. and becoming pregnant with her first child.  The couple divorced in 1947, and Cooney devoted herself full-time to her work as an illustrator as a means to support her family, now of two children.  Two years later, Cooney remarried, this time to physician Charles Talbot Porter, and the growing family moved to Pepperell, Massachusetts.

For many years, Cooney was known for her scratchboard, limited-color art style.  While this approach had an affinity with folk-tale-based books and with Cooney’s print-making skills, it was not a decision made wholly by choice.  The black-and-white, or three-color limit was partly imposed to reduce the printing expenses of the publishers and partly self-inflicted as Cooney worked to develop her lacking technical skills in different mediums.  As can been seen in the sheer volume of her work as an illustrator, Cooney eventually became a master in the high-contrast, scratchboard style that brought her initial fame.  She continued to experiment in art mediums, later branching out to make magnificent works in colored pencils and watercolor.

By 1949, Cooney was illustrating numerous books per year, and ten years later, after being involved in over a dozen published projects, her illustrated adaptation of Chaucer’s “Nun’s Priest Tale,” Chanticleer and the Fox, won her the Caldecott Medal.  She was thirty-two years old.

Over the next several decades, Cooney continued to illustrate and write children’s books. She traveled and researched in order to grasp the details of foreign folklore, unfamiliar landscapes, and indigenous art styles of the culture and story at hand.  These locations sometimes included far-away destinations such as France, Spain, Switzerland, Ireland, England, St. Lucia, and Haiti.  But some projects kept her closer to home, studying and sketching in New England.  Her pursuit of historical research brought her to the Boston Athenæum.  Her illustrations for a story set in Maine, The Ox-Cart Man, won Cooney won her second Caldecott Medal in 1979.

Enjoying great success and achievement late in life, Cooney worked steadily on new books up until her death in 2000 at the age of eighty three at her dream house in Maine.  Cooney has sometimes been described as a “librarians’ illustrator,” choosing understated but rich stories to illustrate.  She even gave a nod to librarians everywhere by bestowing that profession on the title character Miss Rumphius (the Lupine Lady).  Her stories are for lovers of New England landscapes, playful characters, and the subtle and beautiful of everyday life.