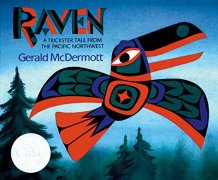 Raven: A Trickster Tale from the Pacific Northwest by Gerald McDermott

Raven, the trickster, wants to give people the gift of light. But can he find out where Sky Chief keeps it? And if he does, will he be able to escape without being discovered? His dream seems impossible, but if anyone can find a way to bring light to the world, wise and clever Raven can!

Pecking his way through the door of a house, an intrepid little woodpecker busily raps on a rhyming sequence of indoor objects, from a hat and a mat and a racket and jacket to a teddy bear and a book called Jane Eyre.

The Lion and the Bird by Marianne Dubuc; translated from the French by Claudia Z. Bedrick

“A lion finds a wounded bird in his garden and decides to care for it through the winter. When spring arrives, the bird’s flock returns. The bird goes off with its flock. Lion is sad. But autumn brings a wonderful surprise.” —Provided by publisher.

Throughout the day and into the night various birds sing their songs, beginning with the woodpecker who taps a pole ten times and counting down to the hummingbird who calls once.

Fascinated by the colors, shapes, sounds, and movements of the many different birds she sees through her window, a little girl is happy to discover that she and they have something in common.

When his best friend is lost in a terrible storm, an intrepid young puffin teams up with a big blue whale to mount a rescue mission and discovers that while many other birds match his friend’s description, none are quite the same.

Little Penguin, who has the “soul of an eagle,” enrolls in flight school.

Little Owl enjoys a lovely night in the forest visiting his friend the raccoon, listening to the frogs croak and the crickets chirp, and watching the fog that hovers overhead.

The injured raven Arabel’s father brings home can say only “Kaark” and “Nevermore” but he still manages to make great changes in the family’s life.

Summer and Bird by Katherine Catmull

In the world of Down, young sisters Summer and Bird are separated and go in very different directions as they seek their missing parents, try to vanquish the evil Puppeteer, lead the talking birds back to their Green Home, and discover the identity of the true bird queen.

Roy, who is new to his small Florida community, becomes involved in another boy’s attempt to save a colony of burrowing owls from a proposed construction site.

As Palmer comes of age, he must either accept the violence of being a wringer at his town’s annual Pigeon Day or find the courage to oppose it.

The Trumpet of the Swan by E. B. White

Knowing how to read and write is not enough for Louis, a voiceless Trumpeter Swan; his determination to learn to play a stolen trumpet takes him far from his wilderness home.

The Raven Boys by Maggie Stiefvater

Though she is from a family of clairvoyants, Blue Sargent’s only gift seems to be that she makes other people’s talents stronger, and when she meets Gansey, one of the Raven Boys from the expensive Aglionby Academy, she discovers that he has talents of his own — and that together their talents are a dangerous mix.

The Boy Who Drew Birds: A Story of John James Audubon by Jacqueline Davies; illustrated by Melissa Sweet

As a boy, John James Audubon loved to watch birds. In 1804, at the age of eighteen, he moved from his home in France to Pennsylvania. There he took a particular interest in peewee flycatchers. While observing these birds, John James became determined to answer a pair of two-thousand-year-old questions: Where do small birds go in the winter, and do they return to the same nest in the spring?

An intimate view of the fascinating world of the hummingbird—a tiny bird that, from morning to night, spring to winter, works nonstop.

A red tail hawk and his mate build their nest near the top of a Fifth Avenue apartment building and bird watchers gather hoping to see the chicks in the nest.

The Race to Save the Lord God Bird by Phillip Hoose

Tells the story of the ivory-billed woodpecker’s extinction in the United States, describing the encounters between this species and humans, and discussing what these encounters have taught us about preserving endangered creatures.

On remote Codfish Island off the southern coast of New Zealand live the last 91 kakapo parrots on earth. Originally this bird numbered in the millions before humans brought predators to the islands. Now on the isolated island refuge, a team of scientists is trying to restore the kakapo population.