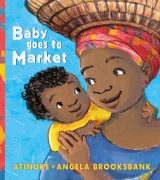 Brothers of the Knight by Debbie Allen, illus. by Kadir Nelson

In this contemporary retelling of the fairy tale “Twelve Dancing Princesses” from the Brothers Grimm, an African-American reverend in Harlem endeavors to discover why the shoes of his twelve sons are worn to pieces every morning.

Baby Goes to Market by Atinuke, illus. by Angela Brooksbank

Join Baby and his doting mama at a bustling southwest Nigerian marketplace for a bright, bouncy read-aloud offering a gentle introduction to numbers.

A young boy rides the bus across town with his grandmother and learns to appreciate the beauty in everyday things.

When’s My Birthday? by Julie Fogliano, illus. by Christian Robinson

Children excitedly discuss the details of their upcoming birthdays.

Thank You, Omu! by Oge Mora

When the aroma of Omu’s homemade stew fills the air, her neighbors arrive, one by one, for a taste until all is gone except for her generous spirit.

“A young Muslim girl puts on a head scarf and not only feels closer to her mother, she also imagines herself as a queen, the sun, a superhero, and more.”

When Mama’s pregnancy draws attention away from Gia, she worries that the special bond they share will disappear forever once the baby is born.

The Day You Begin by Jacqueline Woodson, illus. by Rafael Lopez

Other students laugh when Rigoberto, an immigrant from Venezuela, introduces himself but later, he meets Angelina and discovers that he is not the only one who feels like an outsider.

The Crossover by Kwame Alexander

“In this middle grade novel in verse that’s Love That Dog meets The Watsons Go to Birmingham meets Slam, twelve-year-old twin basketball stars Josh and Jordan wrestle with highs and lows on and off the court as their father ignores his declining health.”—Provided by publisher

Born on Water Island in the Virgin Islands during a hurricane, which is considered bad luck, twelve-year-old Caroline falls in love with another girl—and together they set out in a hurricane to find Caroline’s missing mother.

“When seventh-grader Mango Delight Fuller accidentally breaks her BFF Brooklyn’s new cell phone, her life falls apart. She loses her friends and her spot on the track team, and even costs her father his job as a chef. But Brooklyn’s planned revengesneakily signing up Mango to audition for the school musical—backfires when Mango not only wins the lead role, but becomes a YouTube sensation and attracts the attention of the school’s queen bee, Hailey Jo. Hailey Jo is from a VERY wealthy family, and expects everyone to do her bidding. Soon Mango finds herself forced to make tough choices about the kind of friend she wants to have . . . and, just as important, the kind of friend she wants to be.” —Provided by publisher

The Parker Inheritance by Varian Johnson

Twelve-year-old Candice Miller is spending the summer in Lambert, South Carolina, in the old house that belonged to her grandmother, who died after being dismissed as city manager for having the city tennis courts dug up looking for buried treasure—but when she finds the letter that sent her grandmother on the treasure hunt, she finds herself caught up in the mystery and, with the help of her new friend and fellow book-worm, Brandon, she sets out to find the inheritance, exonerate her grandmother, and expose an injustice once committed against an African American family in Lambert.

The Season of Styx Malone by Kekla Magoon

“Caleb Franklin and his big brother Bobby Gene have the whole summer for adventures in the woods behind their house in Sutton, Indiana. Caleb dreams of venturing beyond their ordinary small town, but his dad likes the family to stay close to home. Then Caleb and Bobby Gene meet new neighbor Styx Malone. Styx is sixteen and oozes cool. He’s been lots of different places. Styx promises Caleb and Bobby Gene that together, they can pull off the Great Escalator Trade—exchanging one small thing for something better until they achieve their wildest dream. But as the trades get bigger, the brothers soon find themselves in over their heads. It becomes clear that Styx has secrets—secrets so big they could ruin everything—and Caleb fears their whole plan might fall apart. In this madcap, heartwarming, one-thing-leads-to-another adventure, friendships are forged, loyalties are tested … and miracles just might be possible.” —Provided by publisher

As Brave As You by Jason Reynolds

“When two brothers decide to prove how brave they are, everything backfires—literally.” —Provided by publisher

“Ghost. Lu. Patina. Sunny. Four kids from wildly different backgrounds with personalities that are explosive when they clash. But they are also four kids chosen for an elite middle school track team—a team that could qualify them for the Junior Olympics if they can get their acts together. They all have a lot to lose, but they also have a lot to prove, not only to each other, but to themselves. Ghost has a crazy natural talent, but no formal training. If he can stay on track, literally and figuratively, he could be the best sprinter in the city. But Ghost has been running for the wrong reasons—it all starting with running away from his father, who, when Ghost was a very little boy, chased him and his mother through their apartment, then down the street, with a loaded gun, aiming to kill. Since then, Ghost has been the one causing problems—and running away from them—until he meets Coach, an ex-Olympic Medalist who blew his own shot at success by using drugs, and who is determined to keep other kids from blowing their shots at life.” —Provided by publisher

Seventeen-year-old Blade endeavors to resolve painful issues from his past and navigate the challenges of his former rockstar father’s addictions, scathing tabloid rumors, and a protected secret that threatens his own identity.

“When Suzette comes home to Los Angeles from her boarding school in New England, she isn’t sure if she’ll ever want to go back. L.A. is where her friends and family are (as well as her crush, Emil). And her stepbrother, Lionel, who has been diagnosed with bipolar disorder, needs her emotional support. But as she settles into her old life, Suzette finds herself falling for someone new…the same girl her brother is in love with. When Lionel’s disorder spirals out of control, Suzette is forced to confront her past mistakes and find a way to help her brother before he hurts himself–or worse.” —Provided by publisher

Long Way Down by Jason Reynolds

“An ode to Put the Damn Guns Down, this is National Book Award finalist and New York Times bestseller Jason Reynolds’s fiercely stunning novel that takes place in sixty potent seconds—the time it takes a kid to decide whether or not he’s going to murder the guy who killed his brother.” —Provided by publisher

“Justyce McAllister is top of his class at Braselton Prep, captain of the debate team, and set for an Ivy League school next year- but none of that matters to the police officer who just put him in handcuffs. He’s eventually released without charges (or an apology), but the incident rattles him. Despite leaving his rough neighborhood, he can’t seem to escape the scorn of his former peers or the attitude of his new classmates. The only exception: Sarah Jane, Justyce’s gorgeous -and white- debate partner he wishes he didn’t have a thing for. Justyce has studied the teachings of Dr. Martin Luther King Jr. But do they hold up now? He starts a journal to Dr. King to find out. Then Justyce goes driving with his best friend, Manny, windows rolled down, music turned up. Much to the fury of the white off-duty cop beside them. Words fly, Shots are fired. And Justyce and Manny are caught in the crosshairs In the media fallout, it’s Justyce who is under attack.” —Provided by publisher

The Hate U Give by Angie Thomas

“Sixteen-year-old Starr Carter moves between two worlds: the poor neighborhood where she lives and the fancy suburban prep school she attends. The uneasy balance between these worlds is shattered when Starr witnesses the fatal shooting of her childhood best friend Khalil at the hands of a police officer. Khalil was unarmed. Soon afterward, his death is a national headline. Some are calling him a thug, maybe even a drug dealer and a gangbanger. Protesters are taking to the streets in Khalil’s name. Some cops and the local drug lord try to intimidate Starr and her family. What everyone wants to know is: what really went down that night? And the only person alive who can answer that is Starr. But what Starr does or does not say could upend her community. It could also endanger her life.” —Provided by publisher

Piecing Me Together by Renee Watson

“Jade believes she must get out of her poor neighborhood if she’s ever going to succeed. Her mother tells her to take advantage of every opportunity that comes her way. And Jade has: every day she rides the bus away from her friends and to the private school where she feels like an outsider, but where she has plenty of opportunities. But some opportunities she doesn’t really welcome, like an invitation to join Women to Women, a mentorship program for “at-risk” girls. Just because her mentor is black and graduated from the same high school doesn’t mean she understands where Jade is coming from. She’s tired of being singled out as someone who needs help, someone people want to fix. Jade wants to speak, to create, to express her joys and sorrows, her pain and her hope. Maybe there are some things she could show other women about understanding the world and finding ways to be real, to make a difference.” —Provided by publisher

“Zuri Benitez has pride. Brooklyn pride, family pride, and pride in her Afro-Latino roots. But pride might not be enough to save her rapidly gentrifying neighborhood from becoming unrecognizable. When the wealthy Darcy family moves in across the street, Zuri wants nothing to do with their two teenage sons, even as her older sister, Janae, starts to fall for the charming Ainsley. She especially can’t stand the judgmental and arrogant Darius. Yet as Zuri and Darius are forced to find common ground, their initial dislike shifts into an unexpected understanding. But with four wild sisters pulling her in different directions, cute boy Warren vying for her attention, and college applications hovering on the horizon, Zuri fights to find her place in Bushwick’s changing landscape, or lose it all. In a timely update of Jane Austen’s Pride and Prejudice, critically acclaimed author Ibi Zoboi skillfully balances cultural identity, class, and gentrification against the heady magic of first love in her vibrant reimagining of this beloved classic.” —Provided by publisher