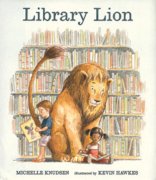 But Excuse Me That is My Book by Lauren Child

When Lola’s favorite book is not on the library’s shelf, her older brother, Charlie, tries to find another book she will enjoy.

Ishaq, the son of the chief translator to the Caliph of ancient Baghdad, travels the world in search of precious books and manuscripts and brings them back to the great library known as the House of Wisdom.

Sam, a shy but creative mouse who lives in a library, decides to write and illustrate his own stories which he places on the shelves with the other library books, but when children find the tales, they all want to meet the author.

A lion starts visiting the local library but runs into trouble as he tries to both obey the rules and help his librarian friend.

The Midnight Library by Kazuno Kohara

“Once there was a library that only opened at night. Step inside and meet the little librarian and her three assistant owls.” Provided by publisher.

Bats at the Library by Brian Lies

Bored with another normal, inky evening, bats discover an open library window and fly in to enjoy the photocopier, water fountain, and especially the books and stories found there.

Lola at the Library by Anna McQuinn; illustrated by Rosalind Beardshaw

“Lola loves Tuesdays. That’s when she and her mommy go to the library. Lola meets her friends there. They share books and don’t have to be quiet all the time. The nice librarian tells stories. There is a big machine that buzzes Lola’s books in and out, and she can take any books she wants home with her. Lola and her mommy always stop for a treat on the way home. No wonder Lola loves the library.” Provided by publisher.

While helping his family in their work as migrant laborers far from their home, Tomás finds an entire world to explore in the books at the local public library.

Examines the story of how librarian Ann Carroll Moore created the first children’s room at the New York Public Library.

Mr. Putter and Tabby Turn the Page by Cynthia Rylant

Mr. Putter and Mrs. Teaberry bring Tabby and Zeke to the library for a special storytime.

“In this middle grade novel-in-verse by the Newbery Medal-winning and Coretta Scott King Honor Award-winning author of The Crossover, soccer, family, love, and friendship, take center stage as twelve-year-old Nick learns the power of words as he wrestles with problems at home, stands up to a bully, and tries to impress the girl of his dreams.” Provided by publisher.

The Grimm Legacy by Polly Shulman

New York high school student Elizabeth gets an after-school job as a page at the “New-York Circulating Material Repository,” and when she gains coveted access to its Grimm Collection of magical objects, she and the other pages are drawn into a series of frightening adventures involving mythical creatures and stolen goods.

The Library Card by Jerry Spinelli

The lives of four young people in different circumstances are changed by their encounters with books.

Nothing ever changes inside the storybook kingdom inhabited by twelve-year-old Princess Sylvie, her parents, and many other characters until Sylvie discovers that by allying herself with the Reader she can experience new adventures beyond the confines of the book.

The Forbidden Library by Django Wexler

When her father is lost at sea shortly after meeting a very unusual visitor, Alice must leave her home to live with an “uncle” whose rural Pennsylvania estate includes a massive and mysterious library that holds much more than books.

The Book of Dead Days by Marcus Sedgwick

With the help of his servant and an orphan girl, a magician named Valerian searches graveyards, churches, and underground waterways for a book he hopes will save him from a pact he has made with evil.’

The Book Thief by Markus Zusak

Trying to make sense of the horrors of World War II, Death relates the story of Liesel—a young German girl whose book-stealing and story-telling talents help sustain her family and the Jewish man they are hiding, as well as their neighbors

Books contain countless tales but what if Book told its own story? From clay tablets to e-readers, here is a quirky, kid-friendly look at the book.

How a Book is Made by Aliki

Side by Side: Five Favorite Picture Book Teams Go to Work by Leonard S. Marcus

Describes the process by which several teams of authors and illustrators have created such picture books as “Louis the Fish,” “The Glorious Flight,” “The Stinky Cheese Man and Other Fairly Stupid Tales,” “Sam and the Tigers,” and “The Magic School Bus Explores the Senses.”

Ways of Telling: Conversations on the Art of the Picture Book by Leonard S. Marcus

A collection of interviews with fourteen artists and writers of picture books who, regardless of their country of origin, have had a major impact in the United States.

Richard Wright and the Library Card by William Miller; illustrated by Gregory Christie

Based on a scene from Wright’s autobiography, Black Boy, in which the seventeen-year-old African-American borrows a white man’s library card and devours every book as a ticket to freedom.