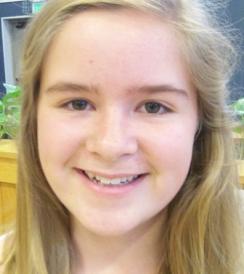 In the Spring of 2012, one of our Young Readers, Candace Huntington, was published in Stone Soup, a magazine of art and literature from children aged 8 to 13.  In the following interview, which took place in our beautiful Children’s Library, Huntington shares her views on poetry, children’s literature, and her visits to the Boston Athenæum.

Mountain: How did you go about writing the poem “Morphing into Monsters,” published in the April 2012 edition of Stone Soup?

Huntington: I wrote this poem at Overland, a camp at Williams College in the Berkshires.  They had different sessions and mine was writing.  They told us to write a poem about a game we like to play. I go to Martha’s Vineyard every summer, where my cousins and I play a game called Monster Tag.  That was the first thing that popped into my mind.

Mountain:  How has it felt to be a published poet?

Huntington: It’s been amazing.  I entered it last fall.  They sent me a letter saying I made it to the top 5% and then a couple months later they sent another letter saying they were going to publish it, which was great.  My friend always reads Stone Soup and she was really excited when she came across my poem.  My mom emailed my teachers and told them and they were pretty excited too.

Mountain: When did you begin writing?

Huntington: I started writing by myself.  I like to read, so I thought it would be fun.  My favorite book was The Westing Game.  When I was eight or so, my parents bought a book that had “Walking through the Woods on a Snowy Evening” in it.  I didn’t know it was famous when I found it in there.  I just thought it was really cool.  So it’s one of the poems that inspired me to start writing.  That and a book of silly poems by Shel Silverstein.

Mountain: What type of reading and writing do you like to do?

Huntington: I usually write poems, but I’ve started writing some short stories, usually realistic fiction, but I would like to try writing Science Fiction since I have been reading it a lot.  I loved The Hunger Games by Suzanne Collins.  One of my favorite books that I checked out of here recently was Unwind by Neal Shusterman.  It’s a dystopian novel where parents sign up troublesome kids to be “unwound”–have their bodies taken apart for transplants.   I’m really liking some of my summer reading for school too, like The King Must Die by Mary Renault, about Theseus and the Minotaur. When I was little, I read Jack Gantos’ Joey Pigza books.  He came in one day and I got to meet him.  I like how he told his own story.

Mountain: Do you write on the computer, by hand, both?

Huntington: I usually draft on the computer, but if I’m out and about, I usually have my journal with me– so I can write there and type it up later.  I collect journals.  My favorite one is from the Museum of Modern Art in New York.

Mountain: When did you first come to the Boston Athenæum?

Huntington: My family got a membership a few years ago.  I’ve done a lot of homework at this table.  I love how it is really quiet, so I can focus. And the air conditioning in the summer helps me focus too.  I come here to do homework or summer reading or to check out books.

Mountain: What languages do you speak?

Huntington: I took French for two years in middle school.  In High School, I’ll be taking Latin and and I’m really looking forward to it, along with my history classes on ancient Rome.  And I’m 1/8 Armenian, so I would like to learn that language someday.

Mountain: Have you been inspired in terms of a career yet, or is that still a long way off?

Huntington: Yes, I have.  I want to be a journalist– maybe even a photojournalist– of World News.  I just got my own camera, so I’ve been taking photos, mainly of nature on Martha’s Vineyard.