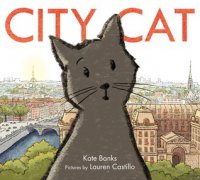 Michael and the Cats by Barbara Abercrombie, illus. by Mark Graham

On a visit to his aunt and uncle, Michael is delighted by their two cats but must learn the proper way to make friends with them.

An easy-to-read book about a globe-trotting cat that crosses paths with a vacationing family in the great cities of Europe. Includes facts about the cities.

When a gorilla who knows sign language tells his keepers that he is lonely, they bring him a very special friend.

Clever tales including Puss In Boots, The White Cat, and Sir Pussycat.

Important secrets about how best to live a cat’s life will be revealed only to those who can prove that they are genuine cats.

Ralph, a very, very, nasty cat, finally sees the error of his ways—or does he?

The Night World by Mordicai Gerstein

Sylvie the cat persuades her boy to go into the darkness very late at night, where they’re greeted by the shadows of roses and other flowers, and by nocturnal animals who whisper, “It’s almost here.”

Stack the Cats by Susie Ghahremani

Cats of all shapes and sizes scamper, yawn, and stretch across the pages of this playful counting book. And every now and then, some of them pile into the purrfect cat stack!

When Kitten mistakes the full moon for a bowl of milk, she ends up tired, wet, and hungry trying to reach it.

Dissatisfied with her life, Puff the cat leaves home and becomes a rich and glamorous model, but eventually returns having found out that it’s better to be who you are.

Pete The Cat: I Love My White Shoes by Eric Litwin, illus. by James Dean

As he walks down the street, Pete the cat sings about his brand new white shoes as they change from red to blue to brown to wet.

The Tale of Kitty-In-Boots by Beatrix Potter, illus. by Quentin Blake

A young black cat gets more of an adventure than she bargained for when she goes from predator to prey on a hunting trip. With appearances from Mrs. Tiggy-winkle and Peter Rabbit.

A Kitten Tale by Eric Rohmann

As four kittens who have never seen winter watch the seasons pass, three of them declare the reasons they will dislike snow when it arrives, while the fourth cannot wait to experience it for himself.

There Are Cats in This Book by Viviane Schwarz

The reader is invited to lift the flaps and follow the cats as they play with yarn, boxes, pillows, and fish.

When Ginger the cat gets fed up with dealing with her owner’s new kitten, it takes drastic measures to make the two of them friends.

They All Saw A Cat by Brendan Wenzel

In simple, rhythmic prose and stylized pictures, a cat walks through the world, and all the other creatures see and acknowledge the cat.

“Mr. Wuffles ignores all his cat toys but one, which turns out to be a spaceship piloted by small green aliens. When Mr. Wuffles plays rough with the little ship, the aliens must venture into the cat’s territory to make emergency repairs.”—Provided by publisher

The Daydreamer by Ian McEwan, illus. by Anthony Browne

An imaginative ten-year-old boy, who is best understood by his family, recounts some of the adventures he has while daydreaming.

A cat hears three stories about a dull rainy day, a yummy bug, and a good day of destruction in the house.

While Ballet Cat and Sparkles the Pony are trying to decide what to play, they each share an important secret.

The Underneath by Kathi Appelt

An old hound that has been chained up at his hateful owner’s run-down shack, and two kittens born underneath the house, endure separation, danger, and many other tribulations in their quest to be reunited and free.

The Cheshire Cheese Cat: A Dickens of a Tale by Carmen Agra Deedy

A community of mice and a cheese-loving cat form an unlikely alliance at London’s Cheshire Cheese, an inn where Charles Dickens finds inspiration and Queen Victoria makes an unexpected appearance.

The Cats of Tanglewood Forest by Charles de Lint

Twelve-year-old Lillian, an orphan who loves roaming the woods looking for fairies when her chores are done, is bitten by a deadly snake and saved through the magical forest creatures.

When a storm separates Stumpy the squirrel from her newborn babies, her animal friends come to the rescue.

Five episodes in the lives of Pufftail, father of many cats, his favorite daughter Tabitha the gray tabby, and the other cats of their neighborhood.

Whittington, a feline descendant of Dick Whittington’s famous cat of English folklore, appears at a rundown barnyard plagued by rats and restores harmony while telling his ancestor’s story.

The Incredible Journey by Sheila Burnford

A Siamese cat, an old bull terrier, and a young Labrador retriever travel together 250 miles through the Canadian wilderness to find their family.

Cats are Cats by Nancy Larrick, illus. by Ed Young

A collection of thirty-six poems about all kinds of cats, from old grumbling cats to proud cats who sit tall, by poets including Eve Merriam, Jane Yolen, John Ciardi, and T. S. Eliot.

The Amazing Maurice and His Educated Rodents by Terry Pratchett

A talking cat, intelligent rats, and a strange boy cooperate in a Pied Piper scam until they try to con the wrong town and are confronted by a deadly evil rat king.

Dogs and Cats by Steve Jenkins

Are you a cat lover? A dog person? Either way, this book is for you! Read about how your favorite companion came to be a pet and how its body works. Then, flip the book over and find out about the other kind.