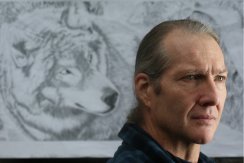 Considering himself a “political illustrator,” Christopher Bing’s career spans four picture books and countless political cartoons and illustrations showcased in such publications as The New York Times, The Wall Street Journal, and The Washington Post. Bing’s first published picture book, Ernest L. Thayer’s Casey At the Bat: A Ballad of the Republic Sung in the Year 1888,  earned him the coveted Caldecott Honor in 2001. Imbued in his illustrations of every one of his four picture books is a staggering amount of research—research often done at the Boston Athenæum. Even the casual reader will notice how this research translates into rich, intentional detail that deepens the reading experience. I had the great pleasure of speaking with Bing about his life and art.

Born in New Mexico, Bing spent his childhood as a “corporate brat,” moving from New Mexico to Florida to Alabama following his parents’ job opportunities. He finally landed in Lexington, Massachusetts, where he graduated high school. Of his regional association and upbringing, Bing remarks, “I have definitely been, yes, a child of America as opposed to of the South or of the North. Lived in Alabama, really lived in the middle of nowhere. And on a river. And basically grew up at that point, you know, had the life of Huck Finn…we were one of the last houses down a mile long dirt road, which was off another dirt road which connected up to a highway that was only a two lane highway, which then led into town, which was another ten miles out. As soon as I got off the school bus, I’d be running towards the Tennessee River and all my clothes off and jumping in and really having the life of Tom Sawyer and Huckleberry Finn in the woods. It was great.”

Bing’s career as a political and picture book illustrator might have been predicted by his early interests. “I cannot remember a time I haven’t drawn or been drawing. Aside from reading, I really enjoyed drawing.” He remembers the works that sparked his imagination including classics like Twenty Leagues Under the Sea by Jules Verne and comics like Alex Raymond’s Flash Gordon. These passions were supported by his parents, who’re “both academics and my father was the head of the math department at Newton South. My mother was a social studies teacher at Brookline High. They were both very much into books and academics.”

After graduating high school, Bing took time to focus on what his future might hold. “I had a year off and then went to the Rhode Island School of Design. I didn’t actually intend to apply in my year off! I guess the best way of putting it is that I’m a very high-functioning Asperger and classrooms just were not structured for me and I’m definitely on the visual end of the spectrum more than the calculating or mathematical end. One day this application came in the mail. I don’t know where it came from. And it was, ‘do a set of drawings’ and I did…so OK. Here’s a challenge. We sat down and did it, and that was in the fall. Then in the springtime my mother called up crying, ‘When did you apply to RISD?’ And I said that I didn’t know I had applied! ‘Well, we got your acceptance.’ Wow. Wonderful. OK. Because I’d never gone down to do an interview. I’d never filled out forms. And I know that my parents didn’t apply for me. So there’s this wonderful individual out there somewhere who actually did all of the applications and everything. I feel kind of bad because there was a fifty dollar application fee. Very generous person. But it wasn’t my parents. And nobody ever came forward.”

This anonymous, benevolent act set Bing on the path to his distinguished career as an illustrator. After a brief attempt to join the Marines to fly planes, specifically a Harrier Jet, Bing built a career of drawing cartoons and other images for numerous publications. He also concentrated on nurturing his growing family of three children, two daughters and a son.

A devoted father, Bing loved reading to his children as often as possible, especially a family favorite, the Harry Potter series. While reading the books to his kids, Bing took particular joy in bringing the characters to life through distinct voices. After seeing Harry Potter and the Sorcerer’s Stone with his eldest two children, they exclaimed how the screen’s Hagrid was not up to Bing’s rendition of the character. “I couldn’t believe that my voice had had that much of an impact. I mean, I’m a visualist, so to me, it’s visuals that really make the marking. Just a great moment for me.”

Bing brings his visualist lens to his picture book illustrations infusing each image with a depth of meaning and detail that comes from dedicated research. This research brought him to the Boston Athenæum, where various resources helped bring realism and nuance to his second published book, The Midnight Ride of Paul Revere by Henry Wadsworth Longfellow. “Doing the research for The Midnight Ride of Paul Revere, I was looking at very old books and seeing how they were designed, how they were laid out. And there is a difference. I get so focused on designing the book that actually having a historic reference for them…I love sinking into research. When I contract out a book it’s for a year. The work itself really doesn’t take that long. The work is really about five to six months of just sitting down and taking the photo reference, canceling out everything, thinking through everything, and then making sure the design and the color are placed properly.”

As Bing discovers new information, he weaves important historical context into his art. “When I did the research for The Midnight Ride of Paul Revere, there was a freed slave who fought the Battle of Lexington named Prince Estabrook. There is a daytime image in my book, which is a key battle scene. On the left hand side of the page, you’ll see Prince Estabrook, a Black Minuteman, fighting back. It’s those details. The funny thing is, the vast majority of people will skim over it. They won’t see it. There were stories I read to my kids over and over again because they would say that I’m onto something. And I always wanted my books to be so entertaining that a kid could glom onto it.

Bing’s imagination and love of research work together beautifully to help produce layered, meaningful images that compliment and deepen the words on the page. Bing subscribes to the theory of another beloved illustrator. “I definitely live by Maurice Sendak’s philosophy of doing picture books. He says the text tells one story, the pictures should tell another. There should be things in the pictures that are not in the text and things in the text that are not in the pictures. And when you put those two together, you have a complete third.”

Attention to historical accuracy translates into subtle creative details. “When you’re looking at Casey at the Bat, it looks like a scrapbook, 1888, all the memorabilia.” The realism of these illustrations have led to some amusing confusion. In his first published work, Ernest L. Thayer’s Casey At the Bat: A Ballad of the Republic Sung in the Year 1888, an ersatz library card included in each copy prompted “a couple of calls from librarians laughing, saying that ‘when we opened up the book, we were trying to pull the line because we thought it’d actually gotten stuck in there.’ And I was like, yes, I did my job.”

Furthermore, Bing’s research helps him add positive representations of marginalized communities. “With Casey at the Bat, I found out that 1888 was the last year that Black baseball players were allowed to play with white ballplayers. Because in 1889, what we would consider the professional baseball leagues stopped signing up Black ballplayers and wouldn’t renew their contracts. In 1888, there was what is called a pitcher/catcher battery. This team pitcher and catcher were Black and they were really amazing. So, my pitcher and catcher in Casey at the Bat are both Black.”

Bing’s commitment to inclusion extends to the projects he hopes to publish in the future. One such idea is a visual and allegorical representation of the Bill of Rights featuring figures drawn from real-life dancers of varying backgrounds. The goal of this project is to present this founding document “in such a way that it would make it accessible to everybody.” This is just one of many projects Bing hopes to take on in the future. Other ideas include a meticulously researched imagining of Charles Dickens’s beloved novella, A Christmas Carol, as well as breathing new life into the folklore of Darby O’Gill, and secular illustrations for the beloved poem “The Night Before Christmas.”

Christopher Bing aims to layer his illustrations so that readers discover something new each time the book is read. Every reading will uncover a different dimension and deepen your understanding of the images, text, and overall story. Next time you open up a picture book consider how the illustrator conveys meaning. Bing spends the time and thought to “put several layers into it so that it’s not just a picture book. I’ve always wanted depth in my books that would have people coming back, and back, and back. I want my books to come off the shelves.”