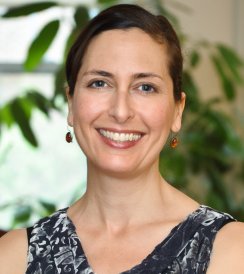 Daphne Kalotay was born in Long Branch, New Jersey to Canadian parents, Andrew Kalotay, a financial statistician, and Jill Kalotay, a dancer with a degree in teaching. When Daphne was three, her mother obtained a position teaching modern dance at Drew University, and the family moved to Madison. (Kalotay would go on to study dance though graduate school, with that art form continuing to permeate her writing later in life). She remembers a childhood full of books and poems—many written by Canadian authors, such as The Olden Days Coat and A Bird in the House by Margaret Laurence, Garbage Delight and Alligator Pie by Dennis Lee, and new editions of the Canadian Children’s Annual every Christmas. And despite the fact that it was located in a basement cluttered with piping, the library of her primary school was an enchanting place, presided over by the (seemingly ironically named) librarian, Mrs. Brightly. Kalotay loved to imagine that somewhere upon the highest shelf there might be a magical book that never ended. In the meantime, one could devour Encyclopedia Brown and Bobsy Twins novels and read and re-read Harriet the Spy, which introduced Kalotay to the novel concept that writing one’s observations down in a notebook might actually be considered a legitimate use of time.

Surprisingly, Kalotay is the first to admit that she was not the ideal student. English essays were something to finish in gym class. In her first days of high school, she was harshly graded by an English teacher who told her a parenthetical statement she had written was “too long” for parentheses—yet this supposed grammatical crime was something she’d seen in countless books considered classics. With her confidence in the system shaken, she turned to her friend (and now published author) Kirsten Menger-Anderson as a literary ally. To entertain each other on their walks home from school, they invented dramatic stories, which—like the magic novel sought in the elementary school library—seemed to have no end. They became so enamored with the activity that they even split the cost of a publishing guidebook. While it may have taken them fifteen years or so to make good on this investment, they are both in many ways back to their teen antics.

In 1988, Kalotay enrolled at Vassar College and became a psychology major. It was not until her final semester there that she took a creative writing class as an elective with Beverly Coyle. Everything changed. A lifetime of notebooks full of thoughts and stories were now seen as a professional resource. Coyle gave Kalotay a brochure for the New York State Summer Writers Institute in Saratoga Springs, where Kalotay attended courses with Amy Hempel and Marilyn Robinson and then spent the next year preparing to apply to graduate programs, finally settling upon Boston University’s M.F.A. in Creative Writing. But Kalotay did not stop there. A year of graduate reading only served to teach her that she still had much more to read, so she applied for a PhD program at BU and under Saul Bellow completed a dissertation on Mavis Gallant. And in her own words, a PhD program was a great opportunity “to read books for free”—a seemingly paradoxical comment coming from the woman who as a girl wrote her English essays in gym class—but a comment that might give hope to all of the budding authors out there who have ever been discouraged by an uninspiring teacher.

Calamity and Other Stories was published in 2005. They are tales of ordinary life in America and contain an awareness of both the absurdity and humor than can be found in the midst of tragedy, whether great or small—both of which Kalotay feels are conveyed by the word “calamity.” Soon after, she began work on Russian Winter (2010), which tells the story of a former Bolshoi ballerina’s life under Stalin and in her adopted city of Boston. Kalotay’s most recent work, Sight Reading (2013), follows the relationships of a group of musicians in Boston between 1987 and 2007, as an exploration of creativity and intuition, as well as the many varieties of love and friendship. Kalotay is currently working on a new novel set primarily in New York in the early 1990s.

Apart from writing novels on the fifth floor of the Boston Athenæum, Kalotay has been busy for several years now teaching creative writing part-time at Boston University and Grub Street. She is currently co-president of the Boston chapter of the Women’s National Book Association (which was founded in 1917 but now includes men in its ranks), whose mission she describes (much as the gold plaques on the first floor describe the mission of the BA to its members) as supporting women “in the community of the book,” whether as authors, editors, publishers, marketers, librarians or readers through events, internships, book clubs, charity work, annual teas and many other opportunities.

Kalotay joined the Boston Athenæum in 2005 when she began her research for Russian Winter. Here she was able to find Russian points of view on Stalinism as well as the observations of American and European travelers, for whom the goings-on behind the Iron Curtain were new and strange and excellent fodder for descriptive memoirs. A favorite was Postmarked Moscow by Lydia Kirk, a very opinionated, but observant, wife of an American ambassador to Russia.  The Reference Department and interlibrary loan sersvice were also able to help find obscure books on Russian gold marks and other material culture resources. Kalotay has remained a fifth floor reader and writer, as she likes the high ceilings and striking artwork and seeing familiar faces, because “writing can be quite the solitary profession.”  Russian Winter even includes a scene at the Athenæum. When asked by her editor why so many of the men in the scene were wearing bow ties, Kalotay explained that she would simply have to see the place for herself.