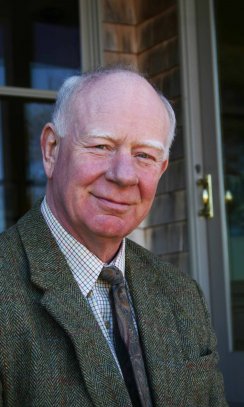 Retired from his careers in the computer industry and philanthropy, David Tory has spent the last few years researching the arrival of English colonists in New England. Exploration: The Stanfield Chronicles is the result of those years of research, following the fictional Isaac Stanfield through a life of adventure in the early seventeenth century. Originally from England, for 30 years David Tory has called Essex County, Massachusetts, his home with his wife, Helen. For more information, visit his website at www.davidtoryauthor.com.

Tell me about yourself.

DAVID TORY: I was born in England, in Sheffield, Yorkshire. I was educated in England, and I entered the computer business in 1962, as a programmer. I started a software company in 1971 which I sold to a Swiss company, and we moved to Geneva in 1979. Then that Swiss company merged with an American company, which meant I moved the family to Long Island in 1980. In 1988, I was asked to run a software company in Boston, so I moved the family up to the North Shore. I ran that company for seven years before retiring in 1995.

Q: How did you get involved in philanthropy?

DT: When our two girls went off to college, my wife decided to go to college too as a mature student. She went to Bradford College in North Essex County and met two friends there who were just graduating and wanted to start a nonprofit to bring art to young kids in Lawrence. My wife joined them. I got involved a year or so later in 1995 when I retired. I was also persuaded to start helping other small nonprofits, helping them organize their boards, teaching them the business practices they didn’t understand (like business plan, projections, budgets, etc.). That resulted in me starting a community foundation, the Essex County Community Foundation, in 1998, which I left in 2011.

Q: How did your work develop into a research project?

DT: I started writing a thesis about philanthropy in New England. I had the impression from talking to lots of friends and colleagues from different parts of the country in the philanthropic industry that New England has something of a reputation for being a challenging place in which to raise money. I thought that the Puritans might have had something to do with this. “I give of myself, not of my wealth.” So I started doing research, and in the course of it, I found that there was a great deal more to the Puritan story and their arrival in New England than I had been taught or was aware of. It was actually a much more complicated and enthralling story. In fact, there were some things I found that didn’t even match the common understanding of what and how it all happened. Based on the events and people I uncovered I thought, “there’s a great story here,” but I was torn between writing a history and telling a story that incorporated the history.

Q: And how did you make the choice between nonfiction and historical fiction?

DT: As a young boy I was introduced to the author G.A. Henty. Mr. Henty wrote at the latter part of the nineteenth century stories for boys about history, and each book of the fifty-odd he wrote was about a particular event or situation in history. In each case, the book was written from the perspective of a boy who was involved in that event. So for example, in a book about the American Civil War, he wrote about a 16 year old who joins the confederacy. I read all those books and they stuck with me. From that came my love of history. I first thought I would write a synopsis for a history course, but with Henty in mind and in talking to various people, family, obviously my wife Helen, and other friends, they said that it was really a story that needed to be told.

Q: So, given your research, what led you to The Stanfield Chronicles?

DT: Writing a work of historical fiction, in which the narrator can be an observer and participant, allowed me the freedom to imagine as well as to describe historical events and people from a particular perspective as it was happening. I also didn’t want truth to necessarily get in the way of a good story! So I had all the pieces, now how do I put them together? I created a character called Isaac Stanfield who has a friend in Dorchester, Will Whiteway, a real person born in 1597, who became an important man in Dorchester, England. More importantly, he also kept a diary. Isaac and Will were the same age, they went to school together and were lifelong friends. When Isaac Stanfield starts his adventures he writes a journal and sends the entries on a regular basis to Will for his safe-keeping and edification. The story starts in 1613, when Isaac is 16, with a fire that really happened in Dorchester. I have Isaac believing he is in some way responsible for starting it. The whole book starts at that moment. He leaves Dorchester hotfoot and goes down to Weymouth, where he gets put onto a boat, the Sweet Rose, as a cabin boy. The historical events and people reveal themselves. The political, commercial, and religious intrigue that led to the Mayflower leaving Plymouth England in 1620 is described by Isaac as it happens. Isaac has a love interest named Aby and finds himself being seduced by one or two other people along the way. It’s a coming of age story for Isaac as well.

Q: What was the most difficult part of that writing process?

DT: Stopping the research! The research was a wonderful journey. I had never gone to university, so the idea of doing academic research was foreign to me. In the computer industry, you didn’t have time to do research because new things were happening constantly. You didn’t have time to go back, and there wasn’t much to go back to. In doing some initial research, I started at a Manchester-by-the-Sea bookstore, Manchester By the Book. It’s a secondhand bookstore, and they have a section full of books—some very old—written about the early period of exploration in New England. I started buying these books and reading them and then using the bibliography of those books to find other authors, and so on. And then going on the internet and doing some really deep research, finding all of it so fascinating. It was a major problem for me to stop the research, despite the innumerable exciting rabbit holes I went down.  The historical context was there, and I produced a calendar and filled in everything I knew happened based on the historical record. Now what I needed to do is find out how Isaac fit into all this. Writing the historical bit was pretty straightforward. But when Isaac came into it, very quickly it reached a point where I would sit down at my computer, and I would say, “Okay, Isaac, here’s the situation, tell me what happened.” And we would just spontaneously respond to the situation. However, the other problem was how to get the book published. I was a total unknown as a writer so I couldn’t get a literary agent. And you can’t get it published by a traditional publisher unless you have a literary agent. So I had to go an alternative route in order to get the book printed.

Q: What did you enjoy most about the process?

DT: The process was really trying to curtail the research, which I found absolutely fascinating. I’m 79 years old, and I thought, “this is not the time to start a career in writing.” I was doing this because I wanted to tell the story, not necessarily to become a successful author. So I wasn’t constrained in my writing by worrying about whether the subject matter and genre were commercially viable. I wanted to make sure the book had literary merit, and I had lots of people assuring me that it had. People would ask who my reader was, “who are you selling this to?” I’m not selling it to anyone. I’m writing a story that pleases me. And if it pleases other people as well, great! What I found most exciting was not knowing the human interest side of Isaac and where he was going. I had no idea at the beginning of the book how he would end up, other than he had to end up at the end somehow or other involved with the Mayflower leaving for New England in 1620. The joy was people I knew reading the book and saying “I love it.” When I do presentations, I read from the book, and I find I’m so involved in it. I love the book, and get emotional reading certain parts, even though I’ve read it I don’t know how many times. So the joy is also in the fact that it’s alive. It’s part of me, I’m a part of it. And I look forward to the next one.

DT: I have a granddaughter, Rue, and she is a very interesting lady. She is very erudite, and she is a writer, an explorer of minds, and a philosopher. A quite extraordinary young lady. She became a member of the Athenæum several years ago. She’d come in on a regular basis and study and do her homework here or whatever else she was doing, and she loved it. So when I needed another source for information on specifics from the period in Boston, I asked her to introduce me to the Boston Athenæum. A few weeks ago, I came in with Rue. She introduced me and showed me around. I love it.

Q: What have you enjoyed the most during your time at the BA?

DT: I think it’s a wonderful area for contemplative research. There’s such a wealth of information here. But even if you’re not actually using the books, coming in and finding a corner somewhere and doing the research in this wonderful academic environment is absolutely a delight.

Q: In the future, what can we look forward to from you?

DT: Yes, Exploration is published, the first book in The Stanfield Chronicles trilogy, and the second book, Retribution, will not be published until next spring. Then I have the third book in the trilogy to write. The great thing now will be getting the audio version of Exploration out, which I will be narrating myself.