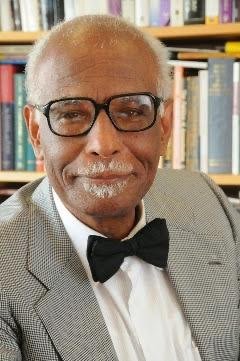 On the morning of the inauguration, as the country buzzed with anxiety and excitement, I had the privilege of spending a calm and contemplative hour with Dr. Winston Langley, a scholar of human rights and international organization, as well as a Trustee of the Boston Athenæum.

Dr. Langley is professor emeritus of political science and international relations at University of Massachusetts Boston and senior fellow at the McCormack Graduate School for Policy and Global Studies. We spent our time together discussing his work as an author and editor. Our conversation is edited for brevity and clarity.

Q: What is your academic background?

DR. WINSTON LANGLEY: I was born in the Caribbean and so I began with British tutelage in the Anglican schools there, as well as Cambridge, England. But all of my degrees were completed in the United States. I came here for the last years of my undergraduate degree in biology, thinking I was going to medical school. But I had been exposed to German language and history, so I went to graduate school and pursued a master’s degree in diplomatic history. Then I went into international relations. And then later on when I was teaching, I picked up a law degree.

Q: What is your favorite thing about the Athenæum?

WL: I’d say three or four things, actually. The name itself suggests something—it’s not just a library in the general sense. It speaks to something deeper. I think human beings, like non-human nature, hold within them great wisdom—wisdom that becomes evident through meditation and interaction with others. And I think that’s a sense in which I see the Athenæum as symbolically important. Its architecture is also part of that symbolism. I like how it provides for meditative inquiry. I like the possibility of fellowship there. I like its respect for the past which brought it into being. I know many parts of it have been shifted and shared with other institutions. That a group of private persons came together and recognized this importance is something which I enjoy, as well.

Q: What are the primary topics and themes you address in your writing and editing?

WL: Intellectually and otherwise, I am committed to the idea of human species identity. Some of the specific areas to which I direct my attention are: human rights; models of world order—we live, for example, in what I would call the Westphalian model, based in the nation-state system, but there are others and I try to make inquiry about them; I’m interested in international political economy; and international organization.

There’s one other, but it falls into the human rights agenda. I happen to like poetry. One of the persons on whom I reflect is the National Poet of Bangladesh, Kazi Nazrul Islam. I have a book on him and have been moving deeper and deeper into his thinking. I think of him as the greatest human rights poet of the twentieth century. He never finished high school, but beyond doubt he was a genius. There are some wonderful translations and they’re very accessible.

Q: You have published books as both author and editor. What are the unique challenges and benefits of working as an editor and how does that process differ from being an author?

WL: In a sense an author, of course, is responsible for the conception, development, the processes of work, its conclusion, the responsibility to see that what’s being said is defensible—factually and otherwise, that others can rely on it for purposes of use, that it hopefully compensates the reader for the time used to consume it, and that it serves a purpose for the larger society.

I think one who seeks to edit a work that comes from others would seek to establish whether some of those features are present in the work of the contributors. It’s not always easy to determine that and it creates a problem in many ways because people have different values and those must be dealt with.

There is also the notion of dealing with multiple purposes. There’s an edited work that was just published by a colleague and me. He is from Turkey. He brings a body of experiences to the work that would be missing for myself. I [co-edited] a book on women’s rights in the United States and part of the purpose of that work was to link developments in the US to the broader human rights movement in the world. And my co-editor was Vivian Fox. The dialogue between us was quite enriching and found its way into the book. If I had gone about it by myself, quite a bit would have been missing. Her skill was in history, I’m more of an international relations person and the legal background helped. So, all of those features are part of a broad contribution that a single author may not be able to make.

WL: Yes. The drawbacks can be rather difficult. Sometimes a co-editor or co-author comes with a certain world outlook that she or he seeks to maintain despite what might be the emerging evidence. That creates problems. But they can be overcome by deep dialogue which can elicit mutual trust. Works have to be put in context. That takes quite a bit of meditation itself. So, the dialogue allows for that. I earlier mentioned the work on the book on human rights in Turkey. In this case the colleague is not just from Turkey, but is from a minority in Turkey, the Kurds, and he had a particular point of view. We had no problems because we have broad agreement on the normative structure that was being used to measure human rights compliance. We also had a series of court decisions by the European Court of Human Rights, so we had authors of decisions outside of ourselves with which to deal and to measure ourselves.

Q: You mentioned in the acknowledgments for While America Sleeps that some research had been done at the Athenæum. What kind of materials did you consult, or was it a matter of meditating in the space, as you mentioned before?

WL: At the Athenæum, the area that I used were the newspapers. I was seeking to update myself on reactions from different areas of the world to [Greta Thunberg]. Some of that was found in the Athenæum. I’ve yet to delve into some areas of the deep archives, but I’m moving in that direction.

Q: Since publishing While America Sleeps, have you seen evidence of the United States making any gains in the areas you cite in the book as problems?

WL: No. And I’ll say why. No, the first area, for example, deals with disarmament. Matters became worse under the outgoing president, Trump. The second area deals with international political economy and none of the changes that would be helpful to the US has come into being. The third focus is on ways in which race became the basis of identity in our country, in part to prevent the coming into being of social class, and some of the likely consequences that result from that historical cleavage. It has been made worse in many senses. The fourth deals with popular culture and education. As to the intellectual and moral development of individuals, certainly nothing has been done. The fifth is the environment. There seems to be some promise that the incoming administration may do some things. We’ll see. The sixth deals with world power and the seventh focuses on collective security. And nothing has been done, in either of these areas, to improve matters for the US or the world. Hopefully [the book will be] republished in February with the title While the US Sleeps, largely to correct some embarrassing spelling and other non-factual errors.

Q: Do you think the proposed solutions are still feasible?

WL: Yes. I’ll take, as an example, the environment. It is insufficient to address the global environment without seeking to elicit the collective response of the world. Secondly, the difficulty is a long term one. Because we are so far advanced in the destruction of the environment, any slip up in the efforts to correct the problem is only going to aggravate it. A massive curricular reordering in which non-human nature is seen differently by the public [is necessary], anything less is going to be damaging.

Nature is our first university, it is that which instructs us in every area. It is also our primary library, our Athenæum. It is our first hospital. It is our first wheat basket. If nature were suggested in this way, we’d see how indispensable it is to everything we do and the seriousness with which we ought to [treat it]. And that all living beings are communicating with us, as we are with them, in ways and languages that we don’t immediately know.

Q: Do you have any forthcoming projects that you can tell us about?

WL: I just finished a manuscript on The War Between the US and China. It may not be seen as hopeful, but it’s a rebuttable of Professor Graham Allison’s work, Destined for War. I’m suggesting that it’s not inevitable and that the reasons for his predictions of this suggested war are miscast. And there’s a [project] on moral courage that I’m working on with Kazi Nazrul Islam’s poetry in mind. He has a play entitled Truthfulness, on which I’m basing this work.