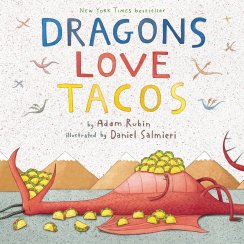 Add a little magic to your April with these dragon and unicorn books.

Dragons Love Tacos by Adam Rubin
(Picture Book Basket RUBIN)
This zany book tells you all you need to know to throw a taco party for dragons. Just don’t give them hot sauce, or else… well you’ll see.

The Paper Kingdom by Helena Ku Rhee illustrated by Pascal Campion.
(Picture Book Basket RHEE)
Daniel needs to go to work with his parents as they work overnight as office cleaners. To keep Daniel entertained, his mom and dad begin to tell him of the magnificent kingdom of paper they work in. Soon the office turns into a kingdom full of dragons and kings. Magical illustrations bring the tale to life.

Unicorn Thinks He’s Pretty Great by Bob Shea
(Picture Book Basket SHEA)
Goat thought he was pretty cool until Unicorn came to town. Unicorn can fly and make it rain cupcakes! How could Goat ever compare to that? Turns out he doesn’t have to because they are both pretty cool in their own ways. Envy turns to admiration and finally to friendship for Goat and Unicorn.

The Yin-Yang Sisters and the Dragon Frightful by Nancy Tupper Ling ; illustrated by Andrea Offerman.
(+ PZ7.L66135 Yin 2018)
This empowering story of two sisters demonstrates that we should value our differences. When a fearsome dragon takes over their village bridge, twin sisters Mei and Wei have opposing views of how to fix the problem. Wei wants nothing more than to confront that stinky old dragon head on, but Mei favors a more thoughtful approach. With Wei’s confidence and gumption plus Mei’s creativity and diligence, it’s only a matter of time before everyone can be happy again.

The Tea Dragon Society by Katie O’Neill.
(Lg PZ7 .O5527 Te 2017)
Adorable illustrations bring this graphic novel of magical dragons to life. Meet a delightfully diverse cast of characters while you pour over O’Neill’s illustrations and learn about the mystical tea dragons.

Dragons in a Bag by Zetta Elliott ; illustrations by Geneva B.
(PZ7 .E46959 Dr 2018)
In Brooklyn, nine-year-old Jax joins Ma, a curmudgeonly witch who lives in his building, on a quest to deliver three baby dragons to a magical world. Along the way Jax learns more about dragons and himself.

How to Train your Dragon by Cressida Cowell.
(PZ7 .C8356 Ho 2010)
You may know Hiccup from the movies based upon this series. This series follows the adventures and misadventures of Hiccup Horrendous Haddock the Third as he tries to pass the important initiation test of his Viking clan, the Tribe of the Hairy Hooligans, by catching and training a dragon.

The Basque Dragon by Adam Gidwitz & Jesse Casey ; illustrated by Hatem Aly
(PZ7 .G345 Ba 2018)
Part of the series Unicorn Rescue Society, this book follows the group on a trip to the Basque country where they have to save a dragon from the billionaire Schmoke Brothers. Will they be able to rescue the magical creature from greed?

Where the Mountain Meets the Moon by Grace Lin
(PZ7.L65775 Wh 2009)
Minli’s father always tells her tales of mythical creatures and magic. Minli decides to chase after one of these tales to bring her family better fortune then their poor village has to offer. She buys a magical goldfish, and then joins a dragon who cannot fly on a quest to find the Old Man of the Moon in hopes of bringing life to Fruitless Mountain and freshness to Jade River.

The Dragonet Prophecy by Tui T. Sutherland.
(PZ7.S9669 Dr 2012)
Looking for your next favorite series? Look no further than the Wings of Fire books! Packed with action and adventure, you’ll find yourself lost in the rich fantasy world Sutherland has created. Look for the graphic novelization as well!

The Girl Who Drank the Moon by Kelly Barnhill.
(PZ7.B26 Gi 2016)
This epic tale will be hard for any middle grade fantasy reader to put down. Every year, the people of the Protectorate leave a baby as an offering to the witch who lives in the forest. They hope this sacrifice will keep her from terrorizing their town. But the witch in the forest, Xan, is kind and gentle. She shares her home with a wise Swamp Monster and a Perfectly Tiny Dragon. Xan rescues the abandoned children and delivers them to welcoming families on the other side of the forest. One year, Xan accidentally feeds a baby moonlight instead of starlight, filling the ordinary child with extraordinary magic. Xan decides she must raise this enmagicked girl, whom she calls Luna, as her own. When Luna approaches her thirteenth birthday, her magic begins to emerge on schedule–but Xan is far away. Will Luna be able to harness her newfound powers on her own? And what will happen when danger comes to the forest?

Dragons and Marshmallows by Asia Citro with pictures by Marion Lindsay.
(PZ7.C5452 Dr 2017)
This early chapter book series is sure to delight! A girl, Zoey, and her cat, Sassafras, use science experiments to help a dragon with a problem. Keep reading the series to see how Zoey helps other magical creatures.

A Creature of Moonlight by Rebecca Hahn.
(PZ7.H12563 Cre 2014)
Marni, a young flower seller who has been living in exile, must choose between claiming her birthright as princess of a realm whose king wants her dead, and a life with the father she has never known–a wild dragon. This coming of age story about defining your own identity is sure to be a page turner.

Seraphina by Rachel Hartman.
(PZ7.H2645 Se 2012)
Seraphina is a talented musician for the court of Goredd, a kingdom where dragons and humans coexist. On the surface, the kingdom is peaceful, but secrets and scandals lurk under the surface. When Crown Prince Rufus is found dead, everyone suspects dragons. Seraphina is caught up in the investigation with a very important secret of her own to protect.

Carry On by Rainbow Rowell
PZ7.R79613 Car 2015
If you are a fan of the enemies-to-lovers trope, you should give this fantasy a try. Born out of a fictional story in Rowell’s Fangirl, this book follows Simon Snow, the worst “Chosen One” ever to be chosen. He is constantly miss-casting spells and wreaking havoc on the Watford School of Magicks. His roommate Baz, an evil, sardonic vampire, would love to see the disaster that Simon’s last year at school is turning out to be, but he hasn’t shown up yet.