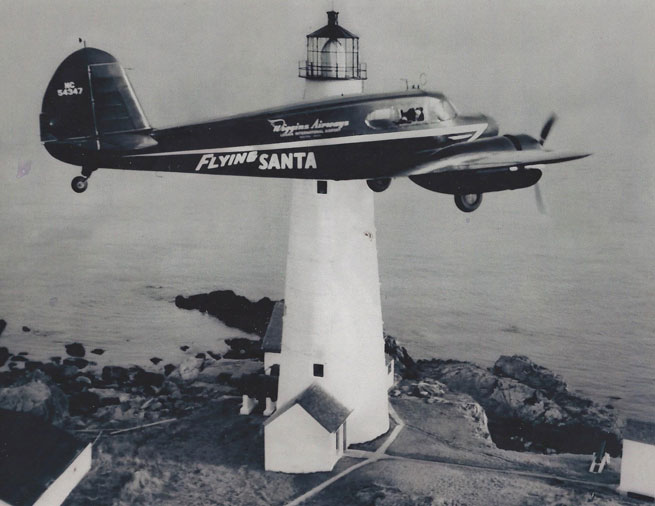 Edward Rowe Snow is best remembered as a New England maritime historian and a Flying Santa. A proprietor of the Boston Athenæum and Massachusetts native, Snow was born in 1902. He graduated high school at the age of 16 and for the next decade traveled the world working on oil tankers, sailing ships, and also as a Hollywood extra. He entered Harvard in 1929, graduated in three years by attending summer sessions in 1932, the year he married Anna-Myrle Haegg. He was a history high school teacher in Winthrop but left to write and lecture full time. He wrote for the Patriot Ledger in Quincy from 1957 until 1982, lectured, and made several radio and TV interviews (some of which can be found on YouTube). During the war, Snow was a member of the US Air Force, Twelfth Bomber Command. He was wounded in 1942 over North Africa and discharged in 1943 because of those wounds.

A descendant of sea captains and an avid explorer, Snow found shipwrecks, coins, and other artifacts on his boating trips around Boston Harbor. He defined island as “a body of land surrounded by adventure” in Secrets of the North Atlantic Islands and worked hard to preserve Massachusetts’s islands. An example is Georges Island: when Logan Airport wanted to extend on runway that would harm Fort Warren, Snow fought to save it and it is now in the state’s park system.

During his brief tenure teaching, one of his students got him involved with his father, Captain William Wincapaw, who had started dropping Christmas gifts to remote islands in 1929. In 1936 Snow joined him. Snow was the perfect choice of volunteer because of his hobby taking aerial photos of lighthouses. Snow delivered presents and goods (donated by sponsors and himself alike) up and down the New England coast, even expanding the flights to lighthouses on the Great Lakes and Bermuda Islands. In 1947, he visited 176 lighthouses. Beside a brief hiatus during the war, Snow would not give up the Santa suit until 1981.

While at the Athenæum, Snow researched and wrote many books on maritime New England history, including subjects such as the islands of Boston Harbor and surrounding sea, lighthouses, shipwrecks, nautical figures, sailing, forts, and sea tales. He also wrote about pirates and their treasures, stories about ghosts, and folktales about New England. He told the Boston Globe, “What I really like to do is to find a story so improbable that no one will believe it, and then prove beyond a doubt that it is true. I do think that folklore is important and that it should be preserved.” Thirty of his books are at the Athenæum. On the open shelf are The Romance of Boston Bay (1944), Women of the Sea (1962), True Tales of Pirates and Their Gold (1953), Great Sea Rescues and Tales of Survival (1958), and Boston Bay Mysteries and Other Tales (1977). His first published work, Castle Island, Its 300 Years of History and Romance (1935), is held in Special Collections and can be viewed by appointment.

In researching his second book, The Island of Boston Harbor: Their History and Romance 1626–​1935 (1935), based on his college thesis, he used and referenced many of the Athenæum’s resources. Some of these included A History of East Boston by William Sumner, The History of New England from 1630 to 1649 by John Winthrop, First Governour of the Colony of the Massachusetts Bay, A Topographical and Historical Description of Boston by Nathaniel B. Shurtleff, A Valedictory Poem by Frederick W.A.S. Brown, Prison Life by John M. Brewer, Notes on the Sea-Shore by James Lloyd Homer, The Pirates of the New England Coast, 1630–1730 by George Francis Dow, and Recollections of Alexander H. Stephens. He probably also took advantage of the Athenæum’s periodical collection; he references articles from The Bostonian, Boston Post, and the Boston Globe in this book as well.

Snow passed away on April 10, 1982 at the age of 79. He was buried near the sea he loved. There is also a children’s book in our collection based on Snow’s Christmas flights.Selected Works

Tague, Brian. “The Origins and History of the Flying Santa.” Friends of Flying Santa. 2016. http://www.flyingsanta.com/HistoryOrigins.html