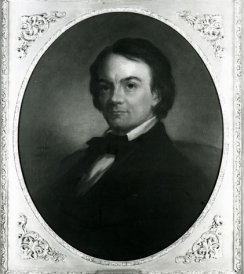 Books, – lighthouses erected in the great sea of time, – books, the precious depositories of the thoughts and creations of genius, – books, by whose sorcery times past become time present, and the whole pageantry of the world’s history moves in solemn procession before our eyes.”  -E.P. Whipple in Lectures on Subjects Connected with Literature and Life (1850).

In mid nineteenth-century Boston, essayist Edwin Percy Whipple was hailed as the most discerning literary critic of his generation, lauded for his humor, eloquence, and piercing intellect.  By 1908, thirty years after his death, the Boston Daily Globe was describing Whipple as “a great Boston critic and scarcely recalled essayist”, and little has occurred in the intervening century to revitalize the renown he once enjoyed.  A critic’s fame seldom outlasts that of his subjects, and so it is altogether predictable that E.P. Whipple has been forgotten, even as his friends and peers Oliver Wendell Holmes and Nathaniel Hawthorne have become household names.  Whipple was a proprietor of the Boston Athenaeum from 1855 until his death, and  portrait of Whipple can be viewed on the stair landing between the fourth and fifth floors, where many visitors to the library have undoubtedly paused and wondered as they catch their breath, ‘just who was E.P Whipple?’

Edwin Percy Whipple was born in Gloucester, Massachusetts to Matthew and Lydia (Gardiner) Whipple.  After Matthew Whipple died of cholera when Edwin was still an infant, Lydia and her four sons moved to Salem, Massachusetts.  Demonstrating a bookish disposition at an early age, Whipple whetted his appreciation for literature and history with frequent visits to the Salem Athenaeum.  When Edwin Whipple graduated from the local high school at age fifteen his work had already been published in a Salem newspaper.  He took a job as a clerk in a local bank, moving to Boston in 1837.  In Boston Whipple found an outlet for his literary talents in the debates and lectures of the Mercantile Library Association, where he co-founded the Attic Nights Club, a small group which met weekly to discuss and debate contemporary literature.

Starting in 1843 with an essay on Macaulay in the Boston Miscellany, Whipple’s critical essays appeared regularly, though often anonymously, in publications such as Harper’s Magazine and American Review.  In 1845 Whipple left the brokerage office at which he had been employed since moving to Boston and accepted a position as supervisor of the news office of the Merchant’s Exchange Building.

In 1847 Whipple married Charlotte B. Hastings, whose acquaintance with Oliver Wendell Holmes helped establish the couple’s residence at 11 Pinckney Street as a literary salon where Longfellow, Whittier, Emerson, and others gathered to discuss literature.

In 1848 Whipple published a compilation of his work under the title Essays and Reviews.  The subjects included English and American writers of the nineteenth century, as well as contemporary authors.  Essays and Reviews sold well enough to be reprinted continually for the next forty years and did much to establish Whipple as the preeminent literary critic of the day.

It was through the success of his lectures, however, that Whipple gained renown as a public intellectual.  Small of stature, myopic, and shy, Whipple was nonetheless a compelling public speaker, known for his satirical wit and modest disposition.  Traveling the country at the height of the lyceum movement, Whipple delivered as many as one thousand public lectures, drawing large audiences from Bangor to St. Louis.  Whipple subsequently edited and compiled his lectures, published as Lectures on Subjects Connected with Literature and Life (1849) and Character and Characteristic Men (1866).

Appointed literary editor the Boston Daily Globe in 1872, Whipple continued to publish reviews and literary essays, predicting great things for up-and-comers Henry James and Mark Twain.  Whipple died in 1886, his health having suffered a long and gradual decline in the preceding years.  He was survived by his wife and a son, Edwin Augustus Whipple.  His six-volume Works were published in 1885-1887.  Recollections of Eminent Men, with Other Papers, which included previously published tributes to Louis Agassiz, Rufus Choate, Charles Sumner and others, was published in 1887.  Edwin and Charlotte Hastings Whipple are interred in a family plot in Mount Auburn Cemetery.