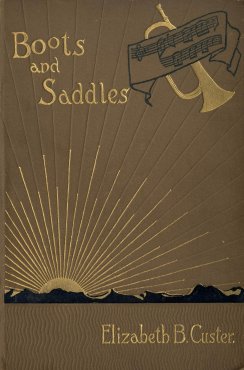 All Americans know the story of Custer’s Last Stand. What they may not know is that this is in part due to efforts by Custer’s wife to exonerate and immortalize him as an American hero. As they say, behind every great man is a great woman.

Elizabeth Bacon Custer was born in Monroe, Michigan in 1842. She faced tragedy early on, losing three siblings before age eight and her mother at 12. But “Libbie” had an adaptable and resilient nature, which would prove advantageous while marching with her husband’s troops years later. After her mother died, Elizabeth moved to Grand Rapids to live with her aunt. She returned to Monroe to attend boarding school at the Young Ladies’ Seminary and Collegiate Institute, and continued her schooling at the Young Ladies’ Institute in Auburn, New York, graduating valedictorian.

While other recent graduates of the Young Ladies’ Institute may have been considering potential suitors, Libbie was an independent spirit and not particularly inclined to marry: “If no one ever comes that I love then I shall be a ‘spinster,’ but to be one from necessity and one from pleasure are different things.” Even after the young George Custer made his interest in her quite clear, she did little to encourage him and felt he was too persistent. Romance soon developed, however, and they married in 1864.

With the Civil War still ongoing, the early stages of their marriage saw them frequently apart. When Custer was away, Elizabeth devoted her time to singing his praises to military officers, senators, and President Lincoln himself, but found accommodations near his campsites when she could. George Custer “found it hard,” he wrote his sister Lydia Ann, to keep her away from camp, for “she likes the army as well as I do.” He soon asked Libbie to join him at camp and found her equal to roughing it with army soldiers.

Sensing that the men resented her presence and determined not to show weakness on these long marches, Elizabeth adhered to the same grueling standards as the men. She even elected to live in a tent when proper housing was offered to her. She considered this time a learning experience, and took the opportunity to improve her riding skills. George Custer wrote to her father: “She thinks nothing of mounting upon a girthless saddle upon a strange horse and setting off at such a gait that even some of the staff officers are left behind.” This was a remarkable achievement since she rode sidesaddle. In fact, she was the only army wife to accompany the cavalry. Libbie delighted in the adventure the army provided; upon seeing a former suitor, she remarked, “What a humdrum life I had escaped by not marrying him…”

The adventures they shared together ended all too soon, however. News of Custer’s death arrived in June of 1876, but Elizabeth refused to fall victim to her grief. Despite coping not only with the loss of her husband but with accusations that he disobeyed direct orders, she knew she “had to live—a hero’s widow—to the end of my appointed time, worthily.” She spent the time immediately following Custer’s death by volunteering at the hospital and tending to the wounded. Adding to her burden, she soon became the sole caretaker of her poor and elderly in-laws. At the same time, payment on the property she had owned with Custer was due, along with an $8,500 loan. Perhaps as a testament to the kindness and charity Libbie was known for, fellow veterans chipped in to alleviate her financial strain, as well as that of other army wives.

In 1877, determined to move past her grief and start a new life for herself, Elizabeth set off for New York City, where she found a position as a secretary for the Society of Decorative Arts. Two years later, plans were being made to commission a statue of Custer that would stand at West Point. At no point in the planning stages was she consulted. She was dismayed that the widow of a war hero should be ignored, and found fault with a statue that bore little resemblance to the Autie she knew. She did not attend the unveiling ceremony. Her message was received loud and clear by all in attendance. In 1884, she succeeded in having the statue permanently removed. Shortly after, she finally began work on her own memorial to the General, her book Boots and Saddles. As in life, Elizabeth continued to defend her husband’s actions even after his death; the book answered Custer’s detractors who blamed him for the events at Little Bighorn.

Although some critics argued the book was more hero-worshipping than factual, most found the book entertaining and admired Elizabeth’s spirit and devotion to her husband. For her, more important than the reviews were the letters she received from other army wives and widows. Her book “made my country feel that I belong to them.” Her second book, Tenting On the Plains, also contained glowing descriptions of Custer’s deeds and received similar praise. Elizabeth’s final book was published in 1890. The narrative focused on Custer’s encounters with the Indians of the West prior to the fatal battle of Little Bighorn. Her biographer Shirley Leckie describes Elizabeth’s treatment of the Indians in Following the Guidon as heavily prejudiced: “Elizabeth presented Indian women as beasts of burden, exploited by their husbands. By contrast officers were romantic, chivalrous, and affectionate…” The Custers’ former black servant Eliza also featured in the story, depicted as having become more civilized and appreciative since working for the family.

All the publicity Libbie received from writing about life with her famous husband afforded her the opportunity to take her stories on the road. She began a lecture circuit in Concord, Massachusetts the same year her final book was published. She often faced unsympathetic audiences (like those in Cambridge), but regularly won them over with her good humor and charm.

Elizabeth’s sense of adventure and devotion to her husband never waned in the 57 years after his death. She continued writing articles and stories about Custer’s life and traveled to such far-off places as Switzerland, Japan, Germany, India, Egypt, France, China, and Russia. Libbie died in 1933 just before her ninety-first birthday.

Her problematic idealization of her husband and their life together aside, Elizabeth showed the country that women could hold their own, and that their support was valuable to the war effort. In the words of an unnamed contemporary of Custer, “…I am satisfied she was the best General of the two.”

Leckie, Shirley A. Elizabeth Bacon Custer and the Making of a Myth. Norman: University of Oklahoma Press, 1993.