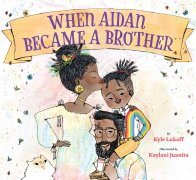 B is for Baby by Atinuke; illustrated by Angela Brooksbank

“B is for Baby. B is for Brother. B is for going to see Baba! One morning after breakfast, Baby’s big brother is getting ready to take the basket of bananas all the way to Baba’s bungalow in the next village. He’ll have to go along the bumpy road, past the baobab trees, birds, and butterflies, and all the way over the bridge. But what he doesn’t realize is that his very cute, very curious baby sibling has stowed away on his bicycle.” —Provided by publisher

All Around Us by Xelena Gonzalez; illustrated by Adriana M. Garcia

Finding circles everywhere, a grandfather and his granddaughter meditate on the cycles of life and nature.

When Aidan Became a Big Brother by Kyle Lukoff; illustrated by Kaylani Juanita

Aidan, a transgender boy, experiences complicated emotions as he and his parents prepare for the arrival of a new baby.

“When a teacher asks the children in her class to think about what makes their families special, the answers are all different in many ways —but the same in the one way that matters most of all. One child is worried that her family is just too different to explain, but listens as her classmates talk about what makes their families special. One is raised by a grandmother, and another has two dads. One is full of stepsiblings, and another has a new baby.” —Provided by publisher

Benji, The Bad Day, and Me by Sally J. Pla; illustrated by Ken Min

Sammy is having a very bad day at school and at home until his autistic brother, Benji, finds a way to make him feel better.

Kevin and His Dad by Irene Smalls; illustrated by Michael Hays

Kevin feels excitement, pride, pleasure, and love as he spends an entire day working and playing with his father.

A young Muslim girl puts on a head scarf and not only feels closer to her mother, she also imagines herself as a queen, the sun, a superhero, and more.

Three babies are caught up in the air and given loving attention by a father, grandmother, and mother.

When Mama’s pregnancy draws attention away from Gia, she worries that the special bond they share will disappear forever once the baby is born.

“Ralph takes a swing through his family tree to find out why he’s so rotten.” —Provided by publisher

Charlie and Mouse are getting ready for Mom’s birthday and things are not going exactly as planned… but with plenty of humor and imagination, they’ll prove that sometimes

Anna Hibiscus, who lives in Africa with her whole family, loves to splash in the sea and have parties for her aunties, but Anna would love to see snow.

In a small town in northern India, three siblings await their father’s youngest brother, Younguncle, who is said to be somewhat eccentric.

“A half-Chinese, half-Caucasian girl’s ‘memoir’ about a new sibling, being biracial, and her path to literary greatness.” —Provided by publisher

“Seventh grader Estefania ‘Stef’ Soto is itching to shake off the onion-and-cilantro embrace of Tia Perla, her family’s taco truck. She wants nothing more than for her dad to get a normal job and for Tia Perla to be put out to pasture. It’s no fun being known as the ‘Taco Queen’ at school. But just when it looks like Stef is going to get exactly what she wants, and her family’s livelihood is threatened, she will have to become the truck’s unlikely champion. In this fun and multicultural middle grade novel, Stef will discover what matters the most, and ultimately embrace an identity that even includes old Tia Perla.” —Provided by publisher

“Priyanka Das has so many unanswered questions: Why did her mother abandon her home in India years ago? What was it like there? And most importantly, who is her father, and why did her mom leave him behind? But Pri’s mom avoids these questions—the topic of India is permanently closed. For Pri, her mother’s homeland can only exist in her imagination. That is, until she find a mysterious pashmina tucked away in a forgotten suitcase. When she wraps herself in it, she is transported to a place more vivid and colorful than any guidebook or Bollywood film. But is this the real India? And what is that shadow lurking in the background? To learn the truth, Pri must travel farther than she’s ever dared and find the family she never knew.” —Provided by publisher

Sisters by Raina Telgemeier; with color by Braden Lamb

“Three weeks. Two sisters. One car. A true story. Raina can’t wait to be a big sister. But once Amara is born, things aren’t quite how she expected them to be. Amara is cute, but she’s also a cranky, grouchy baby, and mostly prefers to play by herself. Their relationship doesn’t improve much over the years. But when a baby brother enters the picture, and later, when something doesn’t seem right between their parents, they realize they must figure out how to get along. They are sisters, after all.” —Provided by publisher

Seventeen-year-old Blade endeavors to resolve painful issues from his past and navigate the challenges of his former rockstar father’s addictions, scathing tabloid rumors, and a protected secret that threatens his own identity.

Before We Were Free by Julia Alvarez

In the early 1960s in the Dominican Republic, twelve-year-old Anita learns that her family is involved in the underground movement to end the bloody rule of the dictator, General Trujillo.

I Am Not Your Perfect Mexican Daughter by Erika L. Sánchez

“Perfect Mexican daughters do not go away to college. And they do not move out of their parents’ house after high school graduation. Perfect Mexican daughters never abandon their family. But Julia is not your perfect Mexican daughter. That was Olga’s role. Then a tragic accident on the busiest street in Chicago leaves Olga dead and Julia left behind to reassemble the shattered pieces of her family. And no one seems to acknowledge that Julia is broken, too. Instead, her mother seems to channel her grief into pointing out every possible way Julia has failed. But it’s not long before Julia discovers that Olga might not have been as perfect as everyone thought.” —Provided by publisher

“Zuri Benitez has pride. Brooklyn pride, family pride, and pride in her Afro-Latino roots. But pride might not be enough to save her rapidly gentrifying neighborhood from becoming unrecognizable. When the wealthy Darcy family moves in across the street, Zuri wants nothing to do with their two teenage sons, even as her older sister, Janae, starts to fall for the charming Ainsley. She especially can’t stand the judgmental and arrogant Darius. Yet as Zuri and Darius are forced to find common ground, their initial dislike shifts into an unexpected understanding. But with four wild sisters pulling her in different directions, cute boy Warren vying for her attention, and college applications hovering on the horizon, Zuri fights to find her place in Bushwick’s changing landscape, or lose it all. In a timely update of Jane Austen’s Pride and Prejudice, critically acclaimed author Ibi Zoboi skillfully balances cultural identity, class, and gentrification against the heady magic of first love in her vibrant reimagining of this beloved classic.” —Provided by publisher

The House Baba Built: An Artist’s Childhood in China by Ed Young, text as told to Libby Koponen

“In Ed Young’s childhood home in Shanghai, all was not as it seemed: a rocking chair became a horse; a roof became a roller rink; an empty swimming pool became a place for riding scooters and bikes. The house his father built transformed as needed into a place to play hide-and-seek, to eat bamboo shoots, and to be safe. For outside the home’s walls, China was at war. Soon the house held not only Ed and his four siblings but also friends, relatives, and even strangers who became family. The war grew closer, and Ed watched as planes flew overhead and friends joined the Chinese air force. But through it all, Ed’s childhood remained full of joy and imagination.” —Provided by publisher.

The African American Family Album by Dorothy and Thomas Hoobler

“Vintage photographs and first-person accounts illustrate a comprehensive summary of the black experience, from roots reaching back hundreds of thousands of years, to the more recent history of African Americans.” —Provided by publisher

“Children can see how Carmen Lomas Garza captured the simple pleasure of a family eating watermelon on the front porch; how Kikugawa Eizan used curved lines to show the gracefulness with which a mother carries her young son; how John Singer Sargent depicted the flowerlike delicacy of two sisters as they light lanterns in a twilit summer garden; and how Winslow Homer showed a boy’s protectiveness of his younger brother in a dangerous situation. “How Artists See” is a series of interactive, inquiry-based books designed to teach children about the world by looking at art and about art by looking at the world.” —Provided by publisher