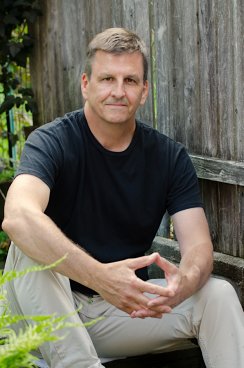 Have you seen a tall gent about the Boston Athenæum, usually donned in a handsome vest and shepherding a group of wide-eyed visitors through the building? If so, you have come into contact with an Emmy award winner, a victor of Jeopardy!’s Tournament of Champions, a Boston Athenæum docent, an author, and all around good guy—otherwise known as Fritz Holznagel.

Fritz was born in 1961 in a small town just outside Portland, Oregon. He remembers his childhood fondly and to this day feels a deep connection to the Pacific Northwest. He received a Bachelor of History degree from Willamette University, but rather than pursuing an academic career he began working at Will Vinton Studios (now Laika, LLC), an independent film studio specializing in Claymation™. Fritz has always had a knack for writing and this skill allowed him to rise through the ranks at the studio. He started developing scripts for the studio’s children’s shows and CBS specials, and eventually won an Emmy for his work on the CBS TV special, A Claymation Easter, in 1992.

Fritz made the transition from West Coast to East Coast in 1998, when he began working for Lycos, an early search engine company based out of Waltham, MA. He joined the company during the boom of the dot-com world, but, unfortunately, the “dot-com-bubble,” as it came to be known, burst in 2000 and the company “went south,” to use Fritz’s terminology. In spite of the burst, he landed on his feet and since then has worked extensively for Google, while also maintaining a robust freelance career, primarily in writing.

Concurrent with his career path—and at times intertwined with it—Fritz’s naturally curious mind and talent for soaking up fun facts, historical details, and the like have paved the way for some unique opportunities. For instance, an early iteration of his freelance career was writing questions for such popular computer learning games of the 1990s as Where in the USA is Carmen Sandiego?. Perhaps more sensationally, Fritz’s aptitude for trivia landed him on Jeopardy! five times, of which he won four rounds. In 1995, he was invited to Jeopardy!’s Tournament of Champions—and won. He is proud of his win but also modest, and says there were lucky breaks in the questions—though one could argue his examples of “lucky break questions” are as bewildering as any other question one could be asked on Jeopardy!. Regardless, it was quite the boon for him to win and he considers it a life changing experience, one that transformed his conception of himself. Plus, it is a fantastic “calling card,” as he puts it. The Athenæum has benefitted from his experience on Jeopardy! as well, with Fritz serving as Trivia Master in our annual Trivia Night events, which commenced in 2016.

On the subject of the Athenæum, how did Fritz discover 10½ Beacon? Similar to other members, by simply walking by the bright red doors. Upon entering, Fritz was thrilled by the Athenæum’s rich history, inspired by the fifth floor with its views and coveted seats, and grateful for the assistance of the reference librarians. In short order, he became a member and a docent. He loves the sharing aspect of being a docent, while also noting that it is an easy job since “delights are everywhere.”

And, indeed, it is at the Athenæum, on the fifth floor, that Fritz has done much of his writing, including his book, The Ultimate Droodles Compendium: The Absurdly Complete Collection of all the Classic Zany Creations of Roger Price (2019). His greatest joy working on this project was learning about the book’s subject, Roger Price (1918–1990), an American humorist and creator of MadLibs and Droodles—silly drawings with even sillier explanations. Fritz has been a fan of Price and his Droodles since he was a boy and he credits Price with introducing him to the hilarity of absurdist humor. The project was not without struggles—Price’s life was not well-documented, and he was estranged from his family for much of his life. Thus, Fritz had to piece together disparate bits of information into a cohesive whole. Still, Fritz enjoyed the project immensely and was happy to learn more about a childhood idol.

When not writing books, working at Google, doing freelance work, or hosting trivia nights at the Athenæum, Fritz can be found watching old movies with his wife, hanging out with Jeopardy! pals, crafting cocktails, and taking trips home to the West Coast. He is contemplating another book project, but prefers to keep mum on this for now as it is still in the early, contemplative stages—but stay tuned.