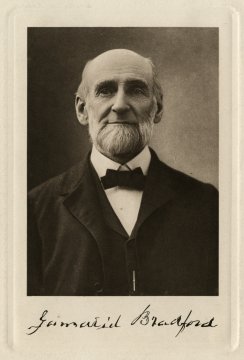 Gamaliel Bradford (1863–1932), the fourth of this name, was a prolific author and biographer. Since childhood, he dreamed of being a writer, but failed to thrive until he switched from fiction to biography. In the April 27, 1932, issue of the Nation, he’s quoted thusly: “I should prefer to write great novels, but we do what we can, not what we should like.”

Charles Knowles Bolton, long-time librarian of the Athenæum, memorialized Bradford for the Massachusetts Historical Society in 1933 and expounded on the latter’s enjoyment of the Athenæum’s “warmly human influence.” Recorded in volume 65 of their Proceedings, Bolton said Bradford, just as his father before him, sent a “barrel of apples to the staff” every year at Christmas.

Bradford, according to Bolton, mentioned the Athenæum in his book Quick and the Dead. Bolton also said that Bradford researched his biographies at the Athenæum: “He always favored the purchase of source material for the study of character, and it did not matter if the ideals of people so pictured were utterly at variance with his own. In his sonnet to Sainte-Beuve he referred with approval to him who could
‘pray with saints yet press the sinner’s hand.’”

But Bradford also used the collections for his own enjoyment. A fan of detective novels, Bradford once said, “There is nothing so soothing as murder.” Bolton recounted an interaction between Bradford and a trustee:

E.M.P.: Here is a book for Mr. Bradford. It is called Murder for Profit.
G.B.: No. I prefer Murder for Pleasure.

As God Made Them: Portraits of Some Nineteenth-century Americans
Cutter Classification 65 .9°B72 .a

Elizabethan Women
Cutter 7BE6 .B728

Unmade in Heaven: A Play in Four Acts
Cutter VED .B723