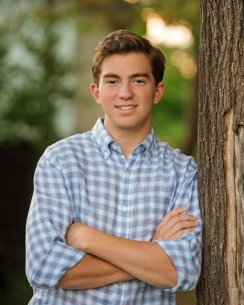 I recently had the pleasure of catching up with Hingham High School senior Hayden Sousa, the winner of the Athenæum’s 2021 National History Day in Massachusetts prize for excellent use of primary sources. Sousa’s paper, “Communications in History: The Impact of Ted Sorensen’s Speechwriting During JFK’s Presidency,” earned him the award during the spring of his junior year.

Sousa found himself interested in the Kennedy family after reading Bobby Kennedy by Larry Tye, which spurred him to learn more. In his reading, he encountered Ted Sorensen’s name. So, when Sousa learned the 2021 History Day theme was “Communication in History,” he decided to create a project about John Kennedy’s speeches, and specifically those that Sorensen wrote for him.

At the encouragement of his history teacher, Ms. Petrie, Sousa sought out primary sources focused not only on Kennedy and Sorensen, but also on the people who worked with and around them. Sousa found transcripts of forums that had been held at the John F. Kennedy Presidential Library and Museum. From them, he was able to ascertain that Robert McNamara and other members of the Kennedy administration recognized that the relationship between Sorensen and the president transcended that of a typical speechwriter and politician; together “they were creating something huge.”

In addition to mining primary sources, Sousa consulted secondary sources. When I asked Sousa if he could recommend a title to people interested in learning about the Kennedys, he was hard pressed to pick just one, but did name Grace and Power by Sally Bedell Smith and Unfinished Life by Robert Dallek.

Ultimately, Sousa’s research led him to his argument that, “the unique relationship between JFK and Sorensen allowed them to produce speeches that compelled a younger generation and the African American population to believe in the United States and to push for progressive change.”

To present his argument, Sousa chose to write a paper. National History Day competitors create a project in one of five formats: documentary film, exhibition, paper, performance, or website. For Sousa, the choice was strategic. He had considered making a documentary film, thinking it would be helpful for the viewer to hear John Kennedy speaking. But the main focus of his project was not the way Kennedy delivered his speeches, but rather the words Sorensen wrote. He decided that writing a paper featuring quotations from speeches would help his reader focus on the text rather than the oration.

With his project now a few months behind him, Sousa has had time to reflect on his approach to the topic and his treatment of the Kennedys in his paper: “What I’ve noticed is that I make the Kennedys, specifically JFK, seem perfect, and they really weren’t. Like everyone, they had their faults. If there was one thing I could change in the paper, I would go back and point out some of those flaws. It’s important to point out faults because history is about learning…we should be not only learners of history but also critics of history.”

Given the careful attention Sousa put into his project, from topic to research methodology to format, it is not surprising he imagines history and writing as part of his future career plans. Although he does not aspire to be a politician himself, Sousa can see himself writing for one: “Writing and reading are the best ways to get points across, get inside the human mind, communicate…To have the chance to write a speech for someone who can say something important would be really cool…I love history, politics are interesting, [and so are] government and civics…I might not want the spotlight, but [would like] to help someone else.”

As our conversation came to a close, Sousa offered a final recommendation: “Anyone who’s interested in JFK should definitely study RFK…He stuck up for what he believed in. He was willing to change his mind. Not everyone is open to that today.”

If this wise young historian is any indication, the future of our country is bright.