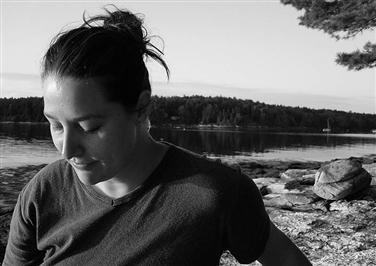 Jill McDonough grew up in North Carolina, attended Stanford University, and received her MFA from Boston University.  The recipient of fellowships from the National Endowment for the Arts, the Fine Arts Work Center, the New York Public Library, and Stanford’s Stegner program, she has taught incarcerated college students through Boston University’s Prison Education program since 1999.  She is also affiliated with the Harvard Extension School, Stanford’s Online Writer’s Studio, UMass-Boston, and Grub Street, Inc.  Jill’s work appears in Slate and The Threepenny Review.

We all remember exploring our parents’ bookshelves as youngsters.  At five-years-old, the name Ogden Nash, discovered among her parents’ books, gave Jill the impression of an “incantation in a foreign language.”  It was encounters with Ogden Nash that drew Jill to poetry.  Jill wrote poems because it was a way of constructing a problem, while at the same time discovering the solution.  As a youth, writing poetry also served a practical purpose; if bored in school, it was easier to write during class than doodle.

The first stages of Jill’s writing process are what she calls “flabby pages that don’t make any sense.”  She knows, however, that “gems” are hidden within, and so Jill sifts through the pages, writing and rewriting, until she finds ways to connect her gems.  Then it is typed up and becomes a first draft.  Jill is often influenced by her students, and by her research—it is a way to feel closer to “other times in real places.”

Jill’s first book of poems, Habeas Corpus, was published by Salt in 2008.  At the time, Jill had a fellowship with the Fine Arts Work Center in Provincetown, MA, and was researching shipwrecks and pirates in New England history.  Jill then turned to methods of execution during that period and discovered hanging, tarring, and gibbeting.  This research led to a general inquiry into the different ways people were executed over the years, and what thought processes were behind each stage in the evolution of execution.  The book is in sonnet form; Jill chose this particular form to maintain the tone she was looking for—respectful, but candid.  As she puts it, the sonnet is “too short; there’s no time to look away.”

Jill’s next book is called Humane Bodies, which tackles the history of medicine.  The poems have titles like “My History of CPR,” or “Vesalius,” or “Of Women’s Testicles.”  That last title came from a chapter in a 1684 anatomy book, Humane Bodies Epitomized by Thomas Gibson.  Gibson’s work gave Jill the title for her book, as well.  Gibson was using a different spelling of the word “human,” but the play on words makes for an interesting title.

When she isn’t writing or teaching poetry, Jill’s reading it.  She owns more books of poetry than any other genre, but she also enjoys literary fiction.  Jill is a supporter of the transitory approach to enjoying literature; she’ll buy up a bunch of titles from the Goodwill, or from a secondhand bookstore, and pass them on when finished.  She likes to have a stack of reading material around.  Among her favorite authors are Yusef Komunyakaa,  George Eliot, Evan Boland, and David Ferry.  Jill also admires writers who keep working despite obstacles, and she mentioned Todd Hearon and Paul Harding as two writers she particularly admired.

Jill joined the Athenæum in 2001 after winning a fellowship, and the Athenæum played a role in the research she conducted for Habeas Corpus.  She ended up staying with the Athenæum because of Mary Warnement, whom she called the “human Google,” and because of the cheese.  The first Athenæum party Jill attended involved watching The Thin Man while enjoying “great cheese” and martinis.  To quote Jill, “who wouldn’t want to join that?”  Jill also expressed her admiration for Doug Caraganis, who “notices everything, and always has some terrific random tidbit to share.”  In addition, she can get more work done in two hours on the fifth floor than she can anywhere else.  “The real, secret bargain of the Athenæum,” she says, “is that time warp.”