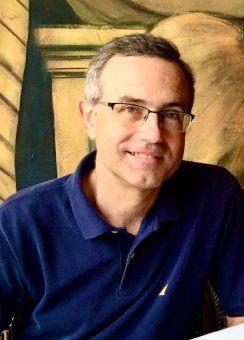 Author Joel Farrell and I sat down to talk about some of his recent and upcoming projects. Mr. Farrell had a career in computer science before retiring and shifting his focus to historical research and writing. He’s published Venice’s Finest Hour and The Radical Greek Idea. His next project, still in the beginning stages, focuses on the antebellum migration of New Englanders to Kansas. Our conversation has been edited for brevity and clarity.

Q: Can you tell me about your background, both personal and academic?

JOEL FARRELL: I grew up in Kansas where I went to Kansas State University. I got my bachelors in computer science, but I started as a history major. I was torn between science and history. I decided to go the scientific route and have history be my avocation. Now that I’m retired I’ve switched it around. After graduating, I moved to upstate New York to work and then I transferred to Cambridge. In between there I got a masters in computer science. I’ve been living here in the Boston area since ‘96. This is a home base for us.

JF: Some people told me about it. When I first looked into membership, the way to join was rather involved. You had to know somebody to write a recommendation. I thought about it for a while, then I went to the Boston Book Festival where the Athenæum had a table with materials. Then, I went to one of their exhibits and I just decided to join. I have not regretted it.

Q: What books have you written and what are you currently working on?

JF: My first book was called Venice’s Finest Hour. The book grew out of my interest in Venice. I wondered how you could have this small city that was a world power for hundreds of years. I was fascinated. My book is about a pivotal episode in its history in the fourteenth century when Venice almost lost its power and would have never been heard of again. From there, it became the great empire and cultural center we think of today. There were a lot of materials here in the Athenæum that I used.

The second book I wrote came from a long time interest of mine: ancient Greece. The Radical Greek Idea is a story of the birth of democracy but with a focus on how it developed, how it worked, and how it worked under pressure. I looked at how the first experiment in direct democracy could actually succeed in a place that had to fight big wars and manage an empire. It’s hard to imagine.

I’m currently working on a third book which is about a completely different topic. It turns out that before the Civil War the admission of the territory of Kansas as either a free or slave state was an enormous issue. It dominated the national press and congressional debates. A group here in Boston organized an immigration system to bring New Englanders to settle in Kansas so they could vote on a constitution and legislature to make Kansas a free state. Many people in Kansas can trace their roots to New England and Boston in particular. There is this great connection between that story and how Kansas was founded and the principals it was founded upon. It’s interesting that the Athenæum has books by principal characters in the story and some donated by those same people.

JF: When I first started thinking seriously about doing historical writing I was very interested in the research and writing aspect. I looked at a lot of different possibilities and for the first book I wanted a fairly narrow topic. I knew about this episode in Venetian history, the Chioggia War, from other reading that I’d done, which was a really good way for me to dive in. I knew that primary sources I could read would be a big problem. I did find things and I got some translations and I relied on some other people’s translations but it was very difficult.

Like I said, I have a great interest in ancient Greece and ancient history in general, so I started to look around for what sources were out there. I found that there are so many resources that could really help me. The idea of democracy in Greece came to my mind because of a reading I’d done about the time there was a big problem. My idea was originally a little different for the book, but you have to keep an open mind when you’re doing research. I changed my course part way through.

Q: What do you hope readers will get from your book?

JF: I’ve always agreed with “history is philosophy teaching by example.” I wouldn’t call what I’m doing philosophical history, but I hope people gain a greater perspective. With Venice’s Finest Hour, I’d like people to discover what Venice really was and maybe ask some questions about how all of Venice could come to be. Most people see Venice as this tourist’s vacation playground.

With The Radical Greek Idea, it’s easier to get a perspective on what is happening now and our political processes and our democracy if you can step away and look at it through a different lens. Everyone was involved. There were no representatives. There was no president. It was just “we all decide everything.” Being separated from all our current issues and ideologies I think could really help people to see things a little more clearly and see what is really important.

Q: What aspects of our collection did you use in your research?

JF: The collection of historical works on Venice here is very deep. There is also a collection of state papers between the Republic of Venice and England and that throws a lot of light on what was going on at the time. It was a really excellent primary source. Other than that, the Athenæum doesn’t have a lot of primary sources on Venice but there are a few.

For Greek history, I think the Athenæum’s collection reflects the interests and standards of an educated and cultured person at the time of the early days of the Athenæum. There is an enormous classics collection. I was able to find everything I wanted as far as primary sources in both English and Greek. That was an excellent resource and a big help to me. For all of my research, the access to JSTOR I get through the membership has been invaluable.

Q: Can you talk about your writing process? Does it vary from book to book or topic to topic? Has the pandemic affected the process?

JF: My first book was before the pandemic, but I generally try to get an idea of what I want to work on and then I do a lot of general reading. Once I’ve gotten to a certain point then I start narrowing in. I do deep research and I keep a lot of notes. I go through and organize those notes a lot so when I’ve completed the main research phase, of course you always have to go back and do more later, I‘ve got it to where it almost writes itself. My writing doesn’t take long at all. Since I don’t work in computer science anymore I’ve got time. The pandemic came right as I published my second book last spring/summer. I started doing my early reading for my next project. I didn’t have much else to do. I had less distraction. It didn’t affect me as much as other people.

Q: What parts of the writing and research process do you like? And what parts do you dislike?

JF: The research phase, in some ways, is my favorite part. I get to do things I enjoy like learning. The initial writing is probably the thing I enjoy the second most. It tends to flow pretty fast because of the amount of preparation I’ve done. Then comes revisions and the editorial process, which is not as fun. I push to get it done. I mean it’s important. I want a high quality deliverable, but it’s not quite as stimulating.

Q: Do you have a favorite study spot in the Athenæum?

JF: If there is nobody there, I like the third floor. If there is, I’m usually on the second floor. I find there is too much competition for the fifth floor and it is too far away from the places that I have to go, like the drum. When I come for relaxation or just to find books for my own pleasure I’ll often sit down in the art reading room. In some of the newsletters and such, people talk about how this is an undiscovered place, and I say “well, stop talking about it!”

Q: What are some of your favorite books? I know it’s a tough question so you can name as many as you like.

JF: My favorite set of novels is the Alexandria Quartet by Lawrence Durrell. The language is mesmerizing and the images are just amazing. Unfortunately, he didn’t do a lot more than that. One of my favorite history books is John Julius Norwich’s A History of Venice. I find that his prose style for describing history, places, or any of the other things he has written about is remarkable. When I retired, a friend of mine and I took on a big reading project to read Proust. A lot of people abandon that about halfway through the first volume, but I actually liked it. I got to like it more and more. I now rank that as one of my favorites.

Q: What are you reading right now?

JF: Of course, I’m still reading a bunch of books from the 1850s and 60s about territorial Kansas. I just finished Mary Beard’s The Parthenon. Amazingly, she was a presenter here at the Athenæum a few years ago. I’m now reading Carlo Rovelli’s Helgoland, which is a science book.