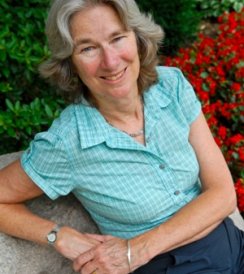 Liza Ketchum was born in Vermont to Martha Graham dancer, Barbara Bray Ketchum, and historian, Richard M. Ketchum.  As a child, she created an imaginary world for herself and spent many hours composing stories about it.  Both parents encouraged her creative interests, and her father would illustrate the stories she and her brother wrote about their stuffed animals.

Ketchum studied creative writing at Sarah Lawrence College as an undergraduate and received her Master’s in Education from Antioch University Graduate School.  In 1969, she spent a year in England studying some of that country’s progressive education models.  These models encouraged creativity and the exploration of learning through a child’s strengths and interests.  She later co-wrote a book about British primary education (Children Come First) and opened a pre-school in Marlboro, Vermont, where she was able to implement many of the techniques she had studied.

At one point, children’s writer and friend Katherine Leiner commented, “Since you teach children and you like writing—why not write for children?”  Ketchum took that suggestion and coupled it with her love of history.  She remembers that when she was young, history was taught on the following topics: Ancient Greeks and Romans, Wars, and famous American white men.  Her books have sought to address what was omitted by considering, for example, what it might have been like to be a half-Pequot, half-Anglo farm boy in Vermont just after the Revolutionary War (Where the Great Hawk Flies, winner of the Massachusetts Book Award); a surfer teen who doesn’t fit the cultural mold of his straight, male peers (Blue Coyote); orphans travelling from Illinois to Kentucky who faced the very real dangers of indentured servitude (Orphan Journey Home); and the experience of young entrepreneurs during the California Gold Rush (Newsgirl).  Other books include non-fiction titles focused on ordinary people who have accomplished extraordinary things.  She is currently working on a novel that explores the adventurous, popular side of Vaudeville, as well as the prejudice and challenges faced by African American performers.  Many of her plots are inspired by her personal genealogical research.

Ketchum’s father gave her the gift of a Boston Athenæum membership many years ago.  She was living in Vermont at the time but took advantage of our book mailing program.  She loves Virginia Woolf and lately has been reading a lot of Jim Harrison.  She greatly admires young adult books by Gary Schmidt, Ellen Levine, M.T. Anderson, all teaching colleagues as well as members of her writing groups.  For comfort and inspiration, she turns to the poetry of Mary Oliver, and when she needs to be completely diverted, she enjoys the mysteries of P.D. James and Donna Leon.  Ketchum relies on the Boston Athenæum’s collections for research as well as for pleasure.  A favorite title is John David Borthwick’s Three Years in California.  She found both his gold rush stories and original art inspiring and was able to use some images in her non-fiction book, The Gold Rush. As a part of our Bicentennial series in 2007, Ketchum, along with M.T. Anderson, Irene Smalls, and Rebecca Doughty, read aloud from children’s books written by Athenæum members from the past.  Ketchum’s choice was Barbara Cooney’s Miss Rumphius.

Today, Ketchum lives in Massachusetts and teaches writing for children and young adults through Hamline University’s low-residency MFA program in St. Paul, MN.  She has recently completed a new novel that takes place in Boston in 2004 and is about “death, war and baseball.”  She enjoys talking baseball with members of the library’s staff and confesses to having purchased satellite radio for the family car so that she and her husband can listen to Red Sox games on the road. To learn more about Ketchum see her website.