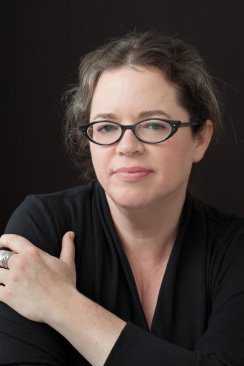 Everything in its place. Clean as you go. Whether baking or writing—and Louise Miller does both—the job requires a methodical approach. “I do my best plotting and my best thinking about writing when I’m baking. I’ve worked that into my process, so now at the end of my writing day, in the evening, I make myself a list of problems and questions and I put that list next to my prep list at work in the morning. I’ve figured out more plot issues with my novel when I had to make ten apple pies,” she says, and although she’s laughing as she says this, you know it’s absolutely true.

Miller is talking about the creation of her debut novel, The City Baker’s Guide to Country Living, much of which she wrote and revised ensconced in silence on the Athenæum’s contemplative fifth floor. She has served the Union Club as pastry chef for the past thirteen years and counting. She arrives at six in the morning, bakes until two in the afternoon, then walks around the corner to the library to write her way into the resolving evening hours. “I find there aren’t too many distractions, the three or four doors it takes me to get here, so it keeps me disciplined.”

Discipline is a recurring theme in a conversation that covers a childhood split between Watertown and Wellesley (she moved to the latter with her father when she was nine), a fortuitous opportunity to see Hamilton before it went to Broadway and exploded (she loved the show, wishes high school students could see it, and is disheartened that demand and ticket costs are so prohibitive. “I’m a big proponent of art being accessible. Anyone with a body can relate to dance.”), and a visit to the Topsfield Fair in 1999 where, on a whim, she decided to enter a pie baking contest.

Told to report to the arts and crafts building at 7:00 p.m. for the contest results, Miller arrived at the expansive, grange hall-like room to find upwards of one hundred people silently staring down three people in a glassed-off kitchen. “It felt like the lights were dimmed, and the kitchen was glowing like an aquarium,” she recalls. “The judging had run over. Everyone was just watching three people eat pie. The room was dead silent. It was so tense and bizarre. And that image haunted me for so long: what could be at stake for these people? Why would they care so much?” This encounter was the first ingredient for what would ultimately become The City Baker’s Guide to Country Living.

The story begins in Boston where protagonist Olivia Rawlings enjoys work as a pastry chef for a private club before accidentally setting ablaze the place in a baked Alaska presentation gone awry. Cuts and burns are inevitable. Rattled and in need of respite, she drives to Vermont with her dog Salty to visit her best friend Hannah and to consider her next step. To read the rest, stop by the New Book Shelves in the first-floor Bow Room.

Work on the novel began in 2009, and in 2012, Miller received a scholarship to attend GrubStreet’s novel incubator program, where she learned her tendencies as a writer: she writes linearly, and visually too, focusing first and foremost on transcribing the events as they unfold in real time in the playground of her mind. She learned how to deliver formal critique on her peers’ work, how to cull the most useful bits of feedback from a wide and uneven sea of it, and how to not be precious about when/why/how she worked—i.e., how to be disciplined, to work any time there’s time, not just when she feels the electricity of inspiration.

As for writers who inspired her to pursue the craft, Miller was most moved by those who were writing about the mundane. Raymond Carver being so formative and transformative in this respect that she named her dog in his honor. “I couldn’t believe that someone could make art out of something so familiar to me. That was what really broke me open.”

Her excitement to create is clear both in her writing and our chat. She mentions more than once, often without my prompting, of the joy of writing, of the unadulterated pleasure of escaping into a world of her own design. “Writing this book was my refuge,” she says at one point. What, then, were some of the great struggles? “Writing is all problem solving—that’s the hardest part.” Problem solving and decision making. You make one thousand decisions, and then you make one thousand more, and one thousand more after that—and that’s only the first chapter. It can get exhausting just thinking about it, so let’s end on a more positive note.​

What was her favorite part of the entire experience, door to door? Was it the perfecting of an earlier draft? Getting the dang story sold? Or maybe helping to choose the title and cover? How about the sweet agony of sitting alone in a room in a protracted game of chicken with that smug and taunting blank page? “I think finishing the first draft was probably my favorite part,” she says. “Because I just had started a million things in my life and not finished them, and so finishing felt really, really good.”

And as someone with the same completion complex, all I can say is: amen to