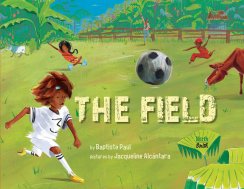 Check out these sporty books, perfect for spring.

The Field by Baptiste Paul and illustrated by Jacqueline Alcantara
(New Picture Book Basket)
A community comes together for a game of futbol (soccer). They clear a local field of cows and work together to get all they need for a fun game.

Ready for the Spotlight! by Jaime Kim
(New Picture Book Basket)
Tessie loves ballet and feels like she is very good at it. That is, until her big sister Maya lands the solo and outshines the rest of class. Even Tessie’s freestyle dancing can’t raise her spirits. Perhaps the spotlight will be big enough for two and the sisters can each help each other dance even better.

Zuri Ray Tries Ballet by Tami Charles and illustrated by Sharon Sordo
(New Picture Book Basket)
Zuri loves trying new things with her best friend Jessie. The two do everything together and always like the same things, until ballet camp. Jessie is happy as can be doing pirouettes in a pink tutu, but Zuri can’t find her balance and feels uncomfortable in the ballet clothes. Will Zuri be able to find a way where she and her best friend can have fun at ballet camp? Perhaps her family will help inspire her.

Don’t Throw it to Mo ! by David A. Adler
(Beginning Reader Children Picture Book ADLER)
This wonderful beginning reader series follows Mo as he explores different sports. Mo is the smallest on the football team. His teammates avoid throwing the ball to him because he is clumsy. Coach soon comes up with a plan to make Mo the team’s secret weapon.

Lola Levine is Not Mean! by Monica Brown and illustrated by Angela Dominguez
(PZ7.B81633 Is 2015)
Lola loves writing in her diary and playing soccer. When a soccer game gets too competitive at recess, Lola accidentally hurts a classmate. Suddenly everyone is calling her “Mean Lola Levine.” With the help of her family and her best friend, Lola will need to learn how to navigate school and show others she isn’t mean.

Fast Pitch by Nic Stone
(PZ7.S8825 Fas 2021)
Shenice Lockwood is determined to lead her team, the Fulton Firebirds, to win the regional softball championship. As the only all Black team in the league, the Firebirds work twice as hard to prove that Black girls belong at bat. When her great-uncle Jack reveals that a career-ending—and family-name-ruining—crime may have been a setup, Shenice’s focus is tested. Will she be able to lead her team to victory and uncover the truth about her family’s past?

The Crossover by Kwame Alexander
(PZ7.A3771 Cr 2014)
This engaging, fast-paced novel in verse follows Josh Bell and his family. Josh and his brother, Jordan, are kings on the basketball court. As the brothers work to come to terms with growing up, a life changing event happens that will change their family’s lives forever.

Ghost by Jason Reynolds
(PZ7.R333 Gh 2016)
Ghost loves running. But not on a track team, he has always run on the basketball court. When he challenges a sprinter to a race, the track coach notices him and his talent. But Ghost isn’t just running for fun, he is also trying to outrun his past. Will he be able to embrace his talent on the track team or will his past finally catch up?

Out of Left Field by Liza Ketchum
(PZ7.K488 Ou 2014)
A perfect book for any Sox fan excited for the season to start at the end of the month. Brandon McGinnis is excited for the summer of 2004. He’s on the varsity swim team, has a job, will get to spend time with his friends, and see games with his dad. He is most excited to see if this will be the year the Sox end their 86 year curse. When tragedy strikes, Brandon’s plans for the summer fall apart. Instead, he begins to unravel his father’s past, discovering a 30 year old secret tied to the Vietnam War.

Women in Sports : 50 Fearless Athletes Who Played to Win by Rachel Ignotofsky
(GV697 .A1 I33 2017)
A beautifully illustrated look at women athletes from the 1800s to now. Learn more about famous athletes and discover new lesser-known trailblazers from the past.

Undefeated : Jim Thorpe and the Carlisle Indian School Football Team by Steve Sheinkin
(GV958.U33 S54 2017)
This book is much more than an astounding underdog sports story. While Sheinkin tells the tale of the Carlisle Indian School’s incredible football team, he also tells the story of the atrocities the American government committed against Native Americans. Diving into the history of the boarding schools meant to eradicate Native cultures.

Growing Up Pedro by Matt Tavares
(Lg GV865.M355 T39 2015)
This picture book biography is perfect for young baseball fans. Follow Pedro Martinez as he grows up in Manoguayabo, Dominican Republic. He and his brother, Ramon, would play baseball together dreaming of one day playing in the major leagues together. Tavares tells the tale of how that dream came true.

Darius the Great is Not Okay by Adib Khorram
(PZ7.K4955 Da 2018)
Darius feels lost in between his identities. As an Iranian American, he doesn’t feel as American as his classmates or as Iranian as his extended family. He is thus very anxious for his first trip to Iran. The trip is further complicated by Darius’s clinical depression which is less accepted there. While getting to know his mother’s family, Darius also meets Sohrab, his grandparent’s neighbor. The two become fast friends bonding over soccer. Sohrab becomes Darius’s first true friend.

Akata Witch by Nnedi Okorafor
(PZ7.O39 Awi 2017)
This urban fantasy follows Sunny who was born in New York but now lives in Aba, Nigeria. Contrary to her name, sunny is albino and therefore sensitive to the sun. All she wants is to be able to play football and fit in at school. When she befriends Orlu an Chichi, those dreams of being a normal girl are abandoned. The escape to the world of the Leopard People, a place where your worst flaw becomes your greatest asset. There, they form a Oha Coven and work to track down a man responsible for kidnapping and harming children. Will Sunny and her friends be able to find him and defeat him?

Spinning by Tillie Walden
(CT275.W1788 A3 2017)
In this graphic memoir, Walden explores what it was like to come of age and come out in the world of figure skating. Having been a figure skater for ten years, skating was a large part of her identity as a teen. When she changed schools, discovered a passion for art, and started seeing her first girlfriend, Walden began to question if she still wanted to skate. A beautifully illustrated look at changing identity and continually finding oneself, this graphic novel is a must read for anyone sorting out who they are and who they want to be.