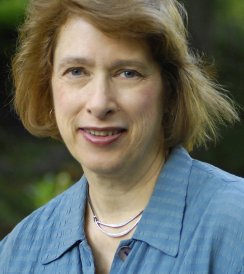 Megan Marshall was born in Oakland, California to a pair of city planners. At the age of five, her family moved to Pasadena into a home built by New Englanders in the 1920s.  Growing up in a center-entrance colonial with white clapboards and green shutters, surrounded by many generations of this family’s furnishings and books (including early editions of The Five Little Peppers and Little Women), Marshall found herself endlessly curious about the Northeast. Her interest in the private lives of famous figures began early as well. Every Thursday afternoon, she’d help her grandmother, the local children’s librarian, shelve books. Some of her favorite books in that library came from a series of biographies for children, which included figures such as Marie Curie and Amelia Earhart. Marshall has been drawn to libraries ever since and traces her comfort with the research process to this early exposure.

While she originally enrolled at Bennington College as a double major in literature and music (harpsichord), Marshall eventually longed for more urban surroundings. In 1974 she moved to Cambridge, where she worked as a clerk at the Harvard Book Store and as an editorial assistant to Jonathan Kozol. She later enrolled in the English program at Harvard, where she had the opportunity to study with poets Robert Lowell and Elizabeth Bishop and the eminent translator Robert Fitzgerald. For Marshall, poetry was a wonderful way to learn about writing because “each word had to speak and be useful.” All three of these professors had died by 1985; her mentors were gone, but she felt grateful to have had a window into their world. Believing that their dramatic lives and their creative work were somehow entwined, Marshall became even more attracted to the idea of biographical research and writing.

Marshall first learned about Elizabeth, Mary, and Sophia Peabody in one of Harvard’s first women’s history courses taught by Barbara Miller Solomon. At the time, Margaret Fuller was one of the great heroines of Second Wave Feminism and Marshall thought the three Peabody women, friends and contemporaries of Fuller, deserved to be better-known too. She spent two decades on the project only to find that by the time The Peabody Sisters: Three Women who Ignited American Romanticism was published in 2005, Fuller herself had been forgotten by the general reading public. Marshall believed Fuller was every bit as important as Emerson and Thoreau, and yet she lived in their shadows.

Marshall suggests that Fuller, known in America as the greatest female intellectual of her day, did not maintain as powerful a reputation as Emerson and Thoreau because she wrote in a variety of styles, and rarely in the conventional essay form in which the two men excelled. Fuller was a travel writer, gender theorist, and investigative journalist; this type of writing isn’t usually taught in high school and college English courses. Marshall argues that for writers like Fuller and the Peabody sisters, biography is an ideal way to introduce readers to their unconventional lives and work. Marshall’s aim has always been not simply to address gender gaps in the historical record, but also to help the general reader understand concepts that were important to these women, such as Unitarianism, Transcendentalism and numerous reform causes. Readers of Marshall’s biographies get the chance to imbibe these ideas along with Marshall’s heroines.

As a research assistant to poet and scholar Nadya Aisenberg, Marshall first came to the Boston Athenæum in the mid-1970s. She immediately perused the large selection of biographies and published letters on the new book shelves and remembers borrowing editions of the correspondence of F. Scott Fitzgerald and Flannery O’Connor. While not yet a biographer herself, she was starting to think about how one might use a collection of letters to learn something meaningful about their writers. Years later, she was thrilled to find that the Boston Athenæum had one of the few editions of The Christmas Eve: A Tale from the German published by Elizabeth Peabody in 1842, which was likely translated from the German by her mother.  (Both Elizabeth Peabody and Margaret Fuller were among the first Americans to teach themselves German in order to read the Romantic writers whose works were not yet translated into English).

Marshall has returned to the Boston Athenæum numerous times to give public readings from her work and to introduce her students from Emerson College’s Writing, Literature and Publishing Department to our rich special collections. She finds that many of her students have been told to, “Write what you know,” which too often leaves them wandering aimlessly in their own personal narratives. “What I like to do is bring them into Boston’s great libraries and archives and expose them to stories from the past. Then they can write what they’ve learned.” One of her courses for graduate students in the MFA program is called “Sources of Inspiration: Archival research for writers.” Students are “let loose” in the archives and guided in identifying topics of interest and shaping narratives from the sources.

Presently, Marshall has turned her biographer’s gaze back to the Peabody, Hawthorne and Mann families. She is particularly interested in Nathaniel Hawthorne’s older sister, Ebe, who never married and was a notorious recluse, as well as Nathaniel and Sophia’s daughters, Rose and Una. Marshall sees this project as “experimental.” Rather than constructing a typical narrative, she’ll be following the interwoven relationships of these families in the years preceding the Civil War until the end of the nineteenth century. Ultimately, Marshall feels it is inspiring to be reminded of the energy these figures had. “They were idealists who believed that society could be reformed to become kinder and more just. They were committed to their ideas and then to acting on them.”