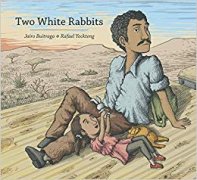 “In this moving and timely story, a young child describes what it is like to be a migrant as she and her father travel north toward the US border. They travel mostly on the roof of a train known as The Beast, but the little girl doesn’t know where they are going. She counts the animals by the road, the clouds in the sky, the stars. Sometimes she sees soldiers. She sleeps, dreaming that she is always on the move, although sometimes they are forced to stop and her father has to earn more money before they can continue their journey. As many thousands of people, especially children, in Mexico and Central America continue to make the arduous journey to the US border in search of a better life, this is an important book that shows a young migrant’s perspective” — Provided by publisher.

“A moving tale about friendship, new beginnings, and cats” — Provided by publisher.

A young African American girl and her family leave their home in Alabama and head for Lincoln, Nebraska, where they hope to escape segregation and find a better life.

When a boy and his family move to a new house, he devises an ingenious way to meet people in the neighborhood.

Nine Months: Before a Baby is Born by Miranda Paul ; illustrations by Jason Chin

As a baby grows in her mother’s womb, a soon-to-be big sister and her family spend nine months preparing for the newest member of the family to arrive.

A Piece of Home by Jeri Watts ; illustrated by Hyewon Yum

When Hee Jun’s family moves from Korea to West Virginia he struggles to adjust to his new home. He can’t understand anything the teacher says, and even the sky seems smaller and darker. Hee Jun begins to learn English words and make friends on the playground. One day at a classmate’s house he sees a flower he knows from his garden in Korea: mugunghwa, or rose of Sharon. Hee Jun is happy to bring a shoot to his grandmother to plant a “piece of home” in their new garden.

Yasmin the Fashionista by Saadia Faruqi ; illustrated by Hatem Aly

While her parents are out to dinner, a bored Yasmin decides to try on some of her mother’s clothes, including her new shalwar kameez, which gets ripped–but with the help of Nana, Nani, and a glue-gun, the garment gets fixed, and Yasmin puts on an impromptu fashion show when her parents get home.

We Are Growing! by Laurie Keller

“Walt is not the tallest or the curliest or the pointiest or even the crunchiest. A confounded blade of grass searches for his ‘est’ in this hilarious story about growing up”–Provided by publisher.

In three brief stories, two fox sisters meet the boy next door, play pirates, and camp out in the yard in sleeping bags.

Zenobia July, an excellent coder and hacker, investigates a mystery while wrestling with the challenges of a new school, a new family, and presenting her true gender for the first time.

The Book of Story Beginnings by Kristin Kladstrup

After moving with her parents to Iowa, twelve-year-old Lucy discovers a mysterious notebook that can bring stories to life and which has a link to the 1914 disappearance of her great uncle.

Year of the Dog by Grace Lin

Frustrated at her seeming lack of talent for anything, a young Taiwanese American girl sets out to apply the lessons of the Chinese Year of the Dog, those of making best friends and finding oneself, to her own life.

“Juana’s life is just about perfect. She lives in the beautiful city of Bogotá with her two most favorite people in the world: her mami and her dog, Lucas. Lately, though, things have become a little less perfect. Mami has a new hairdo and a new amigo named Luis with whom she has been spending a LOT of time. He is kind and teaches Juana about things like photography and jazz music, but sometimes Juana can’t help wishing things would go back to the way they were before. When Mami announces that she and Luis are getting married and that they will all be moving to a new casa, Juana is quite distraught. Lucky for her, though, some things will never change — like how much Mami loves her.”–Amazon.com.

“When Suzette comes home to Los Angeles from her boarding school in New England, she isn’t sure if she’ll ever want to go back. L.A. is where her friends and family are (as well as her crush, Emil). And her stepbrother, Lionel, who has been diagnosed with bipolar disorder, needs her emotional support. But as she settles into her old life, Suzette finds herself falling for someone new…the same girl her brother is in love with. When Lionel’s disorder spirals out of control, Suzette is forced to confront her past mistakes and find a way to help her brother before he hurts himself–or worse.” — From publisher’s website.

If I Was Your Girl by Meredith Russo

“Amanda Hardy is the new girl in school. Like anyone else, all she wants is to make friends and fit in. But Amanda is keeping a secret, and she’s determined not to get too close to anyone. But when she meets sweet, easygoing Grant, Amanda can’t help but start to let him into her life. As they spend more time together, she realizes just how much she is losing by guarding her heart. She finds herself yearning to share with Grant everything about herself, including her past. But Amanda’s terrified that once she tells him the truth, he won’t be able to see past it” — Provided by publisher.