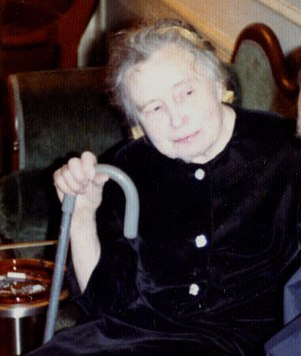 Your invitation for tea on Thursday, December 17th raises the happiest of anticipations.  I’ll surely be right there at three o’clock.  Thank you and thank you again.  Yours truly, Elizabeth Winslow

Ola Elizabeth Winslow was an author and historian best known for her Pulitzer Prize winning biography of the eighteenth-century theologian Jonathan Edwards.  A proprietor of the Boston Athenæum from 1951 until her death in 1977, she is still fondly remembered by Athenæum members and staff alike.

Born in Grant City, Missouri, to William Delos Winslow, a banker, and Hattie Elizabeth Colby, Winslow grew up in California.   She attended Stanford University, earning a bachelor’s degree in 1906 and going on to teach English at a private girls’ school.  In 1909 Winslow accepted a position teaching English at the College of the Pacific (now University of the Pacific), then located in San Jose.  After completing a master’s degree from Stanford in 1914, Winslow became Professor of English at Goucher College, in Baltimore.  She taught at Goucher for the next thirty years, during which time she completed a doctorate in English from the University of Chicago.  Her 1922 dissertation was titled “Low Comedy as Structural Element in English Drama from the Beginnings to 1642” and was published by the University of Chicago Libraries in 1926.

Winslow’s next book was an anthology titled Harper’s Literary Museum:  A Compendium of Instructive, Entertaining and Amusing Matter Selected from Early American Writings…(1927).  Whereas the title page of this book reads “designed” by George Boas and “compiled” by Ola Elizabeth Winslow, it should be understood that Boas, a philosophy professor at Johns Hopkins, did little more than act as Winslow’s literary agent.  Though Winslow’s early work is today consigned to obscurity, her next book was an immediate success, providing the basis for her long and distinguished career.  Winslow had long aspired to write an intellectual history of Jonathan Edwards, but, upon learning that Harvard professor Perry Miller was himself at work on a similar endeavor, Winslow yielded the topic to the better known Miller and wrote a biography of Edwards instead.   Published in 1940, Jonathan Edwards, 1703-1758:  A Biography was awarded the Pulitzer Prize in biography, securing her reputation as an assiduous scholar and gifted writer.

In 1944 Winslow was appointed professor of English at Wellesley College, where she would teach until 1950, residing in faculty housing near campus.  The move represented a kind of homecoming for Winslow, her west-coast upbringing notwithstanding, for her ancestry dates back to the Mayflower, and as a specialist in colonial New England she had long felt an affinity for the region.  From 1950 to 1962 Winslow was lecturer at Radcliffe College’s winter seminars, the seasonal employment permitting her to spend time in London conducting research at the British Museum for her study of Pilgrim’s Progress author John Bunyan.  Published in 1961, John Bunyan, was a finalist for the National Book Award.

Now writing full-time, the ensuing years were the most prolific period of Winslow’s career, owing to her indomitable work ethic and, just perhaps, the writer’s sanctuary she found on the fifth floor of the Boston Athenæum, of which she had been a share-holder since 1951.  By the 1960s Winslow had become one of the better known habitués of the library, her presence well documented in the Athenæum archives.  She now spent most of her time in Maine however, having bought a farmhouse in Sheepscot with her Pulitzer Prize earnings.  She returned to Boston each November to spend the winter near her favorite library, renting a modest apartment at 4 Chestnut Street.

In the winter of 1970 Winslow befriended fellow author and Athenaeum member Edward Clark, professor of English at Suffolk University.  Clark has written up his recollections of his friendship with Winslow in a brief, unpublished memoir titled An Athenæum Friendship, which has served as primary source for the present biographical sketch.  Clark recounts how his pleasant conversations with Winslow evolved into “a daily ritual,” involving collegial discussion and clandestine doughnuts. Clark’s memoir relates many details of Winslow’s winters in Boston, including the particulars of her weekly routine.  On Saturdays she ran errands and shopped and on Sundays attended the First Unitarian Church on Marlborough Street.  On Monday morning she was at the Athenæum as soon as the doors were open, promptly claiming a table on the fifth floor where she wrote until noon.  For lunch she favored tea and an egg-salad sandwich at a neighborhood shop.  She would buy a plain doughnut to share with Mr. Clark, whom she now called Ed, he in turn addressing her as Elizabeth.  When Edward Clark met Winslow she was working on a book on the Boston small pox epidemic of 1721.  It would be her final work.  Published in 1974, A Destroying Angel: The Conquest of Smallpox in Colonial Bostonwas dedicated to Dr. Blake Cady, who had operated on her following a diagnosis with breast cancer.  While Winslow ultimately survived cancer she was nonetheless near the end of her long life.  In 1977 Winslow, who never married and had no children, died in Damariscotta, Maine.  Reflecting on her Athenaeum friendship with Edward Clark, she included him in her will, leaving him “my small antique walnut table, my large square carpeted stool, and one floor lamp, and also my share in the Boston Library Society (now the Boston Athenæum).”