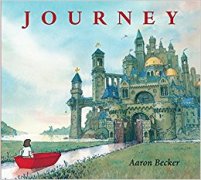 In this first book of a planned trilogy, a lonely young girl, using a red marker, draws a door on her bedroom wall and through it enters another world, where she experiences many adventures, including being captured by an evil emperor.

The sudden and magical appearance of a king startles two friends in a city park. The king pushes a map and some strange objects at them, but before he can explain, the king is captured by hostile forces and whisked back into his enchanted world. Just like that, the two friends are caught up in a mad dash to rescue the mysterious monarch. They embark on a quest to unlock the puzzle of the map and, they hope, save the king and his people from darkness.

“Welcome the much-anticipated finale of Caldecott Honoree Aaron Becker’s wordless trilogy—a spectacular, emotionally satisfying story that brings its adventurer home. Failing to get the attention of her busy father, a lonely girl turns back to a fantastic world for friendship and adventure. It’s her third journey into the enticing realm of kings and emperors, castles and canals, exotic creatures and enchanting landscapes. This time, it will take something truly powerful to persuade her to return home, as a gripping backstory is revealed that will hold readers in its thrall. Caldecott Honor winner Aaron Becker delivers a suspenseful and moving climax to his wordless trilogy, an epic that began with the award-winning Journey and continued with the celebrated follow-up Quest.” — Provided by publisher.

The Trolley to Yesterday by John Bellairs

Johnny Dixon and Professor Childermass discover a trolley which transports them back to Constantinople in 1453 as the Turks are invading the Byzantine Empire.

An Angel for May by Melvin Burgess

Faced with his parents’ divorce, Tam is unhappy, but when he’s given a way out, will he take it? Even if it means being stuck in the past forever?

The Reluctant Assassin by Eoin Colfer

In Victorian London, Albert Garrick, an assassin-for-hire, and his reluctant young apprentice, Riley, are transported via wormhole to modern London, where Riley teams up with a young FBI agent to stop Garrick from returning to his own time and using his newly acquired scientific knowledge and power to change the world forever.

The Mirror of Fire and Dreaming by Chitra Banerjee Divakaruni

As twelve-year-old Anand continues his studies to become a full-fledged member of The Brotherhood of the Conch, he journeys back to Mogul times, where he encounters powerful sorcerers, spoiled princes, noble warriors, and evil jinns.

When a thirteenth-century wizard confronts twenty-first century Boston while seeking his pet dragon, he is followed by a rival wizard and a very unhappy demon, but eleven-year-old Theodora Oglethorpe may hold the secret to setting everything right.

Inkheart Cornelia Funke; translated from the German by Anthea Bell

Twelve-year-old Meggie learns that her father, who repairs and binds books for a living, can “read” fictional characters to life when one of those characters abducts them and tries to force him into service.

Looking for excitement, Coraline ventures through a mysterious door into a world that is similar, yet disturbingly different from her own, where she must challenge a gruesome entity in order to save herself, her parents, and the souls of three others.

The Phantom Tollbooth by Norton Juster; illustrated by Jules Feiffer

A journey through a land where Milo learns the importance of words and numbers provides a cure for his boredom.

Three brothers and a sister take the responsibility of possession of a length of iron railing, a keystone, two pieces of wood, and a cracked cup which symbolize the power of a spear, a sword, a stone, and a cauldron to generate light for the Kingdom of Elidor

A Wrinkle in Time by Madeleine L’Engle

The Lion, the Witch, and the Wardrobe by C. S. Lewis

Four English school children find their way through the back of a wardrobe into the magic land of Narnia and assist Aslan, the golden lion, to triumph over the White Witch who has cursed the land with eternal winter.

Bridge to Terabithia by Katherine Paterson; illustrated by Donna Diamond

The life of a ten-year-old boy in rural Virginia expands when he becomes friends with a newcomer who subsequently meets an untimely death trying to reach their hideaway, Terabithia, during a storm.

Young Arthur Mumby, his sister Myrtle, and their mother accept an invitation to take a holiday at an up-and-coming resort in the asteroid belt, where they become involved in a dastardly plot involving spies, time travel, and mind-altering clothing.

The Girl Who Circumnavigated Fairyland in a Ship of Her Own Making by Catherynne M. Valente; with illustrations by Ana Juan

Twelve-year-old September’s ordinary life in Omaha turns to adventure when a Green Wind takes her to Fairyland to retrieve a talisman the new and fickle Marquess wants from the enchanted woods.

Eleven-year-old Silver sets out to find the Timekeeper—a clock that controls time—and to protect it from falling into the hands of two people who want to use the device for their own nefarious ends.

The Wizard of Oz by L. Frank Baum

Seventh-grader Martin Conway believes that his life is monotonous and dull until the night the antique radio he uses as a night-light transports him to the bombing of London in 1940.

“Katie Lennox wishes her parents were still alive. Having to leave Boston to live with Grandma Cleaves in London was hard, but she’s making new friends, working on her British accent and even learning some Cockney rhyming slang. London’s cool and actually feels like home in some ways, like she’s been here before, belongs here. When a museum visit with her cousin and his cute friend turns funky, Katie finds herself in a long, uncomfortable dress, wearing a ridiculous hat, wondering what happened to her jeans and high-top sneakers? And where’s her iPhone?… It’s London, 1888. Smart and gutsy, Katie knows she’s here to stop Jack the Ripper. The serial killer didn’t just slash his victims’ throats; he butchered the women. Katie has read about the Ripper, knows the names of his victims and where and when they were killed. She’s watched her fair share of CSI. Can Katie save their lives?”—from Amazon.com.

When his father disappears while experimenting with a black mirror that is a portal to both the past and the future, Jake encounters obstacles when he tries to use the mirror to find his father.

Half World by Hiromi Goto; illustrated by Jillian Tamaki

“Melanie Tamaki is an outsider. She is unpopular at school. At home, where she and her loving but neglectful mother live in poverty, she has had to learn to take care of herself. Melanie is just barely coping. Everything changes on the day she returns home to find her mother is missing, lured back to

Half World by a nightmare creature calling himself Mr. Glues kin. Soon Melanie has embarked on an epic and darkly fantastical journey to Half World to save her mother. What she does not yet realize is that the state of the universe is at stake…” —P. [4] of cover.

When thirteen-year-olds Jonah and Chip, who are both adopted, learn they were discovered on a plane that appeared out of nowhere, full of babies with no adults on board, they realize that they have uncovered a mystery involving time travel and two opposing forces, each trying to repair the fabric of time.