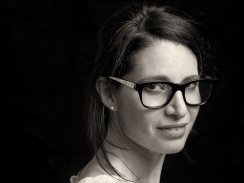 Rachel Slade is an accomplished journalist and author. She started her career as an architect in Boston before becoming an editor and writer. After working as an editor at Boston magazine for ten years, she published her first book, Into the Raging Sea: Thirty-Three Mariners, One Megastorm, and the Sinking of El Faro, which was named a New York Times Notable Book and an NPR Best Book, and won the Mountbatten Award for Best Book. Slade and I spoke over Zoom in early February about her career as a journalist and about her upcoming book, American Hoodie. To learn more about Slade and explore some of her work, please visit her website.

Our conversation has been edited for clarity and brevity.

Q: Can you tell me about your background, both personal and academic?

RACHEL SLADE: I’m from Philadelphia and after college, I went to the University of Pennsylvania for my Master in Architecture. That was an incredibly intense experience, trying to learn fluency in a new language, the visual language. I worked at a Boston architecture firm doing institutional work. When the firm downsized, which happens in that industry, I decided to try writing about design.

To get writing gigs, I began reaching out to the architecture firms I thought were doing terrific work, asking them if I could trot their best projects in front of editors. In a short time, my byline was popping up in a lot of different places. One day, I got a cold call from Boston magazine. They said, “Would you like to run our home design magazine?” And I thought, ‘I’m an architect. I can do anything.’ Well, it was not easy.

I ended up writing and editing all kinds of stories—politics, crime, real estate—which was a great education. I left Boston in 2016 and immediately felt the panic everybody gets when you leave a full time job, so I started pitching like crazy. One of the first stories I pitched was to Yankee magazine about El Faro, the American container ship that sunk in October 2015. While I was reporting that story, I had a feeling it would become a book. I put together a proposal, published a book, and the book did well. Now I’m working on my second book.

RS:  I can’t tell you when I first heard about the Athenæum but I was under the impression that it was a highly exclusive club. During the pandemic, we all found we needed to find our so-called third space. We have our homes, many of us are fortunate to have a work space or an office somewhere, but the idea of a third space has become increasingly important.

I wanted to be in a place where I could focus all day, and that drove me to the Athenæum. Then I started looking at the bookshelves and could not believe how blessed we are. What a strange collection of stuff!

I love that it’s a community of scholars. Everybody understands that if you sit down with a book or flip open your computer, you’re working. If you stay all day, nobody’s going to give you the side-eye or wonder what you’re up to. It’s a legitimate place to get work done.

Q: Can you tell me how you found the story of El Faro?

RS: When I left Boston, I knew I wanted to write about Maine, so the first thing I did was set up a Maine list on Twitter and begin eavesdropping on all the newspapers and media sources in the state. My feed filled up with car accidents, school board meetings, that sort of thing. One day, I saw a tweet about some Maine families settling with a shipping company for the loss of their loved ones. I clicked on the article and went down the El Faro rabbit hole. I couldn’t believe an enormous American commercial ship had gone down three months before and I hadn’t heard about it.

I was further embarrassed by the fact that I didn’t know anything about maritime culture in the United States. We have ships, but who’s on those ships? How do you learn how to sail a ship? What kinds of people go into this industry? Turns out, there’s a huge maritime community in Maine.

A lot of people in this region have gone to Maine Maritime Academy or Massachusetts Maritime Academy and are making a fine living on ships sailing around the world, just as so many others have done over the centuries. Of course, the ships have changed. The things on the ships have changed. The way we pack ships has changed. Where we go has changed. But the idea that you can lose somebody at sea has not changed.

I was obsessed with finding out what happened to El Faro. Why did it sail into a hurricane when they had all the modern weather prediction and communication tools aboard? I also wanted to learn our maritime history, and how we’d lost our connection to the sea.

When the book came out in 2018, I did a lot of speaking around New England, Philadelphia, and New York. I would talk about how we think we’re connected by the internet but that’s only partially true. Ships connect us globally. If the internet went down, we would feel it less acutely than if global shipping broke down.

Now, in 2022, I don’t have to preach anymore because shipping and the supply chain are top of mind. We see empty spaces on store shelves, we’re having trouble manufacturing cars and all kinds of things due to supply chain issues. The huge backups in Long Beach, California, are now on the front page of the New York Times.

Q: What were the challenges and joys of conducting and using interviews for Into the Raging Sea?

RS:  That was the most difficult reporting I had ever done. Not only had people lost family members, but some of the family members were very young. When you lose somebody at sea, there is no closure. There is no body. You cannot say goodbye fully and wholly the way we humans need to. It was very painful.

It’s always a gift when somebody is willing to talk to you and entrust their story to you. I learned that people were willing to do that with me. That was one of the joys. That also meant I had a tremendous responsibility to tell the story right, which is why the hardest moment was sending out copies of the book to those same family members. If they didn’t feel that I had been honest or fair, it would have been devastating. The stakes were so very high. Fortunately I got some lovely messages back from folks and I continue to get messages from mariners around the world saying they felt the story was well told.

In fact, I wrote about a third of the book on a ship. I took a cargo ship from Italy to Baltimore, Maryland—a 12 day voyage. I wrote from the bridge looking out at the Atlantic, observing the captain, the mates, and the helmsmen going about their days. I cannot think of a better way to write a book about a cargo ship than on a cargo ship.

Q: Can you tell me more about the book you are currently working on?

RS: The book is called American Hoodie. It explores the political, economic, and social history of textile manufacturing in America. The book asks, ‘Can we make things in America in the twenty-first century? Is it even possible anymore?’

Q: What do you hope readers will take away from American Hoodie?

RS: I want people to understand the value of things. We have a tendency to go to the store and quickly flip through racks and piles of things. This object right here [Slade holds up a small gray bag with a zippered top]—think about the technology required to make this fabric and the ingenuity it took to create a zipper. Think about the craftsmanship it takes to design a sewing machine that will do all of that in a fraction of a second. There are millennia of information and human intelligence packed into this object. It is an incredible thing. And that’s true with all the objects we interact with every day. We’ve forgotten that. We’ve lost touch with that meaning because stuff is so cheap. The price we currently pay for things does not reflect their value. I hope that through this book, readers will share the marvel that I have of what it takes to create the things we often take for granted.

Q: Did the Athenæum’s collections assist your research?

RS:  There is an incredible wealth of information in the Athenæum about the textile industry and I asked Curator Ginny Badgett to help me. She found this crazy little pamphlet published in Boston in 1765, written to address the growing number of homeless women and orphans living on Boston’s streets. In ornate prose, the pamphlet proposed that these women and orphans start manufacturing linen, because there was a need for it. There was little textile industry in America during the colonial period—nearly everything came from England. England was rapidly industrializing and the textiles coming to America were cheap and of high quality. Just before the American Revolution, people were starting to think, ‘Maybe we should have a textile industry here.’ It was not until after the revolution that it became a necessity.

While working on this book, I’ve stumbled onto some really wonderful stuff that I’ve been able to work into the book. In the Portsmouth, New Hampshire section on the fifth floor, I found the log of a cargo ship that came from England in 1635. So, what did England think the settlers in Portsmouth needed? Well, here’s the entire tally of everything that was on that ship—just sitting there on a shelf!

The Athenæum is a cabinet of wonders. It’s a unique, wacky, and wild collection of things that people over the past 200 years thought might be valuable to keep around. That makes it quirky and fun to explore.

Q: Do you have a favorite spot to do work at the Athenæum?

RS: Like a Maine lobsterman, I’m not telling you!

RS: I do like to say that working for an hour on the fifth floor is like working five hours anywhere else. American Hoodie would not be what it is without the time I have spent at the Athenæum writing it. The Athenæum has a deep respect for objects. There is such faith in the printed word. Being in this space gives me the courage to believe that what I am doing has value.