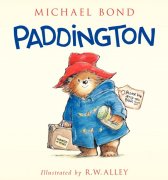 A retelling of the German folktale in which a beautiful girl with long golden hair is kept imprisoned in a lonely tower by a witch.

“Over fifty years ago, a small bear set out on the adventure of a lifetime. With nothing but a suitcase, several jars of marmalade, and a label around his neck that read, “Please look after this bear. Thank you,” he crossed the ocean heading for England. When he arrived at London’s busy Paddington Station, he was discovered by Mr. and Mrs. Brown. As luck would have it, the Browns were just the sort of people to welcome a lost bear into their family—and their lives would never be the same.” —From publisher’s website.

This collection includes six classic stories that were originally published beginning in 1963. Also included is an original letter from Norman Bridwell to the reader, information about the creation of Clifford—including an image of Norman’s 1962 painting that inspired the Clifford series—and the story behind the real Emily Elizabeth.

The Complete Adventures of Peter Rabbit by Beatrix Potter

A collection of four stories relating all the adventures of Peter Rabbit and his mischievous cousin, Benjamin Bunny.

The first adventure in this highly popular series tells how the little monkey Curious George, caught in the jungle and brought back to the city by a man in a yellow hat, can’t help being interested in all the new things around him. Though well meaning, George’s curiosity always gets him into trouble.

Where the Wild Things Are by Maurice Sendak

A naughty little boy, sent to bed without his supper, sails to the land of the wild things where he becomes their king.

The Cat in the Hat by Dr. Seuss

Poor Sally and her brother. It’s cold and wet and they’re stuck in the house with nothing to do . . . until a giant cat in a hat shows up, transforming the dull day into a madcap adventure and almost wrecking the place in the process!

Left on their own for an afternoon, two bored and restless children find more excitement than they bargained for in a mysterious and mystical jungle adventure board game.

Alexander and the Terrible, Horrible, No Good, Very Bad Day by Judith Viorst

Recounts the events of a day when everything goes wrong for Alexander.

The Black Cauldron by Lloyd Alexander

Taran, Assistant Pig-Keeper of Prydain, faces even more dangers as he seeks the magical Black Cauldron, the chief implement of the evil powers of Arawn, lord of the Land of Death.

The House with a Clock in its Walls by John Bellairs

A boy goes to live with his magician uncle in a mansion that has a clock hidden in the walls which is ticking off the minutes until doomsday.

Because of Winn-Dixie by Kate Dicamillo

Ten-year-old India Opal Buloni describes her first summer in the town of Naomi, Florida, and all the good things that happen to her because of her big ugly dog Winn-Dixie.

The Neverending Story by Michael Ende

The story begins with a lonely boy named Bastian and the strange book that draws him into the beautiful but doomed world of Fantastica. Only a human can save this enchanted place by giving its ruler, the Childlike Empress, a new name. But the journey to her tower leads through lands of dragons, giants, monsters, and magic and once Bastian begins his quest, he may never return. As he is drawn deeper into Fantastica, he must find the courage to face unspeakable foes and the mysteries of his own heart.

Harriet the Spy by Louise Fitzhugh

Eleven-year-old Harriet keeps notes on her classmates and neighbors in a secret notebook, but when some of the students read the notebook, they seek revenge.

Looking for excitement, Coraline ventures through a mysterious door into a world that is similar, yet disturbingly different from her own, where she must challenge a gruesome entity in order to save herself, her parents, and the souls of three others.

The Borrowers by Mary Norton

Miniature people who live in an old country house by borrowing things from the humans are forced to emigrate from their home under the clock.

The Lightning Thief by Rick Riordan

Twelve-year-old Percy Jackson learns he is a demigod, the son of a mortal woman and Poseidon, god of the sea. His mother sends him to a summer camp for demigods where he and his new friends set out on a quest to prevent a war between the gods.

Harry Potter and the Sorcerer’s Stone by J.K. Rowling

Rescued from the outrageous neglect of his aunt and uncle, a young boy with a great destiny proves his worth while attending Hogwarts School for Wizards and Witches.

As further evidence of his family’s bad fortune which they attribute to a curse on a distant relative, Stanley Yelnats is sent to a hellish correctional camp in the Texas desert where he finds his first real friend, a treasure, and a new sense of himself.

The Invention of Hugo Cabret by Brian Selznick

When twelve-year-old Hugo, an orphan living and repairing clocks within the walls of a Paris train station in 1931, meets a mysterious toyseller and his goddaughter, his undercover life and his biggest secret are jeopardized.

The Hundred and One Dalmations by Dodie Smith

“Famously adapted by Walt Disney in 1961, Dodie Smith’s classic tale of a great dog robbery was inspired when a friend idly remarked that Smith’s own Dalmatian, also called Pongo, would make a lovely fur coat. While the film may have captured the spirit of the story, it lacks the style and moments of charm and humour that can only be found in Smith’s inventive novel: the vivacious antics of Nanny Cook and Nanny Butler, the reason why Cruella, as one feisty pup discovers, tastes of pepper, and the mystery behind the identity of the hundred and oneth Dalmatian.” —Provided by publisher.

The Bad Beginning by Lemony Snicket

After the sudden death of their parents, the three Baudelaire children must depend on each other and their wits when it turns out that the distant relative who is appointed their guardian is determined to use any means necessary to get their fortune.

An extraordinary English nanny blows in on the East Wind with her parrot-headed umbrella and magic carpetbag and introduces her charges, Jane and Michael, to some delightful people and experiences.

Some Pig. Humble. Radiant. These are the words in Charlotte’s Web, high up in Zuckerman’s barn. Charlotte’s spiderweb tells of her feelings for a little pig named Wilbur, who simply wants a friend. They also express the love of a girl named Fern, who saved Wilbur’s life when he was born the runt of his litter.

Simon vs. the Homo Sapiens Agenda by Becky Albertalli

“Sixteen-year-old, not-so-openly-gay Simon Spier is blackmailed into playing wingman for his classmate or else his sexual identity—and that of his pen pal—will be revealed.” —Provided by publisher.

The Sisterhood of the Traveling Pants by Ann Brashares

During their first summer apart, four teenage girls, best friends since earliest childhood, stay in touch through a shared pair of secondhand jeans that magically adapts to each of their figures and affects their attitudes to their different summer experiences.

The Hunger Games by Suzanne Collins

In a future North America, where the rulers of Panem maintain control through an annual televised survival competition pitting young people from each of the twelve districts against one another, sixteen-year-old Katniss’s skills are put to the test when she voluntarily takes her younger sister’s place.

The Miseducation of Cameron Post by Emily M. Danforth

In the early 1990s, when gay teenager Cameron Post rebels against her conservative Montana ranch town and her family decides she needs to change her ways, she is sent to a gay conversion therapy center.

The Fault in Our Stars by John Green

Sixteen-year-old Hazel, a stage IV thyroid cancer patient, has accepted her terminal diagnosis until a chance meeting with a boy at cancer support group forces her to reexamine her perspective on love, loss, and life.

Every Day by David Levithan

“Self-proclaimed fat girl Willowdean Dickson (dubbed “Dumplin” by her former beauty queen mom) has always been at home in her own skin. Her thoughts on having the ultimate bikini body? Put a bikini on your body. With her all-American beauty best friend, Ellen, by her side, things have always worked… until Will takes a job at Harpy’s, the local fast-food joint. There she meets Private School Bo, a hot former jock. Will isn’t surprised to find herself attracted to Bo. But she is surprised when he seems to like her back. Instead of finding new heights of self-assurance in her relationship with Bo, Will starts to doubt herself. So she sets out to take back her confidence by doing the most horrifying thing she can imagine: entering the Miss Clover City beauty pageant—along with several other unlikely candidates—to show the world that she deserves to be up there as much as any twiggy girl does. Along the way, she’ll shock the hell out of Clover City—and maybe herself most of all.” —Description from book jacket.

In a future Chicago, sixteen-year-old Beatrice Prior must choose among five predetermined factions to define her identity for the rest of her life, a decision made more difficult when she discovers that she is an anomoly who does not fit into any one group, and that the society she lives in is not perfect after all.

The Hate U Give by Angie Thomas

“Sixteen-year-old Starr Carter moves between two worlds: the poor neighborhood where she lives and the fancy suburban prep school she attends. The uneasy balance between these worlds is shattered when Starr witnesses the fatal shooting of her childhood best friend Khalil at the hands of a police officer. Khalil was unarmed. Soon afterward, his death is a national headline. Some are calling him a thug, maybe even a drug dealer and a gangbanger. Protesters are taking to the streets in Khalil’s name. Some cops and the local drug lord try to intimidate Starr and her family. What everyone wants to know is: what really went down that night? And the only person alive who can answer that is Starr. But what Starr does or does not say could upend her community. It could also endanger her life.” — Provided by publisher.

The Book Thief by Markus Zusak

Trying to make sense of the horrors of World War II, Death relates the story of Liesel—a young German girl whose book-stealing and story-telling talents help sustain her family and the Jewish man they are hiding, as well as their neighbors.