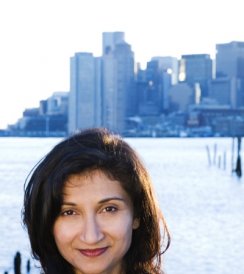 Rishi Reddi was born in Hyderabad, India to “adventurous” parents.  Her father was a physician and his work brought the family across the globe.   As a young girl, they moved to London, Los Angeles, Philadelphia, and many more places in between.  Feeling unsettled by the continual uprooting, particularly as an only child, Reddi remembers turning to books for comfort and calm.  Her mother encouraged her reading and also gave her a notebook where she wrote her first story.  (She vaguely remembers something about a princess and a fairy and a cave).  Works such as The Phantom Tollbooth, My Friend Flicka and The Outsiders were read and re-read.  She also enjoyed Greek and Norse mythology, as well as the legends of gods and goddesses from her Hindu upbringing.  By the time she was in high school in Wichita, KS, literature was clearly her preferred subject.

Despite her parents’ strong urging to enter medical school, in 1988, Reddi graduated from Swarthmore College with a degree in English. She decided to study law and earned a JD at Northeastern University.  But her creative writing impulse would not be vanquished. She later enrolled in Boston University’s Creative Writing program and in many other workshops, such as courses at Boston’s Grub Street creative writing center, extension school classes at Harvard, and an independent study at MIT.

Reddi continues to practice law to this day.  Indeed, many of the unusual cases she studied in law school serve as inspiration for her writing.  Brij Sharma’s 2001 suit against McDonald’s for allegedly putting beef fat in vegetarian French fries sparked “Justice Shiva Ram Murthy.” This title was included in The Best American Short Stories of 2011, edited by Michael Chabon, and broadcast on NPR’s “Selected Stories.”  The continued legal battles of the Fatal Light Awareness Program (FLAP) in Toronto to save the lives of migrating birds gave her the idea for “Karma.”  Similarly, the interracial marriage and citizenship cases of the early twentieth century provide the backdrop for Reddi’s forthcoming novel, West, set in the Imperial Valley of California.

In Karma and other Stories, which won the PEN New England / L.L. Winship Award for Fiction in 2008, we intimately peer into the lives of Indian-American families.  We meet characters from many generations who are at various levels of comfort and reconciliation with their conservative upbringing and the temptations of American culture.  Reddi states that the relationships she created between these Boston and Lexington Indian-American communities were a way for her to imagine the community she never had growing up—a way  to artistically contend with the disappointment of having felt both different and alone for so many years.

Reddi joined the Boston Athenæum in 2003 at the recommendation of former archivist and friend, Lisa Starzyk.  She wrote much of Karma while sitting in the fifth floor reading room, and enjoyed meeting other authors in the Spiro Members’ Lounge.  The library was also a place where she could turn to Mark Twain, Toni Morrison and Edward P. Jones whenever in need of inspiration.

Reddi will be reading from her collection Karma and Other Stories on February 21st, from 6:30-9:30p.m. at the Peabody Essex Museum, where, in conjunction with the Tannery Authors Series, the Atrium will be transformed into the famous Samovar Café.