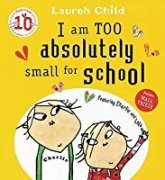 David’s activities in school include chewing gum, talking out of turn, and engaging in a food fight, causing his teacher to say over and over, “No, David!”

I Am Absolutely Too Small for School by Lauren Child

When Lola is worried about starting school, her older brother Charlie reassures her.

Back to School for Rotten Ralph by Jack Gantos; illustrated by Nicole Rubel

Afraid of being left alone, Rotten Ralph, the nasty red cat, follows Sarah to school and tries to prevent her from making new friends.

A mouse named Wemberly, who worries about everything, finds that she has a whole list of things to worry about when she faces the first day of nursery school.

Little Penguin, who has the “soul of an eagle,” enrolls in flight school.

“It’s the first day of school at Frederick Douglass Elementary and everyone’s just a little bit nervous, especially the school itself.” —Provided by publisher.

Miss Bindergarten Gets Ready for Kindergarten by Joseph Slate; illustrated by Ashley Wolff

Introduces the letters of the alphabet as Miss Bindergarten and her students get ready for kindergarten.

Ming goes to preschool, where she bravely plays all kinds of games with new friends and old, but she is still not quite ready for the big red slide.

Starting with number one for the first day of school, Emily learns the numbers to one hundred in many different ways.

Despite the doubts of some classmates and her native-born Japanese mother’s inability to read English, Yoko finds the key to reading and catches up with the other students in putting new leaves on the classroom’s book tree.

“In this middle grade novel-in-verse by the Newbery Medal-winning and Coretta Scott King Honor Award-winning author of The Crossover, soccer, family, love, and friendship, take center stage as twelve-year-old Nick learns the power of words as he wrestles with problems at home, stands up to a bully, and tries to impress the girl of his dreams.” —Provided by publisher.

When he decides to turn his fifth grade teacher’s love of the dictionary around on her, clever Nick Allen invents a new word and begins a chain of events that quickly moves beyond his control.

The School for Good and Evil by Soman Chainani

Best friends Sophie (princess wannabe) and Agatha (witchy loner) are headed (via kidnapping) to the School for Good and Evil, but their assumed destinies are reversed.

“When people look at George, they think they see a boy. But she knows she’s not a boy. She knows she’s a girl. George thinks she’ll have to keep this a secret forever. Then her teacher announces that their class play is going to be Charlotte’s Web. George really, really, REALLY wants to play Charlotte. But the teacher says she can’t even try out for the part . . . because she’s a boy. With the help of her best friend, Kelly, George comes up with a plan. Not just so she can be Charlotte — but so everyone can know who she is, once and for all.” —Provided by publisher.

Clara Lee and the Apple Pie Dream by Jenny Han

Korean American fourth-grader Clara Lee longs to be Little Miss Apple Pie, and when her luck seems suddenly to change for the better, she overcomes her fear of public speaking and enters the competition.

“A Pakistani-American Muslim girl struggles to stay true to her family’s vibrant culture while simultaneously blending in at school after tragedy strikes her community.” —Provided by publisher.

Bridge is an accident survivor who’s wondering why she’s still alive. Emily has new curves and an almost-boyfriend who wants a certain kind of picture. Tabitha sees through everybody’s games—or so she tells the world. The three girls are best friends with one rule: No fighting. Can it get them through seventh grade?… This year everything is different for Sherm Russo as he gets to know Bridge Barsamian. What does it mean to fall for a girl—as a friend?… On Valentine’s Day, an unnamed high school girl struggles with a betrayal. How long can she hide in plain sight?

The Disreputable History of Frankie Landau-Banks by E. Lockhart

Sophomore Frankie starts dating senior Matthew Livingston, but when he refuses to talk about the all-male secret society that he and his friends belong to, Frankie infiltrates the society in order to enliven their mediocre pranks.

Lucy and Linh by Alice Pung

“Lucy is a bit of a pushover, but she’s ambitious and smart, and she has just received the opportunity of a lifetime: a scholarship to a prestigious school, and a ticket out of her broken-down suburb. Though she’s worried she will stick out like badly cut bangs among the razor-straight students, she is soon welcomed into the Cabinet, the supremely popular trio who wield influence over classmates and teachers alike. Linh is blunt, strong-willed, and fearless—everything Lucy once loved about herself. She is also Lucy’s last solid link to her life before private school, but she is growing tired of being eclipsed by the glamour of the Cabinet. As Lucy floats further away from the world she once knew, her connection to Linh—and to her old life—threatens to snap. Sharp and honest, Alice Pung’s novel examines what it means to grow into the person you want to be without leaving yourself behind.” — Provided by publisher

Considers the landmark case that dealt with the rights of students to wear arm bands to protest U.S. involvement in the Vietnam War.

The Forbidden Schoolhouse: The True and Dramatic Story of Prudence Crandall and Her Students by Suzanne Jurmain

The story of Prudence Crandall’s school for African American girls, told in verse.

In a series of poems, eleven-year-old Lonnie writes about his life, after the death of his parents, separated from his younger sister, living in a foster home, and finding his poetic voice at school.