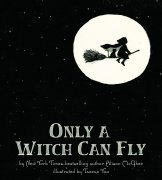 When Wittilda the witch is forced to look for a job, she finds her broom-flying ability comes in handy in applying for a job delivering pizzas.

Corduroy’s Halloween by B. G. Hennessy illustrated by Lisa McCue

The latest adventure of the adorable bear created by Don Freeman as he chooses a Halloween costume, joins a window-painting contest, goes trick-or-treating, and bobs for apples.

A young girl wants to fly like a witch on a broom, and one special night, through enormous effort and with the help of her brother, her black cat, and an owl, she fulfills her dream.

When a witch loses her magic walking stick, which has been used over the years to grant hundreds of miserable wishes, she tricks a young girl into finding and returning it, with unexpected results.

Scared you! This little mouse thinks he’s the bravest animal around, but it seems that he’s not the only one … All the animals are keen to show off their bravery from the crocodile with his mighty jaws, to the tiger with her scary claws! But who will be the bravest of them all?

A scary skeleton terrorizes a boy in his bedroom while it searches his closet for clothes to wear.

Can You See What I See? On a Scary Scary Night by Walter Wick

A little old lady who is not afraid of anything must deal with a pumpkin head, a tall black hat, and other spooky objects that follow her through the dark woods trying to scare her.

James Lee and Uncle Big Anthony become victims of Wee Winnie Witch, who takes them on a ride up into the sky, but Mama Granny saves them.

When Prewitt’s shamefully scraggly tail develops the appearance of a scary greeneyed monster, the other peacocks decide it has to go.

Cobweb the cat and her best friends, who are mice, save the spooky Black Cat Bookstore from a burglar who says he doesn’t believe in ghosts.

After choosing a new dog, Ben describes what the pet Aggie can do and should not do around the house.

Henry worries about what will happen to his big dog Mudge during their visit to his grandmother’s house in the country.

In the autumn Henry and his big dog Mudge watch the leaves turn, meet with some Halloween spooks and share Thanksgiving dinner

The Girl Who Drank the Moon by Kelly Barnhill

“An epic fantasy about a young girl raised by a witch, a swamp monster, and a Perfectly Tiny Dragon, who must unlock the powerful magic buried deep inside her.” —Provided by publisher

The House with a Clock in its Walls by John Bellairs

A boy goes to live with his magician uncle in a mansion that has a clock hidden in the walls which is ticking off the minutes until doomsday.

When a twelve-year-old evil genius tries to restore his family fortune by capturing a fairy and demanding a ransom in gold, the fairies fight back with magic, technology, and a particularly nasty troll.

Dragons in a Bag by Zetta Elliott

In Brooklyn, nine-year-old Jax joins Ma, a curmudgeonly witch who lives in his building, on a quest to deliver three baby dragons to a magical world, and along the way discovers his true calling.

The Sleeper and the Spindle by Neil Gaiman

“You may think you know this story. There’s a young queen, about to be married. There are some good, brave, hardy dwarves; a castle, shrouded in thorns; and a princess, cursed by a witch, so rumour has it, to sleep forever. But no one is waiting for a noble prince to appear on his trusty steed here. This fairy tale is spun with a thread of dark magic, which twists and turns and glints and shined. A queen might just prove herself a hero, if a princess needs rescuing…” —Provided by publisher

“Thorn, a boy sold into slavery who must serve the royalty of Castle Gloom for a year and a day to earn his freedom, and Lilith Shadow, the 13-year-old ruler of Gehenna, who is forbidden to practice the magic that is her heritage, join forces to solve the murders taking place in Gehenna.” —Provided by publisher

The Darkest Part of the Forest by Holly Black

“In the town of Fairfold, where humans and fae exist side by side, a boy with horns on his head and ears as pointed as knives awakes after generations of sleep in a glass coffin in the woods, causing Hazel to be swept up in new love, shift her loyalties, feel the fresh sting of betrayal, and make a secret sacrifice to the faerie king.” —Provided by publisher

Half World by Hiromi Goto

“Melanie Tamaki is an outsider. She is unpopular at school. At home, where she and her loving but neglectful mother live in poverty, she has had to learn to take care of herself. Melanie is just barely coping. Everything changes on the day she returns home to find her mother is missing, lured back to Half World by a nightmare creature calling himself Mr. Glueskin. Soon Melanie has embarked on an epic and darkly fantastical journey to Half World to save her mother. What she does not yet realize is that the state of the universe is at stake…” —Provided by publisher

The Minister’s Daughter by Julie Hearn

In 1645 in England, the daughters of the town minister successfully accuse a local healer and her granddaughter of witchcraft to conceal an out-of-wedlock pregnancy, but years later during the 1692 Salem trials their lie has unexpected repercussions.

In 1905 czarist Russia, an impoverished country girl Elena and the aristocratic Ekatrina meet and set in motion an escapade that includes mistaken identity, a monk locked in a tower, a prince traveling incognito, and the witch Baba Yaga.

“Twelve-year-old Sunny lives in Nigeria, but she was born American. Her features are African, but she’s albino. She’s a terrific athlete, but can’t go out into the sun to play soccer. There seems to be no place where she fits in. And then she discovers something amazing–she is a ‘free agent’ with latent magical power. Soon she’s part of a quartet of magic students, studying the visible and invisible, learning to change reality. But will it be enough to help them when they are asked to catch a career criminal who knows magic too?” —Provided by publisher