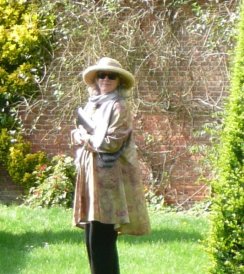 Sukie Amory wears several hats at Amory Architects, where she collaborates with staff on interiors and gardens and blogs on various topics in landscape and design.  She is also a frequent contributor to HORTUS, a British garden journal owned and edited by David Wheeler, whom Amory met in 2007 on a tour of private Belgian gardens.  (You can read the current issue of HORTUS on the second floor).

Amory jokes that hers was perhaps an unlikely upbringing for a garden writer.  As a young child in the 1950s, her family moved from Norfolk, Virginia to Chicago, where her parents threw themselves into the civil rights movement.  She remembers her mother dressing her in her Sunday best to march with Dr. Martin Luther King. Her father, an Episcopal priest, assisted Malcolm X in his lawsuit to allow Korans in jails and established the first halfway house for men coming out of prison.  She remembers him being in jail himself for weeks during the Freedom Rides in Jackson, Mississippi and receiving a Black Panther escort when Chicago burned after Malcolm X’s assassination

Certainly, as a young urban woman, she would never have thought that someday she would be writing about an estate garden in the Ukraine designed by a Polish count for his Greek mistress or lilacs in Duxbury or elm trees and Olmsted.  Nor would she have thought she’d be spending all of her spare time reading up on Persian water features or how to overwinter agapanthus.  Back then, her heart was set on working for a metropolitan opera company.  She studied English and German literature at Harvard/Radcliffe and British theater history at the University of London, eventually working for the Cambridge (UK) Music Festival and the centennial Bayreuth Festival.  Upon returning to Boston, she worked for Sarah Caldwell’s Opera Company and later the Massachusetts Council on the Arts and Humanities.

And yet, something in her mother’s stories of running wild through a white-flowered garden on a farm outside of Richmond, VA must have made an impression.Looking back, Amory finds her memories of visiting relatives in Tidewater Virginia and up in the Blue Ridge Mountains have as much of the feeling of “home” as does the bustle and grit of Chicago.  The setting which was to have the greatest impact on her aesthetically was her paternal grandfather’s shade garden on the Lafayette River in Norfolk, which she describes as having been “a cool haven of magnolias, crabapples, crepe myrtles, loblolly pines, boxwood and ivy.”  It was the perfect spot to muse upon of her favorite line of garden poetry from George Herbert: “Annihilating all that’s made/ To a green thought in a green shade…”

In 1988, Amory and her husband, architect David Amory, established the firm Amory Architects.  They were working on their own particularly ragged fixer upper in Brookline when she happened to attend a lecture at the Arboretum where the speaker declared that, in Britain, even the ugliest council flat could be transformed with a tiny allotment of roses and vines.  Amory went straight to work transforming the Brookline property with a front cottage garden and a rear shade garden inspired by the one kept by her grandfather.  The finished product turned out so well that it was featured on the cover of Globe Magazine and in Outside the Not So Big House.

Amory first walked into the Boston Athenæum in the summer of 1974 where she and other college students spent a sweltering season under the benevolent supervision of former director Rodney Armstrong, checking Cutter call number shelf lists against books in the Drum.  She says they marveled over finds such as an original Martin Luther tract with charge cards and chortled over early catalogue entries like: Women—see Social problems.  Recently, she’s been able to enrich her garden writing with great finds in our rare book collection, such as an early edition of Thomas Whately’s Observations on Modern Gardening, an influential book that Thomas Jefferson had in his pocket when he and John Adams went on a tour of British gardens—around the same time that Catherine the Great was having it translated into Russian.  Images from our collections also appear in her Winter 2010 HORTUS article, “Our Burnished Stomping Ground: The Public Garden, Boston.”

Amory is quick to point out that not all garden writing is about palaces and country estates.  In the Summer of 2010, Amory wrote a piece for HORTUS entitled “The Gift: A WPA Garden in Virginia” about the Azalea Gardens that grew into today’s Norfolk Virginia Botanical Garden and the African American women who endured miserable working conditions to bring it to fruition. The article was particularly moving for Amory to write, not only because it involved her hometown but also because it enabled her to discuss gardens with the spirit of social justice bequeathed to her by courageous parents.    Designed for “gardeners who read, and readers who garden,” the HORTUS Winter 2012 issue includes Amory’s article “Pilgrim Lilacs: ‘Making Poetry Out of a Bit of Moonlight,’” as well as an article by Athenæum author Judith Tankard on the best American gardening books of the past 25 years.  Amory is currently writing on Isabella Stewart Gardner as a gardener and the new greenhouses and plantings at the newly reopened museum for HORTUS Summer 2012.  David Wheeler will publish her piece on the Arnold Arboretum in four installments in 2013, allowing her to cover its swashbuckling plant hunters of the last century to  today’s cutting edge research on tropical and temperate forests across Asia as well as beloved local traditions like Lilac Sunday.