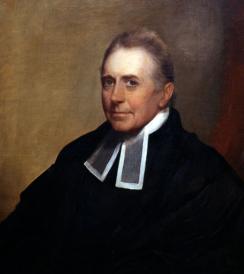 The Reverend Thaddeus Mason Harris, his son the naturalist Thaddeus William Harris, and grandson William Thaddeus Harris, a lawyer were all published authors, and all three were members or staff of the Boston Athenæum.  Their respective vocations ranged from theology, to entomology, to law and genealogy, but each generation earned his living at least part of the time as a librarian, primarily at Harvard though William Thaddeus Harris worked at the Athenæum as well.  The Harris family legacy comprises a trove of early American sermons, a landmark publication in the study of American insects, the transcribed epitaphs of two old cemeteries, and one enduring ghost story.

Thaddeus Mason Harris was born July 7, 1768 in Malden, Massachusetts to William and Rebekah (Mason) Harris.  His father had run a public writing school in Charlestown until the Revolution, when the British burned much of Charleston including the Harris property.  The family subsequently moved to Lancaster.  After a hand-injury thwarted his apprenticeship to a saddle-maker, young Thaddeus Mason Harris attended Harvard College, graduating in 1787 before settling down to teach school in Worcester.  He returned to Cambridge and Harvard in 1789 to obtain a theology degree, and served as librarian of the Harvard College Library from 1791 until 1793 when he was ordained as Unitarian minister of the First Parish Church in Dorchester.  In 1795 he married Mary Dix of Worcester, with whom he would have nine children.  Thaddeus Mason Harris contracted yellow fever during an 1802 epidemic and later traveled to Ohio, at the time a wild frontier state, later publishing an account of the journey.  He received a Doctorate of Theological Studies from Harvard in 1813 and saw many of his sermons published in his lifetime.  He resigned as minister from the First Parish Church in 1836 and died April 3, 1842 at Dorchester.  He is buried in the Old North Burying Place in Uphams Corner, Dorchester.

A lifetime member of the Athenæum, Reverend Harris was known to frequent the library in the afterlife as well. In a sketch which has become part of Boston Athenæum folklore, Nathaniel Hawthorne relates how, in 1842, he spotted the ghost of Reverend Harris reading his own obituary in that morning’s paper.  Hawthorne reports to have seen the Reverend Harris frequently at the Athenæum in the ensuing weeks, but hesitated to address him as they had never been properly introduced.  While visiting friends in England decades later, Hawthorne related the anecdote to his host who insisted he write it down for her.  The manuscript was later published in Living Age, February 10, 1900.

Thaddeus William Harris, the eldest child of Thaddeus Mason Harris and Mary (Dix) Harris, was born November 12, 1795 in Dorchester.  He fitted for college at Dedham and Bridgewater and received his A.B. degree from Harvard in 1815.  He went on to attend Harvard Medical School, receiving his M.D. in 1820 and later practicing medicine with Dr. Amos Holbrook of Milton, Massachusetts.  In 1824 he married Dr. Holbrook’s daughter Catherine, with whom he would have twelve children.

By 1819 Dr. Harris had developed a professional interest in botany and entomology, corresponding often with his colleagues in the natural sciences.  In 1831 he became Librarian of Harvard College, a full-time position which required him to relegate his scientific research and writing to his spare time only.  He nonetheless compiled the first systematic classification of American insects, and secured his reputation with the 1841 publication of his Treatise on Some of the Insects Injurious to Vegetation.  He authored dozens of articles on botany and entomology, regularly consulting books at the Boston Athenæum for his research.  His friend John Lowell was a co-founder of the Athenæum and Dr. Harris is reported to have recommended works on natural history for the library to purchase.  Thaddeus William Harris died in Cambridge, where he had lived most of life, in 1856.  He is buried in Cambridge’s Old Burying Ground.

William Thaddeus Harris, eldest child of Thaddeus William and Catherine (Holbrook) Harris, was born January 25th, 1826, in Milton, Massachusetts.  He suffered from a congenital curvature of the spine and lifelong frailty.  He entered Harvard College in 1842, excelling in Latin and philosophy and received his A.B. in 1846 and LL.B. and A.M. degrees from Harvard Law School in 1848.  He became editor of the New England Historical and Genealogical Register in 1849, and later worked as a librarian at both Harvard College and the Boston Athenæum from 1850 until 1851.  An ardent student of genealogy and local history, he published Epitaphs from the Old Cambridge Burying Ground in 1845 and was subsequently engaged by the Massachusetts Historical Society to revise the manuscript of Hubbard’s History of New England for its 1848 reprinting.  He later transcribed the epitaphs of the old burying ground in Watertown, to be published by his brother Edward in 1869 as Epitaphs from the Old Burying Ground in Watertown.  In 1853 William Thaddeus Harris was admitted to the Massachusetts Bar, though he never practiced law.  Owing to his feeble constitution, William Thaddeus Harris succumbed to illness on October 19, 1854, at twenty-eight years of age 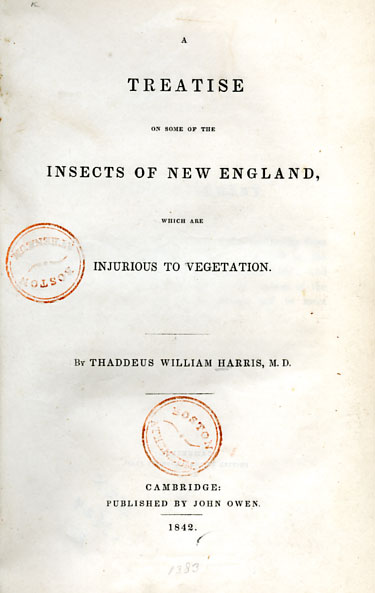 While there are many instances of Boston Athenæum membership as a family affair, the Harris family deserves a special distinction.  An aptitude for academic writing seemed to run in the Harris family, and librarianship itself, as career or short-term avocation, became a sort of family tradition.  Today it is mainly the ghost story by which the Harrises are remembered at the Athenæum, but this need not be the case.  A full-length biography of Thaddeus William Harris by Clark A. Elliott was published in 2008 in recognition of his importance to the history of science, while editions of his published correspondence can be read at the Boston Athenæum and other libraries.  The Boston Athenæum owns many of Reverend Harris’s sermons in their original editions which can by consulted by appointment, while William Thaddeus Harris’s epitaph transcriptions remain a valuable resource to genealogists on the trail of Cambridge and Watertown’s early residents.

Harris, Thaddeus William.  A Treatise on Some of the Insects of New England which are Injurious to Vegetation.
Cutter Classifiction
KZX .H24 t.2