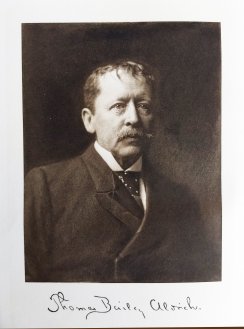 “Thomas Bailey Aldrich always seemed like a judge, so serious and dignified that one could not imagine him writing that extremely funny book, ‘The Story of a Bad Boy’” (34), writes Mary Jane Regan in Echoes from the Past; Reminiscences from the Boston Athenæum​ (1927). Others remember him differently: witty, affable, and youthful in his conversations with friends, though aloof with strangers and reticent about public speaking.

Though not as well known today as some of his contemporaries, Thomas Bailey Aldrich was a prominent literary figure of the late nineteenth century, praised by Nathaniel Hawthorne and emulated (though not without critique) by Mark Twain. Given the societal position and literary fame Aldrich achieved in his lifetime, his involvement in the Athenæum is perhaps unsurprising. When he joined, the library would have already housed many of his works on its shelves. Aldrich became a proprietor in 1884, three years into his tenure as the editor of The Atlantic Monthly, working out of an office just down the road at No. 4 Park Street with a view of the Old Granary Burying Ground.

How did Aldrich come to be this man of letters, remembered as the sometimes-somber creator of comedic tales? Born in Portsmouth, NH in 1836, Aldrich was the son of a businessman whose work took them to New Orleans for much of his childhood. At 13, he was brought back to Portsmouth to prepare for entry to Harvard, but abandoned those plans when his father died, leaving the family without adequate finances.

At sixteen, Aldrich moved to New York City to work as a clerk in his uncle’s office, where he took advantage of any break in the day’s work to pursue his own writing. He lived in the company of other writers and poets and began to publish poems and short stories. After the publication of a particularly well-received poem, “The Ballad of Babie Bell,” he acquired work first as a literary critic and then as an editor, and he had published his first collection of poems by age 19. He left New York to serve as a Civil War correspondent briefly, but returned to the city in 1862 and continued to work as an advisor for a publishing company until meeting his wife, Lilian Woodman. In 1865, they moved to Boston, where Aldrich became editor of the Every Saturday, a publication devoted to foreign literature, produced under the auspices of the publishing company owned by fellow Athenæum proprietors George Ticknor and James Fields. Aldrich appears to have made a happy home in Boston, settling in on Beacon Hill and praising the city for its “intellectual atmosphere” and “full-blooded readers.”

It was at this stage of life, contemplating boyhood and fatherhood in anticipation of the birth of his twin sons, that Aldrich wrote what proved to be his most impactful work, The Story of a Bad Boy. Set in Portsmouth, the semi-autobiographical novel chronicles the pranks and adventures of childhood. Tom’s hijinks stood in contrast to the moral tales dictating proper conduct that reigned as the standard for children’s literature. The Story of a Bad Boy is generally thought to be the first realistic depiction of childhood in American literature, and it provides telling insight into the culture of mid-nineteenth century white boyhood, both in its glorification of disobedience and in its subordinate treatment of non-white people and girls. The Story of a Bad Boy offered to the US what Thomas Hughes’s Tom Brown’s Schooldays had offered to England a decade before and began the “bad boy book” subgenre of American children’s literature, commonly typified by Mark Twain’s Adventures of Tom Sawyer and Adventures of Huckleberry Finn.

Published over the course of the first months of 1869 in the children’s serial Our Young Folks (a publication of the former Ticknor and Fields; at this time, Fields, Osgood, & Co.), The Story of a Bad Boy garnered wide popularity. Our Young Folks increased its subscribers by several thousand while the story ran, and once it was published in book form in 1869, it quickly went through 11 reprints. (The “Story of Bad Boy” in its original serialized form is available in the Athenæum’s special collections, and well worth a look.) Aldrich, who’d long sought to establish himself first and foremost as a lyric poet, gained an international reputation as a humorist.

After the dissolution of the Every Saturday in 1874, Aldrich spent his next five years free from work, writing and touring Europe and spending time with his wife and children. Aldrich became the editor of The Atlantic in 1881 and held the position for nine years before retiring. Under his leadership, the magazine saw a decrease in social and political commentary, and a bias toward traditional forms and subjects, reflective of Aldrich’s taste for what constituted praiseworthy literature. Among the writers whose work Aldrich published during this time were Sarah Orne Jewett, Charles Egbert Craddock (Mary Noailles Murfree), and perhaps most notably, Charles W. Chesnutt, the first African American writer to gain a foothold in the US publishing industry.

Aldrich spent the last 17 years as a self-described “man of leisure and letters,” continuing to write and publish novels and volumes of short stories and poetry. One of these, “The Unguarded Gates,” continues to be contentiously discussed in classrooms for its exclusionary argument against immigration. Aldrich also published “Old Town by the Sea,” a tour of Portsmouth, in 1893.

Aldrich died in 1907, with the quotable last words: “In spite of it all, I am going to sleep; put out the lights.” He was buried in Mount Auburn Cemetery. Apart from the writing he left behind, he is also remembered through the Thomas Bailey Aldrich House Memorial in Portsmouth, which preserves as part of the Strawbery Banke Museum Aldrich’s grandfather’s home—the setting of The Story of a Bad Boy.

From Greenslet’s The Life of Thomas Bailey Aldrich.