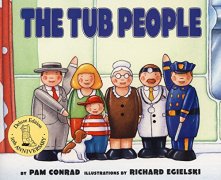 When a storm strikes a cargo ship, ten rubber ducks are tossed overboard and swept off in ten different directions. Based on a factual incident.

The Tub People by Pam Conrad; illustrated by Richard Egielski

A family of wooden toys lives on the edge of the bathtub until disaster strikes and they fear they have been separated forever.

When Molly’s stuffed rabbit gets lost, she and her parents imagine all the adventures it is having before returning home.

Olivia and the Missing Toy by Ian Falconer

When her best toy mysteriously disappears, Olivia the feisty pig is determined to find out who is responsible.

I Don’t Like Koala by Sean Ferrell; illustrated by Charles Santoso

Adam doesn’t like his stuffed koala because of its terrible eyes, terrible face, and terrible paws, but each time he tries to get rid of it, Koala comes back until Adam realizes that Koala is on his side.

A toy bear in a department store wants a number of things, but when a little girl finally buys him he finds what he has always wanted most of all.

Toys in Space by Mini Grey

A group of toys, left out at night for the first time, begin to be afraid but the WonderDoll distracts them by weaving a story of lost toys, space travel, and a strange alien.

Traction Man, a boy’s courageous action figure, has a variety of adventures with Scrubbing Brush and other objects in the house.

Nothing by Mick Inkpen

Left behind by the family in whose attic he has been staying, a thing who has forgotten his name tries to find out who he is.

The Apple Doll by Elisa Kleven

Lizzy is scared to start school, so she makes a doll out of an apple from her favorite tree to take with her on the first day and keep her company. Includes instructions for making an apple doll.

The Hanukkah Mice by Steven Kroll; illustrated by Michelle Shapiro

A family of mice enjoys the doll house and furnishings that Rachel receives as gifts on the eight nights of Hanukkah.

Charlotte does not like dolls, until she receives a special doll from her aunt and they become good friends.

“Christmas always comes to Nella’s house, but Santa Claus brings gifts only once in a while. That’s because it’s the Depression and Nella’s family is poor. Even so, Nella’s hoping that this year she and her two sisters will get a beautiful Baby Betty doll. On Christmas morning, the girls are beside themselves with excitement! There is Baby Betty, in all her eyelash-fluttering magnificence. ‘Mine!’ Nella shouts, and claims the doll for herself. But soon she discovers that Baby Betty isn’t nearly as much fun as her sisters. Would it be more fun to share this very best gift with them after all?” —Provided by publisher.

Princess Sparkle-Heart Gets a Makeover by Josh Schneider

Amelia and her best friend, Princess Sparkle-Heart, do almost everything together, so when the Princess suffers an accident, Amelia’s mother puts her sewing box to good use and makes the doll better than ever.

The Night After Christmas by James Stevenson

Tossed in garbage cans after they are replaced by new toys at Christmas, a teddy bear and a doll are befriended by a stray dog.

The Hidden House by Martin Waddell

With the owner gone, three dolls watch as their house becomes hidden by growing plants and trees until a man walks by and discovers the residence.

“Trixie, Daddy, and Knuffle Bunny take a trip to the neighborhood Laundromat. But the exciting adventure takes a dramatic turn when Trixie realizes somebunny was left behind.” —Provided by publisher.

William’s father gives him a basketball and a train but these do not make him want a doll less.

The Story of Holly and Ivy by Rumer Godden; illustrated by Adrienne Adams

“Ivy, Holly, and Mr. and Mrs. Jones all have one Christmas wish. Ivy, an orphan, wishes for a real home and sets out in search of the grandmother she’s sure she can find. Holly, a doll, wishes for a child to bring her to life. And the Joneses wish more than anything for a son or daughter to share their holiday. Can all three wishes come true?” —Provided by publisher.

A doll named Hitty recounts her adventures as she moves through a continually changing string of owners.

The Lonely Doll by Dare Wright

The story of a doll named Edith who had no one to play with and was very lonely.

A dollmaker cleverly schemes to pass his most beautiful doll off as a real girl, but he is outwitted by the townspeople he tries to deceive.

The Toys of Nuremberg by Lillian Sturges

The city of Nuremberg is famous for the toys made there, but the children who live there never get to play with them—until one night, the toys rebel.

The Velveteen Rabbit by Margery Williams

By the time the velveteen rabbit is dirty, worn out, and about to be burned, he has almost given up hope of ever finding the magic called Real.

The Doll in the Window by Pamela Bianco

A Christmas story about the merits of giving.

A doll named Candy Floss is very happy serving as Jack’s lucky charm at his stall at the fair, until a spoiled rich girl steals her.

A tiny doll lives an adventurous life in a little boy’s pocket and as a member of a gang of boys.

Memoirs of a London Doll, Written by Herself by Richard H. Horne

“Maria Poppet, a doll, has many adventures and misadventures as she passes through the hands of many owners.” —Provided by publisher.

Zach, Alice, and Poppy, friends from a Pennsylvania middle school who have long enjoyed acting out imaginary adventures with dolls and action figures, embark on a real-life quest to Ohio to bury a doll made from the ashes of a dead girl.

Madison Blackberry’s dolls—Wildflower, Rockstar, and Miss Selene—have lives that she envies, with their beautiful clothes and warm, cozy house, while she’s lonely most of the time.

The Miraculous Journey of Edward Tulane by Kate DiCamillo; illustrated by Bagram Ibatoulline

Edward Tulane, a cold-hearted and proud toy rabbit, loves only himself until he is separated from the little girl who adores him and travels across the country, acquiring new owners and listening to their hopes, dreams, and histories.

The Jamie and Angus Stories by Anne Fine; illustrated by Penny Dale

“From the moment Jamie sets eyes on Angus in the shop window, with his silky white coat and forlorn stare, he just knows that they belong together. On Christmas morning, they’re finally united and soon the toy Highland bull is Jamie’s constant companion.” —Provided by publisher.

The Mouse and His Child by Russell Hoban; illustrated by David Small

Six stories relate the adventures of three best friends, who happen to be toys.

“When a toy is bestowed with the title of ‘favorite,’ it takes on a coveted rank among the world of household things. But when a vengeful toy conspires to destroy these favorites, he must be defeated by a stuffed toy rabbit.”—Provided by publisher.

A family of porcelain dolls that has lived in the same house for one hundred years is taken aback when a new family of plastic dolls arrives and doesn’t follow The Doll Code of Honor. Annabelle Doll is eight years old- she has been for more than a hundred years. Not a lot has happened to her, cooped up in the dollhouse, with the same doll people, day after day, year after year…until one day the Funcrafts move in. Ann M. Martin and Laura Godwin, with the help of Brian Selznick’s remarkable illustrations, bring to life two wonderful families who prove that dolls are people, too!

The Mennyms by Sylvia Waugh

The Mennyms, a family of life-size rag dolls living in a house in England and pretending to be human, see their peaceful existence threatened when the house’s owner announces he is coming from Australia for a visit.

The Pasteboard Bandits by Arna Bontemps and Langston Hughes; illustrated by Peggy Turley

When he and his parents move to the quiet Mexican town of Taxco, Kenny makes friends with Juanito Perez, and the two share many adventures with Juanito’s special papier-mache toy, Tito.

“Miss Hickory is very worried. Her owner has moved to Boston, and how can Miss Hickory survive a harsh New Hampshire winter all alone? After all, she is just a doll whose body is an apple-wood twig and whose head is a hickory nut, and whose house is made out of corncobs. But Miss Hickory has ingenuity, and the help of neighbors like Crow, Bull Frog, and Ground Hog to see her through. And near the end of those cold, dark months, something unexpected happens to Miss Hickory—something even more welcome than the coming of spring.” —Provided by publisher.

The Silent Playmate: A Collection of Doll Stories edited and with an introduction by Naomi Lewis; illustrated by Harold Jones

“An anthology of doll stories, poems, and excerpts from novels, drawn from a variety of sources.” —Provided by publisher.