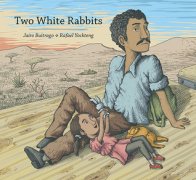 “In this moving and timely story, a young child describes what it is like to be a migrant as she and her father travel north toward the US border. They travel mostly on the roof of a train known as The Beast, but the little girl doesn’t know where they are going. She counts the animals by the road, the clouds in the sky, the stars. Sometimes she sees soldiers. She sleeps, dreaming that she is always on the move, although sometimes they are forced to stop and her father has to earn more money before they can continue their journey. As many thousands of people, especially children, in Mexico and Central America continue to make the arduous journey to the US border in search of a better life, this is an important book that shows a young migrant’s perspective.” — Provided by publisher.

How to Train a Train by Jason Carter Eaton; illustrated by John Rocco

A whimsical guide to training a “pet train” instructs young enthusiasts about important issues including where trains live, what they like to eat, and how to get them to perform the best train tricks.

Learn what it was like to travel on the transcontinental railroad in the 1860s.

An illustrated version of the song that answers the question “Where do little babies really come from?”

The Cows Are Going to Paris by David Kirby and Allen Woodman; illustrated by Chris Demarest

One day a herd of cows leaves the pasture and boards the train for Paris. The cows dress up in clothes and royally tour the city before returning home.

The Little Train by Lois Lenski

Engineer Small at the throttle takes the little train on its run from Tiny Town to the big city.

Easy-to-read, rhyming text describes the sounds of, and uses for, different kinds of trains.

All Aboard the Dinotrain by Deb Lund; Illustrated by Howard Fine

When dinosaurs seek adventure by taking a train ride, they find the trip has some unexpected surprises along the way.

Mister Whistler always has a song in his head and a dance in his legs. But when he has to catch the train, he is so distracted he loses his ticket—and has to dance his way out of his clothes to find it!

The Little Engine that Could by Watty Piper; with new art by Loren Long

Although she is not very big, the Little Blue Engine agrees to try to pull a stranded train full of toys over the mountain.

After being left by the side of a road with nothing but her favorite sock toy, Tupelo meets a pack of dogs led by Garbage Pail Tex as they are wishing for new homes, then joins them as they catch a passing train and share stories of dog heroes.

A magical train ride on Christmas Eve takes a boy to the North Pole to receive a special gift from Santa Claus.

Can You See What I See? : Toyland Express by Walter Wick

In this search-and-find story, children read the simple text and use the picture clues to search twelve photos for 100 hidden objects!

While travelling with her mother cross-country by train in 1896, a young girl unexpectedly shares Thanksgiving dinner with the notorious outlaw, Butch Cassidy.

Retells the life of the legendary African American hero who raced against a steam drill to cut through a mountain.

After a small setback, Mr. Putter and his favorite companions enjoy the best train ride of their lives.

Five Go Off to Camp by Enid Blyton

Spook trains in the dead of night. And they seem to vanish into thin air—but where do they go? The Famous Five are on to it. But the discovery of an unusual underground tunnel system and a secret train-service has them puzzled. If they follow the tracks, will they solve the mystery?

The Boundless by Kenneth Opel

Aboard “The Boundless,” the greatest train ever built, on its maiden voyage across Canada, teenaged Will enlists the aid of a traveling circus to save the train from villains.

The Invention of Hugo Cabret by Brian Selznick

When twelve-year-old Hugo, an orphan living and repairing clocks within the walls of a Paris train station in 1931, meets a mysterious toyseller and his goddaughter, his undercover life and his biggest secret are jeopardized.

A teenaged boy encounters one comedic calamity after another when his train strands him in the middle of nowhere, and everything comes down to luck.

The Train of States by Peter Sis

Gives information about each state, including capital, motto, state tree, state bird, source of name, and date of statehood.

Subway: The Story of Tunnels, Tubes, and Tracks by Larry Dane Brimner; illustrated by Neil Waldman

Underground railways, or subways, are an engineering marvel. But why were they built? How? Here is a high-speed tour of early subways from London to New York City to answer those questions and more.

Beneath the Streets of Boston: Building America’s First Subway by Joe McKendry

We Rode the Orphan Trains by Andrea Warren

“They were ‘throw away’ kids, living in the streets or in orphanages and foster homes. Then Charles Loring Brace, a young minister working with the poor in New York City, started the Children’s Aid Society and devised a plan to give homeless children a chance to find families to call their own. Thus began an extraordinary migration of American children. Between 1854 and 1929, an estimated 200,000 children, mostly from New York and other cities of the eastern United States, ventured forth to other states on a journey of hope.” — Provided by publisher.

Across America on an Emigrant Train by Jim Murphy

Combines an account of Robert Louis Stevenson’s experiences as he traveled from New York to California by train in 1879 and a description of the building and operation of railroads in nineteenth-century America.