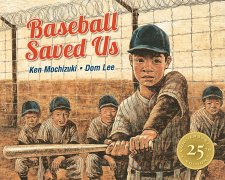 Historical Fiction set in the U.S.

When the Los Angeles riots break out in the streets of their neighborhood, a young boy and his mother learn the values of getting along with others no matter what their background or nationality.

A fictionalized account of how in 1849 a Virginia slave, Henry “Box” Brown, escapes to freedom by shipping himself in a wooden crate from Richmond to Philadelphia.

To win first prize in the Junior Cakewalk, Mirandy tries to capture the wind for her partner.

Baseball Saved Us by Ken Mochizuki, illus. by Dom Lee

A Japanese American boy learns to play baseball when he and his family are forced to live in an internment camp during World War II, and his ability to play helps him after the war is over.

“When Esquire magazine planned an issue to salute the American jazz scene in 1958, graphic designer Art Kane pitched a crazy idea: how about gathering a group of beloved jazz musicians and photographing them? He didn’t own a good camera, didn’t know if any musicians would show up, and insisted on setting up the shoot in front of a Harlem brownstone. Could he pull it off? In a captivating collection of poems, Roxane Orgill steps into the frame of Harlem 1958, bringing to life the musicians’ mischief and quirks, their memorable style, and the vivacious atmosphere of a Harlem block full of kids on a hot summer’s day. Francis Vallejo’s vibrant, detailed, and wonderfully expressive paintings do loving justice to the larger-than-life quality of jazz musicians of the era.” —Provided by publisher

The Gardener by Sarah Stewart

A series of letters relating what happens when, after her father loses his job, Lydia Grace goes to live with her Uncle Jim in the city but takes her love for gardening with her.

The Other Side by Jacqueline Woodson, illus. by E.B. Lewis

Two girls, one white and one black, gradually get to know each other as they sit on the fence that divides their town.

In 1776, after witnessing the execution of Nathan Hale in New York City, newly occupied by the British army, young Sophia Calderwood resolves to do all she can to help the American cause, including becoming a spy.

Serafina and the Black Cloak by Robert Beatty

“‘Never go into the deep parts of the forest, for there are many dangers there, and they will ensnare your soul.’ Serafina has never had a reason to disobey her pa and venture beyond the grounds of the Biltmore estate.There’s plenty to explore in her grand home, although she must take care to never be seen. None of the rich folk upstairs know that Serafina exists; she and her pa, the estate’s maintenance man, have secretly lived in the basement for as long as Serafina can remember. But when children at the estate start disappearing, only Serafina knows who the culprit is:a terrifying man in a black cloak who stalks Biltmore’s corridors at night. Following her own harrowing escape, Serafina risks everything by joining forces with Braeden Vanderbilt, the young nephew of the Biltmore’s owners. Braeden and Serafina must uncover the Man in the Black Cloak’s true identity…before all of the children vanish one by one. Serafina’s hunt leads her into the very forest that she has been taught to fear. There she discovers a forgotten legacy of magic, one that is bound to her own identity. In order to save the children of Biltmore, Serafina must seek the answers that will unlock the puzzle of her past.” —Provided by publisher

In 1960s New York, fifth-grader Ruthie, a Cuban-Jewish immigrant, must rely on books, art, her family, and friends in her multicultural neighborhood when an accident puts her in a body cast.

The Watsons Go To Birmingham — 1963 by Christopher Paul Curtis

The ordinary interactions and everyday routines of the Watsons, an African American family living in Flint, Michigan, are drastically changed after they go to visit Grandma in Alabama in the summer of 1963.

“Raymie Clarke has come to realize that everything, absolutely everything, depends on her. And she has a plan. If Raymie can win the Little Miss Central Florida Tire competition, then her father, who left town two days ago with a dental hygienist, will see Raymie’s picture in the paper and (maybe) come home. To win, not only does Raymie have to do good deeds and learn how to twirl a baton; she also has to contend with the wispy, frequently fainting Louisiana Elefante, who has a show-business background, and the fiery, stubborn Beverly Tapinski, who’s determined to sabotage the contest. But as the competition approaches, loneliness, loss, and unanswerable questions draw the three girls into an unlikely friendship—and challenge each of them to come to the rescue in unexpected ways.” —Provided by publisher

“When the Ku Klux Klan’s unwelcome reappearance rattles Stella’s segregated southern town, bravery battles prejudice in this New York Times bestselling Depression-era ‘novel that soars’ ( The New York Times Book Review) that School Library Journal called ‘storytelling at its finest’ in a starred review. Stella lives in the segregated South—in Bumblebee, North Carolina, to be exact about it. Some stores she can go into. Some stores she can’t. Some folks are right pleasant. Others are a lot less so. To Stella, it sort of evens out, and heck, the Klan hasn’t bothered them for years. But one late night, later than she should ever be up, much less wandering around outside, Stella and her little brother see something they’re never supposed to see, something that is the first flicker of change to come, unwelcome change by any stretch of the imagination. As Stella’s community—her world—is upended, she decides to fight fire with fire. And she learns that ashes don’t necessarily signify an end.” —Provided by publisher

It All Comes Down to This by Karen English

“This middle grade coming-of-age novel set in Los Angeles in the summer of 1965 is narrated by Sophie, a precocious, sheltered twelve-year-old. But when her family becomes the first African Americans to move into their upper middle-class neighborhood and riots erupt in nearby Watts, she learns that life—and her own place in it—is a lot more complicated than it had seemed.” —Provided by publisher

Esperanza and her mother are forced to leave their life of wealth and privilege in Mexico to go work in the labor camps of Southern California, where they must adapt to the harsh circumstances facing Mexican farm workers on the eve of the Great Depression.

P.S. Be Eleven by Rita Williams-Garcia

The Gaither sisters are back in Brooklyn, where changes large and small come to their household as they grow up during the turbulent 1960s.

“Twelve-year-old Annabelle must learn to stand up for what’s right in the face of a manipulative and violent new bully who targets people Annabelle cares about, including a homeless World War I veteran.”—Provided by publisher.

“Mia Tang has a lot of secrets. Number 1: She lives in a motel, not a big house. Every day, while her immigrant parents clean the rooms, ten-year-old Mia manages the front desk of the Calivista Motel and tends to its guests. Number 2: Her parents hide immigrants. And if the mean motel owner, Mr. Yao, finds out they’ve been letting them stay in the empty rooms for free, the Tangs will be doomed. Number 3: She wants to be a writer. But how can she when her mom thinks she should stick to math because English is not her first language? It will take all of Mia’s courage, kindness, and hard work to get through this year. Will she be able to hold on to her job, help the immigrants and guests, escape Mr. Yao, and go for her dreams?” —Provided by publisher.

After being sold to a cruel couple in New York City, a slave named Isabel spies for the rebels during the Revolutionary War.

A Northern Light by Jennifer Donnelly

In 1906, sixteen-year-old Mattie, determined to attend college and be a writer against the wishes of her father and fiance, takes a job at a summer inn where she discovers the truth about the death of a guest. Based on a true story.

“Nora Lopez is seventeen during the infamous New York summer of 1977, when the city is besieged by arson, a massive blackout, and a serial killer named Son of Sam who shoots young women on the streets. Nora’s family life isn’t going so well either: her bullying brother, Hector, is growing more threatening by the day, her mother is helpless and falling behind on the rent, and her father calls only on holidays. All Nora wants is to turn eighteen and be on her own. And while there is a cute new guy who started working with her at the deli, is dating even worth the risk when the killer likes picking off couples who stay out too late? Award-winning author Meg Medina transports us to a time when New York seemed balanced on a knife-edge, with tempers and temperatures running high, to share the story of a young woman who discovers that the greatest dangers are often closer than we like to admit—and the hardest to accept.” —Provided by publisher

“Fourteen-year-old Joan Skraggs, just like the heroines in her beloved novels, yearns for real life and true love. But what hope is there for adventure, beauty, or art on a hardscrabble farm in Pennsylvania where the work never ends? Over the summer of 1911, Joan pours her heart out into her diary as she seeks a new, better life for herself because maybe, just maybe, a hired girl cleaning and cooking for six dollars a week can become what a farm girl could only dream of—a woman with a future. Inspired by her grandmother’s journal, Newbery Medalist Laura Amy Schlitz relates Joan’s journey from the muck of the chicken coop to the comforts of a society household in Baltimore (Electricity! Carpet sweepers! Sending out the laundry!), taking readers on an exploration of feminism and housework, religion and literature, love and loyalty, cats, hats, bunions, and burn.s” —Provided by publisher