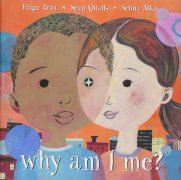 Neither! by Airlie Anderson

Because Neither is unlike both the rabbits and birds of the Land of This and That, it sets out to find a new place where all kinds of creatures are welcome.

Why Am I Me? by Paige Britt; illustrated by Sean Qualls and Selina Alko

In a poetic, philosophical exchange, two children of different races ask themselves why they are who and what they are, and speculate on how they could be different.

Crocodile Guji Guji was raised by a family of ducks and things are great until one day he meets three crocodiles who tell him that he isn’t a duck. When they ask Guji Guji to help them trap the ducks he feels torn and must decide who he is, what he is, and what’s really important.

A proper bulldog raised in a poodle family and a tough poodle raised in a bulldog family meet one day in the park.

Julián is a Mermaid by Jessica Love

While riding the subway home from the pool with his abuela one day, Julián notices three women spectacularly dressed up. Their hair billows in brilliant hues, their dresses end in fishtails, and their joy fills the train car. When Julián gets home, daydreaming of the magic he’s seen, all he can think about is dressing up just like the ladies in his own fabulous mermaid costume: a butter-yellow curtain for his tail, the fronds of a potted fern for his headdress. But what will Abuela think about the mess he makes—and even more importantly, what will she think about how Julián sees himself?

His mum is a spoon, his dad is a fork, and he’s a bit of both: he’s Spork, a utensil who just doesn’t seem to fit into the regimented world of the cutlery drawer, and this is his “multi-cutlery” tale, a humorous commentary on individuality and tolerance, that capture the experience and emotions of all who have ever wondered about their place in the world.

A punctuation mark feels bad that he doesn’t fit in with the others until a friend reveals the possibilities that exist when differences are accepted.

Wilbur, a naked mole rat who likes to wear clothes, is forced to go before the wise community elder, who surprises the other naked mole rats with his pronouncement.

Other students laugh when Rigoberto, an immigrant from Venezuela, introduces himself but later, he meets Angelina and discovers that he is not the only one who feels like an outsider.

Ling & Ting: Not Exactly the Same by Grace Lin

Ling and Ting are identical twins that people think are exactly the same, but time and again they prove to be different.

In three brief stories, Ivy, the younger of two fox sisters, goes along with her older sister’s schemes, even when they seem a bit daring.

We Are Growing! by Laurie Keller

“Walt is not the tallest or the curliest or the pointiest or even the crunchiest. A confounded blade of grass searches for his ‘est’ in this hilarious story about growing up.” —Provided by publisher

Can the friendship of best friends Harold and Hog, a carefree elephant and a careful hog, survive a game of pretending to be Mo Willems’s Elephant and Piggie?

Eager to do something her big sister has not done first, Jasmine Toguchi, eight, decides to pound mochi with the men and boys when her family gets together for New Year’s.

“When people look at George, they think they see a boy. But she knows she’s not a boy. She knows she’s a girl. George thinks she’ll have to keep this a secret forever. Then her teacher announces that their class play is going to be Charlotte’s Web. George really, really, REALLY wants to play Charlotte. But the teacher says she can’t even try out for the part . . . because she’s a boy. With the help of her best friend, Kelly, George comes up with a plan. Not just so she can be Charlotte—but so everyone can know who she is, once and for all.”—Provided by publisher

Emmaline and the Bunny by Katherine Hannigan

Everyone and everything in the town of Neatasapin is tidy, except Emmaline who likes to dig dirt and jump in puddles, and wants to adopt an untidy bunny.

Pie in the Sky by Remy Lai

Knowing very little English, eleven-year-old Jingwen feels like an alien when his family immigrates to Australia, but copes with loneliness and the loss of his father by baking elaborate cakes.

As Brave As You by Jason Reynolds

“When two brothers decide to prove how brave they are, everything backfires—literally.” —Provided by publisher

Eight-year-old EllRay’s father has promised a family trip to Disneyland if EllRay can stay out of trouble for a week, but not defending himself against Jared, the class bully, proves to be a real challenge.

The Tragic Age by Stephen Metcalf

“This is the story of Billy Kinsey, heir to a lottery fortune, part genius, part philosopher and social critic, full time insomniac and closeted rock drummer. Billy has decided that the best way to deal with an absurd world is to stay away from it. Do not volunteer. Do not join in. Billy will be the first to tell you it doesn’t always work—not when your twin sister, Dorie, has died, not when your unhappy parents are at war with one another, not when frazzled soccer moms in two ton SUVs are more dangerous than atom bombs, and not when your guidance counselor keeps asking why you haven’t applied to college. Billy’s life changes when two people enter his life. Twom Twomey is a charismatic renegade who believes that truly living means going a little outlaw. Twom and Billy become one another’s mutual benefactor and friend. At the same time, Billy is reintroduced to Gretchen Quinn, an old and adored friend of Dorie’s. It is Gretchen who suggests to Billy that the world can be transformed by creative acts of the soul. With Twom, Billy visits the dark side. And with Gretchen, Billy experiences possibilities. Billy knows that one path is leading him toward disaster and the other toward happiness. The problem is—Billy doesn’t trust happiness. It’s the age he’s at. The tragic age.” —Provided by publisher

“Self-proclaimed fat girl Willowdean Dickson (dubbed “Dumplin'” by her former beauty queen mom) has always been at home in her own skin. Her thoughts on having the ultimate bikini body? Put a bikini on your body. With her all-American beauty best friend, Ellen, by her side, things have always worked… until Will takes a job at Harpy’s, the local fast-food joint. There she meets Private School Bo, a hot former jock. Will isn’t surprised to find herself attracted to Bo. But she is surprised when he seems to like her back. Instead of finding new heights of self-assurance in her relationship with Bo, Will starts to doubt herself. So she sets out to take back her confidence by doing the most horrifying thing she can imagine: entering the Miss Clover City beauty pageant—along with several other unlikely candidates – to show the world that she deserves to be up there as much as any twiggy girl does. Along the way, she’ll shock the hell out of Clover City—and maybe herself most of all.” —Provided by publisher

Eleanor and Park by Rainbow Rowell

“Set over the course of one school year in 1986, this is the story of two star-crossed misfits—smart enough to know that first love almost never lasts, but brave and desperate enough to try.” —Provided by publisher

“In this story about the perils of popularity, the courage of nonconformity, and the thrill of first love, an eccentric student named Stargirl changes Mica High School forever.” —Provided by publisher

Presents the life of nine-year-old Audrey Faye Hendricks, who became the youngest known child to be arrested for picketing against Birmingham segregation practices in 1963.

Funny Bones: Posada and His Day of the Dead Calavera by Duncan Tonatiuh

” Funny Bones tells the story of how the amusing calaveras—skeletons performing various everyday or festive activities—came to be. They are the creation of Mexican artist José Guadalupe (Lupe) Posada (1852-1913). In a country that was not known for freedom of speech, he first drew political cartoons, much to the amusement of the local population but not the politicians. He continued to draw cartoons throughout much of his life, but he is best known today for his calavera drawings. They have become synonymous with Mexico’s Día de los Muertos (Day of the Dead) festival. Juxtaposing his own art with that of Lupe’s, author Duncan Tonatiuh brings to light the remarkable life and work of a man whose art is beloved by many but whose name has remained in obscurity.” —Provided by publisher

Anything But Ordinary Addie: The True Story of Adelaide Hermann Queen of Magic by Mara Rockliff; illustrated by Iacopo Bruno

“Some girls are perfectly happy never doing anything out of the ordinary. But Addie was anything but ordinary. She longed for thrills and excitement! At a time when a young lady appearing onstage was considered most unusual, Addie defied convention and became a dancer. And when she married the world-famous magician Herrmann the Great, she knew she had to be part of his show. Addie wanted to shock and dazzle! She would do anything to draw the crowds, even agree to be shot out of a cannon. But when Herrmann the Great died, Addie couldn’t disappoint her loyal fans — the show had to go on. What could she do? She would perform the show all by herself! ” —Provided by publisher

Malala Yousafzai and the Girls of Pakistan by David Aretha

When fifteen-year-old Malala Yousafzai spoke out against the Taliban’s policy of forbidding education for girls, an attempt was made on her life. This is her story, which also includes information on other hardships faced by young women in Pakistan.

Rad Women Worldwide: Artists and Athletes, Pirates and Punks, and Other Revoluntionaries Who Shaped History by Kate Schatz; illustrated by Mariam Klein Stahl

“A bold new collection of 40 biographical profiles, each accompanied by a striking illustrated portrait, showcasing extraordinary women from around the world.Featuring an array of diverse figures from Hatshepsut (the great female king who ruled Egypt peacefully for two decades) and Malala Yousafzi (the youngest person to win the Nobel Peace Prize) to Poly Styrene (legendary teenage punk and lead singer of X-Ray Spex) and Liv Arnesen and Ann Bancroft (polar explorers and the first women to cross Antarctica), this progressive and visually arresting book is a compelling addition to women’s history.”—Provided by publisher

A portrait of the passionate performer and civil rights advocate Josephine Baker, the woman who worked her way from the slums of St. Louis to the grandest stages in the world.