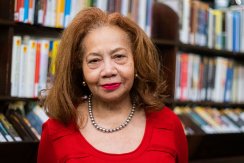 I first met Barbara Lewis in the summer of 2019 when she asked if she could enroll in the Athenæum’s first professional development workshop for educators, “Primary Sources in the Classroom: Teaching the Civil War.” Lewis wanted to participate in the workshop as both a UMass Boston educator and as a writer—she was working on a play set in 1867 that depicts a meeting between Harriet Beecher Stowe, Mary Jane Richards, and Clarence Reeves.

My first impression of Lewis turned out to match my lasting impression: She is uncommonly creative, insatiably curious, and an outstanding role model for all lifelong learners. She excels at finding and creating opportunities for exploring her wide-ranging interests. And she is ready to learn with and from nearly everyone.

Lewis was born after World War II in New York City. She grew up—surrounded by family—in both South Carolina and New York. Her maternal grandparents and other extended family were in South Carolina, while her mother’s ten siblings were in New York after having been part of the Great Migration. Lewis grew to love the “fastness” of New York and the “slowness” of South Carolina.

Lewis attended a parochial school for girls of color in South Carolina run by the Oblate Sisters of Providence, an order of Roman Catholic nuns founded in Baltimore by four Haitian women and a French priest in 1828. For high school, Lewis was sent to a convent school run by the Presentation Sisters in Montreal. There she studied under a British system, learning European history, French, and Latin.

From Montreal, Lewis went on to Hunter College in New York. But her experiences through high school had left her feeling out of place. She came to view her education, particularly in French and Latin, as something she loved, but as something that set her apart from others.

“I was so very different from everybody else. In South Carolina, I spoke with a northern accent. I tried not to, but it was there. And so, I was an outsider there. And in New York I was an outsider. In Canada…I was the only black student there. So, I was an outsider everywhere. And even though I coped very well intellectually, I didn’t necessarily cope that well emotionally. So, when I left Canada…I stayed away from French for quite a while. I didn’t want to see myself as so different from everyone else. It took me a long time before I went back and got a master’s [at City University of New York] in creative writing. I chose translation and I translated a novel from French. That took me back. I was like, ‘Hey, I’ve got this, I might as well use it.’”

Lewis didn’t stop with the master’s in creative writing. She continued on at City University, earning a PhD in theater, which she describes as having been fun! She reveled in studying theater, literature, theory, and performance all over the world. After studying German as a second reading language for her doctorate, Lewis moved to Vienna for a month to develop her conversational skills, taking side trips to Zurich and Munich to hear different accents.

Her transition from student to faculty began at New York University, where she taught freshman English (which she describes as “a rite of passage for so many”). She spent a short time at the University of Kentucky, and then arrived in Boston 15 years ago to lead the William Monroe Trotter Institute for the Study of Black History and Culture at University of Massachusetts Boston. As an academic, Lewis has specialized in the work of August Wilson, Black female playwrights, and Francophone literature. Only after coming to Boston did Lewis learn through her research that her great-great grandfather, born in the Berkshires, volunteered for the 54th Massachusetts and fought in Company B.

But Lewis has not limited herself only to academic writing. She takes her creative writing seriously. She is constantly seeking new research opportunities, improving and refining her writing, and building her community of fellow creative thinkers and makers. She has participated in Company One’s PlayLab, taken classes at GrubStreet, and joined the Athenæum’s Writers’ Workshop. She became a Mudge Education Associate at last year’s Athenæum workshop for educators so she could conduct research with the BA’s Civil War-era materials to inform her play. She attends two different sewing/knitting book groups. And all of that before she retired from UMass Boston at the end of 2019!