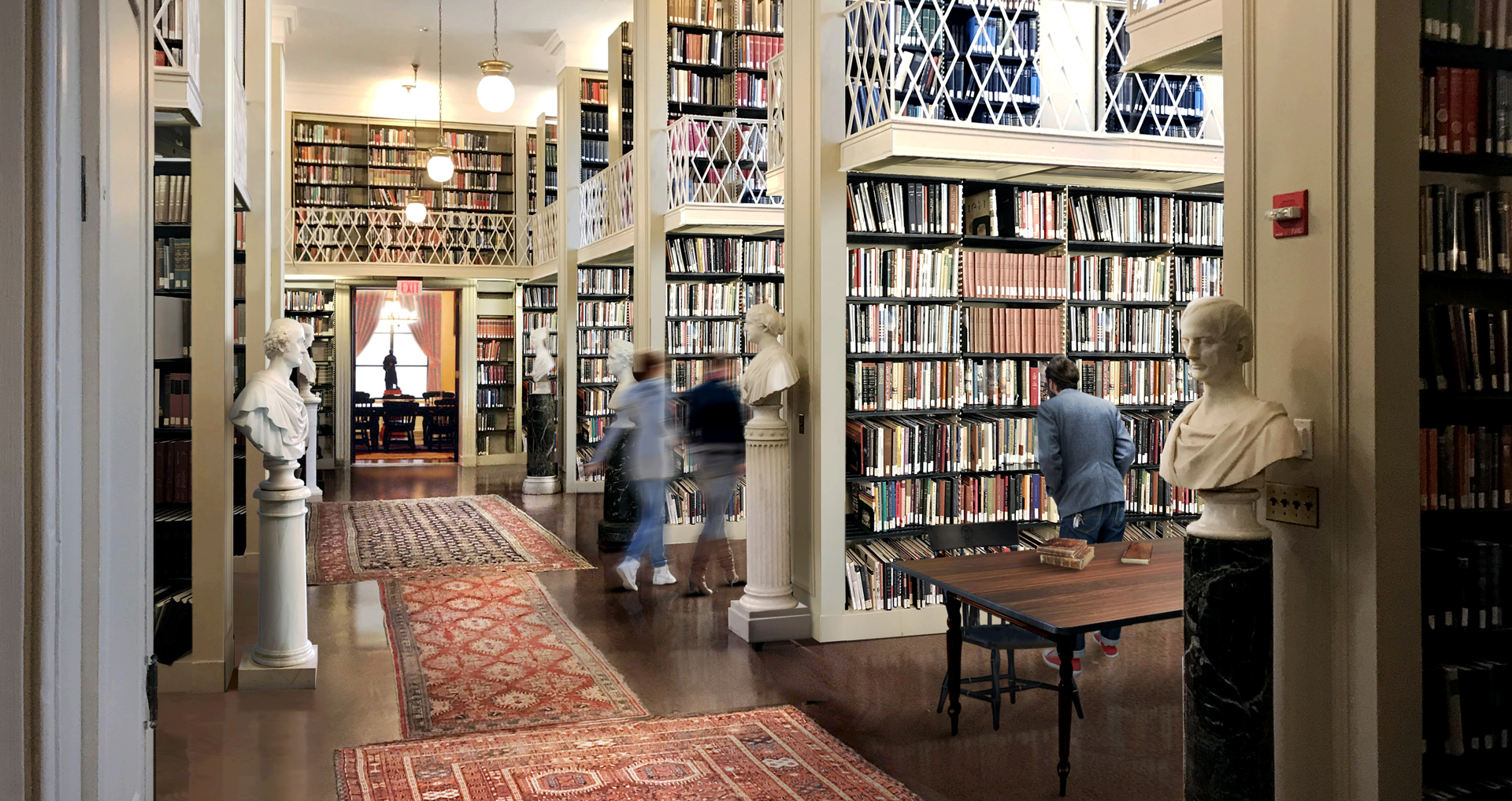 About the Boston Athenæum

The Boston Athenæum – a unique combination of library, museum, and cultural center in a magnificent landmark building.

We are one of the country’s oldest and most distinguished independent libraries, with a circulating collection of over half a million books, from works published in the 1800s to the latest best sellers. Special collections include active research holdings of 100,000 rare books, maps and manuscripts, and 100,000 works of art, from paintings and sculpture to prints and photographs.  Members, visitors, and the community enjoy a year-round schedule of cultural programming – author talks, book clubs, exhibitions, concerts, social gatherings, and opportunities for connection.

We are united by curiosity about literature, culture, art, ideas, and the world.

Founded in 1807, the Boston Athenæum evolved out of an organization known as the Anthology Society, formed in 1805 by a group of Bostonians who produced a magazine called The Monthly Anthology and Boston Review. They created the Boston Athenæum to form an establishment “combining the advantages of a public library [and] containing the great works of learning and science in all languages.”

The Athenæum had an itinerant life in its early years. Its original home was on Congress Street, but it soon moved to Tremont Street near the present-day Government Center. In 1809, it moved to the Rufus Amory House, adjacent to the King’s Chapel Burial Ground. And it moved again in 1822 to a mansion on Pearl Street, where it remained for nearly thirty years.

During this time, the Athenæum flourished in culture-starved Boston and grew rapidly as it voraciously acquired books, art, and artifacts. An art gallery was added in 1827, and the library began a series of yearly exhibitions of American and European art. For nearly half a century, the Athenæum was the unchallenged center of intellectual life in Boston, and by 1851, had become one of the largest libraries in the United States.

Construction on the Athenæum’s present home on Beacon Street began in 1847. Designed by Edward Clarke Cabot, the building opened in 1849, with a sculpture gallery on the first floor, the book collection on the second, and a painting gallery on the skylit third floor. The fourth and fifth floors were added in a major renovation in 1913-1914 designed by Henry Forbes Bigelow. The building was named a National Historic Landmark in 1965. From 1999 to 2002, a major renovation brought year-round climate control to the entire building and incorporated new space in the basement levels and first floor of the adjoining building at 14 Beacon Street. In 2022, a revitalization of the landmark building and an expansion into an adjacent building were designed by Ann Beha of Annum Architects.

Today, the Athenæum’s five galleried floors of books and reading nooks overlook the peaceful Granary Burying Ground. Its research books and collections have strengths in Boston history, New England state and local history, and in the fine arts. The Athenæum supports a dynamic exhibition program and hosts a lively series of events, discussions, and concerts.

As Gamaliel Bradford wrote in 1931, “It is safe to say that [no library] anywhere has more an atmosphere of its own, that none is more conducive to intellectual aspiration and spiritual peace.”

The Boston Athenæum is a member-supported not-for-profit institution that everyone is invited to join.