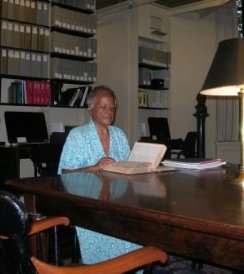 Not all who find a congenial space to write at the Athenӕum are professional authors earning a living from their intellect and imaginations, their pens and keyboards. Beverly Hector-Smith is one of the many amateurs who find what they need at 10½, and she recently was surprised to be asked to write for a publication. She never thought she could or would write anything that anyone outside her family would be interested in, but at an event, Brenton Simons, president of the New England Historic Genealogical Society, brought the editor of American Ancestors over to meet her and encouraged them to talk. Beverly had been considering sharing her research with her family, but she had never dreamed of publishing anything. To use her grandmother’s favorite expression, that would have been “too much pork for a shilling,” or as she understood it, “way too much to expect.” Why her grandmother used to say this is just one of the many questions about small, intimate details that inspired her to research her family history.

Beverly was born March 5, 1937 in Boston. Her mother and father, both born in Massachusetts, were in a long line of ancestors from the New England area. A graduate of Boston City Hospital Nursing, Simmons College, and Boston College, Beverly was a nurse for over fifty years and a nurse practitioner, qualified to offer certain treatments without a doctor’s supervision, from 1980. Working at Children’s Hospital, her hectic schedule often made her miss her train at Back Bay station, and she started visiting the public library to pass the time. According to family lore, her second great grandfather had lived on Stanhope Street in the Back Bay area. She thought she would start with the Boston Directories to confirm his home, but the sources did not support what she had heard all her life. She realized she loved researching; she enjoyed looking, even when answers could not be found, and she learned a lot she had not originally been seeking.

“What else don’t I know?” That question led her to the library stacks and brought her back, again and again, as she gleaned more information from both libraries and family members. One cousin gave her a sheaf of documents; another relative, a proprietor, introduced her to the Athenӕum and sponsored her for a couple years, but then Beverly decided to join on her own. After her retirement in 2006, she finally had ample time to focus on her many unanswered questions.

Most of her research has benefitted from the specialized resources at the New England Historic Genealogical Society, but she has found some at the Athenӕum. (For instance, the Boston Directories are in the reference stacks on the second floor and their worn condition reflects their usefulness to many members over the years, and members will soon be able to access them online as part of the Athenӕum’s digital collections.) What she has especially valued is a quiet place to write where she can ask for help when she needs it. As she finished her article, she was a fixture at the end of the table in the reference department where she could easily access the directories and the reference librarians. She learned that being published includes, in an ideal world, being edited. She had learned so much more than could be included in the article, which focused on one ancestor. Beverly continues her research and is writing a larger document for her family to enjoy. Members will no doubt see her in the stacks of the Athenӕum.