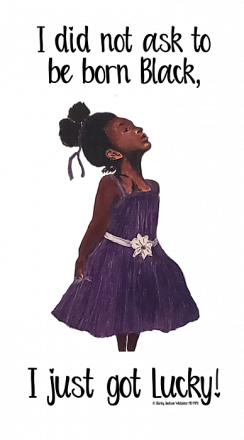 Celebrate Black History Month with these books all about Black Joy.

I Did Not Ask to be Born Black I Just Got Lucky written and illustrated by Shirley Jackson Whitaker MD MPH
(New Picture Book Basket)
The first children’s book from a local artist and medical doctor, this poetic and beautifully illustrated book is a celebration of African girls’ beauty and spirit. The perfect book for all families to read and start a discussion about what true beauty is.

Zuri Ray Tries Ballet by Tami Charles illustrated by Sharon Sordo
(New Picture Book Basket)
Zuri loves trying new things with her best friend Jessie. The two do everything together and always like the same things, until ballet camp. Jessie is happy as can be doing pirouettes in a pink tutu, but Zuri can’t find her balance and feels uncomfortable in the ballet clothes. Will Zuri be able to find a way where she and her best friend can have fun at ballet camp? Perhaps her family will help inspire her.

Magic Like That by Samara Cole Doyon illustrated by Geneva Bowers
(New Picture Book Basket)
While her mother gives her a new hairstyle, a young girl reflects on what her hair means to her. Each hairstyle her mother has given her has reflected different things in nature and made her feel empowered in a different way. Her mother works magic with her hair!

Your Name is a Song by Jamilah Thompkins-Bigelow
(New Picture Book Basket)
A young Black girl meets her mother after the first day of school and is distraught after so many teachers and students mispronounced her name. On their walk home, the mother explains the musicality of the child’s name and other names from various cultures. The next day the girl feels empowered to share this knowledge with her class and teach them all to sing her name. This vividly illustrated book is great for starting a conversation about respecting different names and cultures. It is also a great book for learning to read as it teaches children to break a word down into syllables.

Sulwe by Lupita Nyong’o illustrated by Vashti Harrison
(New Picture Book Basket)
Lupita Nyong’o crafts a beautiful story about the harm of colorism and the the power of seeing your own beauty. Sulwe’s skin doesn’t match that of her family members, or the kids at school. She feel alienated and like she isn’t as beautiful as her lighter skinned sister. Through her mother’s wisdom and a magical journey through the night sky, Sulwe learns to see the beauty in herself and how to show it to others. With illustrations as beautiful as the night sky, this story is equal parts heart wrenching and heartwarming.

The Vanderbeekers of 141st Street Series by by Karina Yan Glaser
(PZ7 .G48 Van 2017)
The Vanderbeekers have lived in their home on 141st street for so long it’s practically a member of the family. When their grouchy landlord decided to not renew their lease, the five siblings must find a way to convince him to let them stay. But they only have 11 days!

Fast Pitch by Nic Stone
(PZ7.S8825 Fas 2021)
Shenice Lockwood is determined to lead her team, the Fulton Firebirds, to win the regional softball championship. As the only all Black team in the league, the Firebirds work twice as hard to prove that Black girls belong at bat. When her great-uncle Jack reveals that a career-ending—and family-name-ruining—crime may have been a setup, Shenice’s focus is tested. Will she be able to lead her team to victory and uncover the truth about her family’s past?

The Season of Styx Malone by Kekla Magoon
(PZ7.M2722 Se 2018)
Caleb Franklin and his brother Bobby Gene are looking forward to a summer of adventures in the woods near their house. But Caleb wishes this summer could bring something different and they could venture away from their small town. Their dad won’t allow it. Then Styx Malone moves to town. Styx is older and cooler than the brothers. He’s been to lots of different places and claims to know a way that Caleb can get what he wants: The Great Escalator Trade. The boys begin to trade a small thing for something better, hoping to exchange their way to their wildest dreams. As the trades get larger, the brothers find themselves over their heads and lost in Styx’s secrets. This friendship adventure is a perfect glimpse into summer for a winter read.

EllRay Jakes is a Rock Star! by Sally Warner illustrated by Jamie Harper
(PZ7.W2444 Elr 2012)
All the boys at school in EllRay’s class have something to brag about. But Ellray feels plain. His family doesn’t provide anything good to show off either. His dad is a geologist. And rocks are so boring. Then EllRay sees some crystals in his dad’s office. Excited about how cool looking they are and how much his classmates will like them, EllRay “borrows” the crystals. His dad will never know and he’ll have the crystals back in no time. That is, until things go awry. Will EllRay be able to get the crystals back before his dad knows they are gone? Join EllRay on this adventure and many others in the series.

From the Desk of Zoe Washington by Janae Marks.
(PZ7.M333 Fr 2020)
On Zoe’s twelfth birthday, she receives a letter from her father whom she has never met. He has been in prison her whole life for a crime he says he never committed. Zoe is now determined to uncover the truth and hopefully prove his innocence. She has a good cover for her stress about the investigation: her family thinks she is worrying about doing a good job at her bakery internship to prove she can audition for a television cooking competition. Will the stress from the internship and her father’s conviction be too much for Zoe to balance? Or will she find the right recipe for success?

With the Fire on High by Elizabeth Acevedo
(PZ7 .A1822 Wi 2019)
From the acclaimed author of The Poet X, comes a tale of a young chef who chases her dreams despite the things in life that set her back. High school senior Emoni has a lot on her plate with her daughter and abuela to care for. The one place she can let go of her responsibilities is the kitchen. When her school starts a culinary arts class, she knows she doesn’t have time for the course’s trip to Spain. She feels it would be best to give up on her dreams of being a chef, but once Emmoni starts cooking, she must let her talent break free.

Piecing Me Together by Renée Watson.
(PZ7.W3235 Pi 2017)
Jade dreams of success despite the obstacles society has placed around her. Jade has been a scholarship student at a predominantly white private school for two years. Despite her mother struggling to make ends meet at home, the school has afforded her many opportunities that may help her achieve her dreams outside of her neighborhood. As her time at the school goes on, these opportunities start to like judgement and pity. Especially when her white guidance counselor suggests she join the Woman to Woman mentorship program. She is paired with a black mentor who tries too hard to relate to Jade despite their great financial (and therefore life) differences. She can’t help but feel her mentor sees her as a charity case in need of saving. Through her passion for collage and photography, Jade finds her voice and begins to advocate not only for herself, but for her community. This Coretta Scott King Book Award Winner and Newbery Honor Book is an uplifting tale of the power of art, community, and friendship.

Pride by Ibi Zoboi.
(PZ7.Z76 Pr 2018)
In this modern retelling of Pride and Prejudice, Zoboi balances the original love story with a discussion of cultural identity, class, and gentrification. Zuri Benitez is proud of her neighborhood, family, and community. But her pride may not be enough to save her neighborhood from gentrification. When the wealthy Darcy family moves in, Zuri does her best to avoid their two teenage sons. As her sister falls for Ainsley Darcy, that avoidance becomes impossible. Zuri cannot stand Darius and his judgmental and arrogant demeanor. However, as Zuri and Darius are forced to spend more time together, their initial disdain turns into understanding, and perhaps something more.